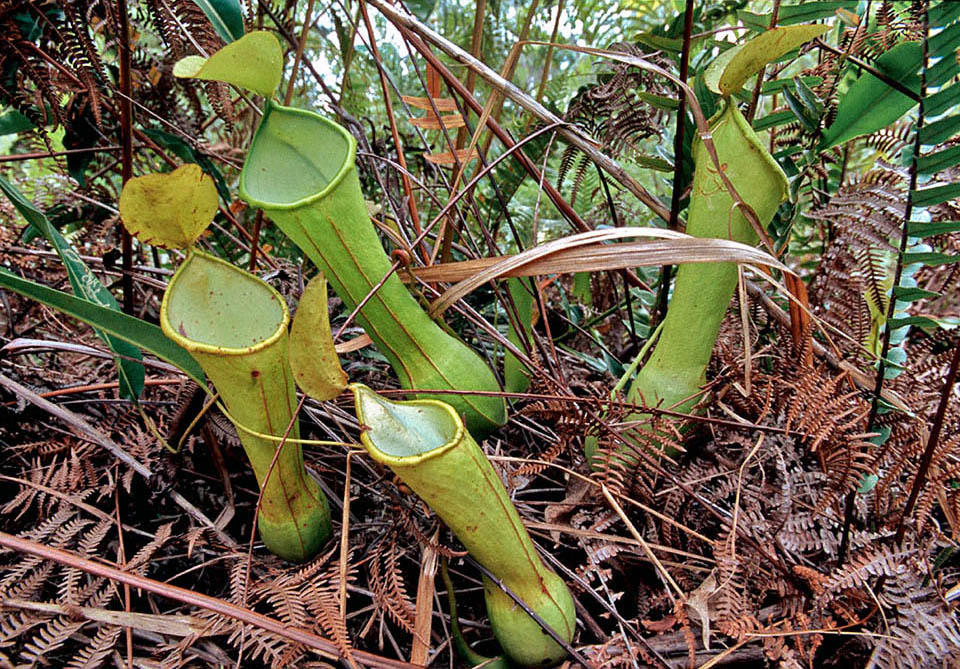 The Nepenthes alata s.l. basal ascidia are sub-cylindrical, slightly narrowed at the centre with two winged ribs going from top to bottom in the fore part in order to facilitate the capture of mainly creeping insects. In the recent past it was thought that it had a much ampler range, but now some are considered as different species © Jeremy Holde

Nepenthes alata Blanco (1837), belonging to the family Nepenthaceae, is a tropical carnivorous plant endemic to the northern and central part of the island of Luzon (Philippines).

In the past, it was thought that it had a much wider range including the major islands of the archipelago of the Philippines, excluding the island of Palawan. This motivation arose from the conviction that this species was a polymorphic species with morphological variations depending on the growing areas. However, after a new redefinition, the southernmost plants of the Island of Luzon and those of the other islands, previously referred to this species, are actually different species.

Nepenthes alata lives in the wooded highlands of the Central Cordillera, rarely in Zambales and Sierra Madre, at altitudes between 550 and 1.650 (1.900) metres, in conditions of high temperature and very high atmospheric humidity. 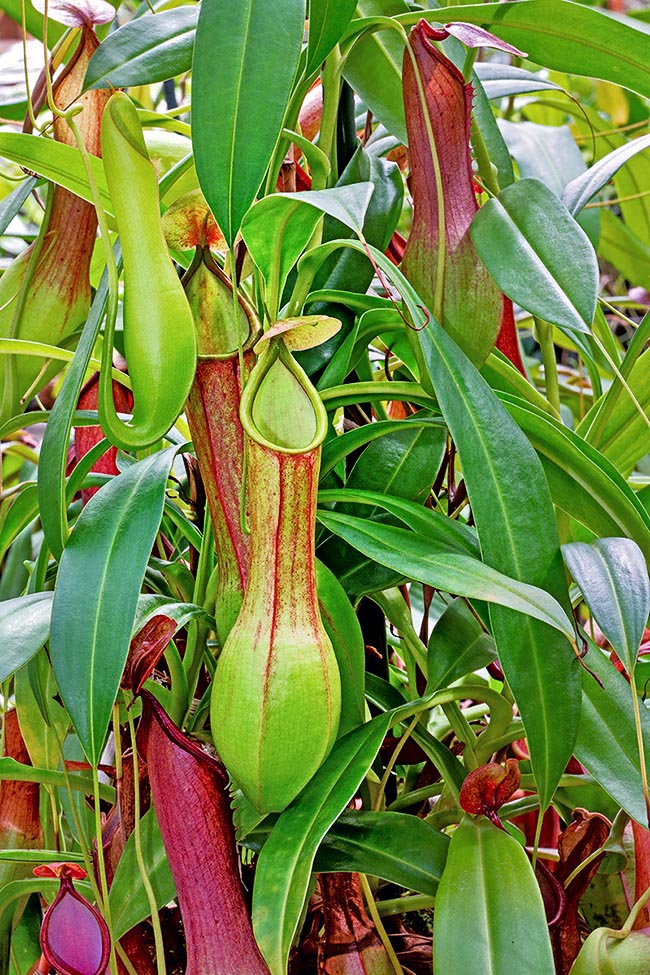 The ascidia of up to 4 m climbing stems are a little smaller than the lower ones, 8 to 15 cm tall. The operculum is raised to 45° on the horizontal plane to prevent the rain from diluting the digestive liquids © Giuseppe Mazza

The name of the genus Nepenthes comes from the old Greek adjective νηπενθής, nipenthos, formed by the negative prefix “nê, non”, and the name πένθος, penthos “sadness, pain”. Adjective used by Homer to indicate the drink “nepenthes pharmakon” that Helen, furtively, has poured into the wine that Telemachus, son of Odysseus, and Menelaus, prince of Mycenae and her husband, were drinking with the purpose of soothing, thanks to its effect of wiping off memories, the pain and the homesickness for the distance from their native country.

The specific epithet comes from the Latin alatus, “wing” and was given to this species by the Spanish friar Manuel Blanco (1779-1845) due to the membranous extensions like wings present on the ascidia of the plants he had found in Vintar (Ilocos Norte, Philippines).

Nepenthes alata has up to 4 m tall climbing stems, persistently pubescent, with bright green leaves, mostly scattered, rarely alternate, with petiole, somewhat coriaceous, lanceolate-ovate, 10 to 20 cm long and 2 to 5 cm broad, acute or incised only at the apex. The flap gradually fades on the petioles that are winged, 6 cm long, and embrace part of the stem.

The young leaves are covered by dense and long white or reddish hairs that often hide the epidermis. With the growth the pubescence tends to disappear from the stems and from the lower pagina of the leaves. The median vein of the leaves extends into a tendril which widens at the apex to assume the shape of a cup, the so-called ascidium (from the Greek ἀσκίδιον, “small wineskin”), inside of which forms a cavity that represents the trap these plants use to seize their preys.

The basal ascidia are sub-cylindrical, slightly narrowed at the centre with two winged ribs going from top to bottom in the front with small teeth at the margins for catching the crawling insects. The opening of the ascidium is oblique with a reinforced margin (peristome) of red colour. The ascidia of the climbing stems are slightly smaller than the lower ones, 8 to 16 cm tall, rarely up to 25 cm, with wings fringed at the top for catching the flying insects, and outer surface covered, for more than the 50%, of small white starred hairs, 0,2 mm broad, standing side by side. 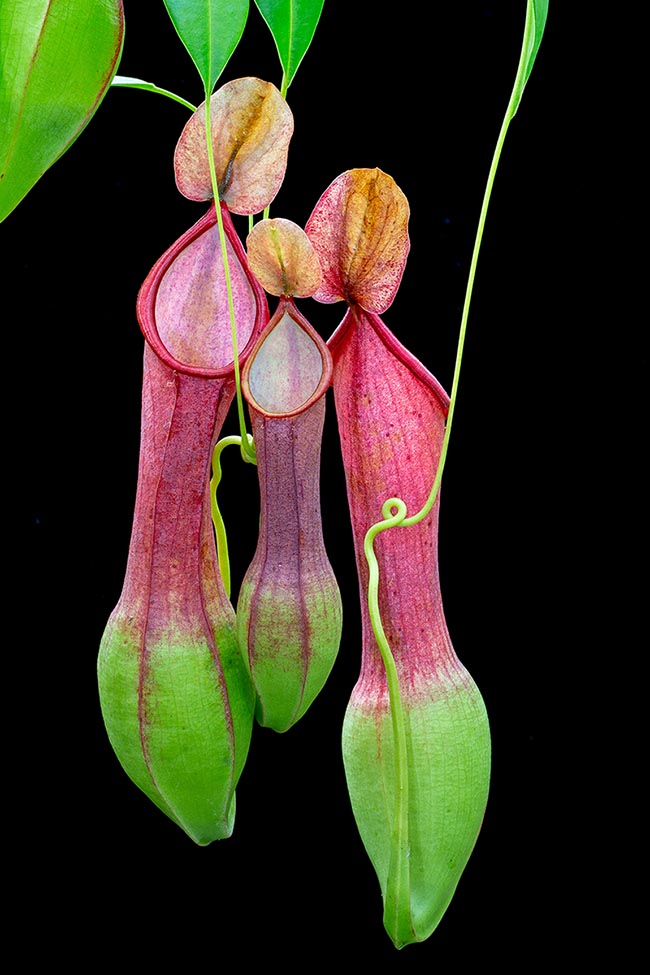 In cultivation these plants require an optimal temperature around the 25-26 °C, whilst the lowest must never drop under the 15-18 °C, so it is good to keep them in a container at controlled temperature and humidity © G. Mazza

The operculum is flat, ovate, longer than wide, with nectariferous glands, raised to 45° on the horizontal plane to prevent rain to dilute digestive fluids.

At the base of the lid stands a whole and sharply pointed spur. The ascidia are of pale green colour, often with reddish or violaceous spots.

The flowers are unisexual and grouped in male and female racemose inflorescences on different plants. The female inflorescences are like the male ones but are averagely shorter.

Each flower is formed by four tepals and is supported by a 10-15 mm long peduncle.

The male flowers have the stamens with the filaments merged in column, and exceed, anthers included, the tepals of about 5 mm.

The animals, usually insects and small invertebrates, are attracted by the sugary nectar and by the colour of the ascidium and once entered they do not have any more the possibility to get out and die inside. Later, they are slowly decomposed through a series of enzymatic processes that degrade their tissues reducing them to nitrogen compounds assimilable by the plant.

A study done on the ascidia of Nepenthes alata reveals that this plant can regulate the quantity of digestive enzymes in base to the availability of the preys.

This is explained because these plants live in conditions poor in nutrients and it would be very wasteful to produce continuously digestive fluids.

In fact, the researchers have discovered that the genes responsible to produce the digestive enzymes activate as a response to certain stimuli. The presence of insects with chitin exoskeleton induces, in 24-48 hours, an increase of digestive enzymes that gradually decrease as the insects are digested.

The genetic ways induced by the presence of chitin are the same as those observed as defense of the plant against the attacks of these animals. Moreover, these defensive reactions serve to prevent the development of microbial pathogens inside the ascidium. In fact, many different enzymes that Nepenthes alata has produced inside the ascidia are proteins linked with the defense. This is strong evidence sustaining the hypothesis that the “carnivory” in the plants has evolved from already existing defensive solutions.

This is a further demonstration that the evolution does not occur always through new paths but, conversely, simply, reorganizing capacities already existing to adapt them to new challenges, in this case for colonizing environments poor in nutrients (nitrogen and phosphorus), otherwise not colonizable. 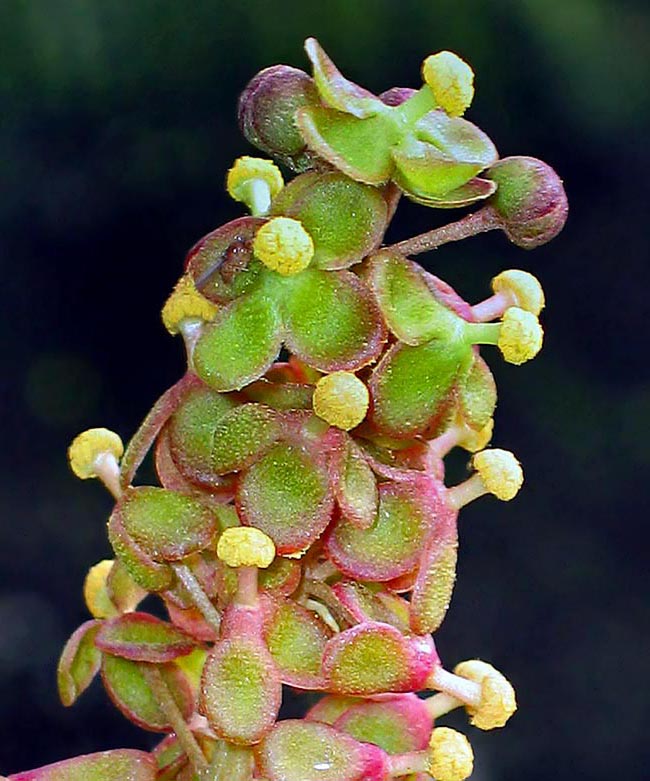 Nepenthes alata is a plant very popular in cultivation. In any case it is necessary to make some distinctions because the exact identity of this species might be doubtful.

In accordance with this, since some years, the horticulturists recognize, informally, the plants of “Nepenthes alata hairy” as distinct from the glabrous “Nepenthes alata typical” (= Nepenthes graciliflora Elmer) that has been for long time diffused in cultivation.

Regardless of the correct systematics, these plants, if cultivated, require an optimal temperature around the 25-26 °C, whilst the lowest must never be less than 15-18 °C, therefore they need a container with controlled temperature and humidity (terrarium).

In the subtropical zones they can be kept in open air, only in summer, regularly watered, without water stagnation in the growing soil and in a luminous place not exposed to the sun if not for a few hours. Being epiphyte plants, the soil of growth must be well drained, formed by loam of vegetal nature, like those for the cultivation of the orchids, made with bark of pine or fir of large size. It is possible to utilize also a loose soil formed by 40% of peat or coconut fibre, 30% of perlite or vermiculite and the 20% of siliceous sand and the 10% of expanded polystyrene. The plants do not require fertilization.

The multiplication can be done by seed, in spring, by cutting. The repotting, being the plant in continuous vegetation, can be done in whatever season, provided the root system is not damaged.

For what its survival is concerned, the Red List IUCN (2014) judges Nepenthes alata a species at low risk (Least Concern, LC); however, its collection is forbidden, being protected by the Convention on International Trade in Endangered Species (CITES)

Nepenthes alata was last modified: May 10th, 2022 by Peppino