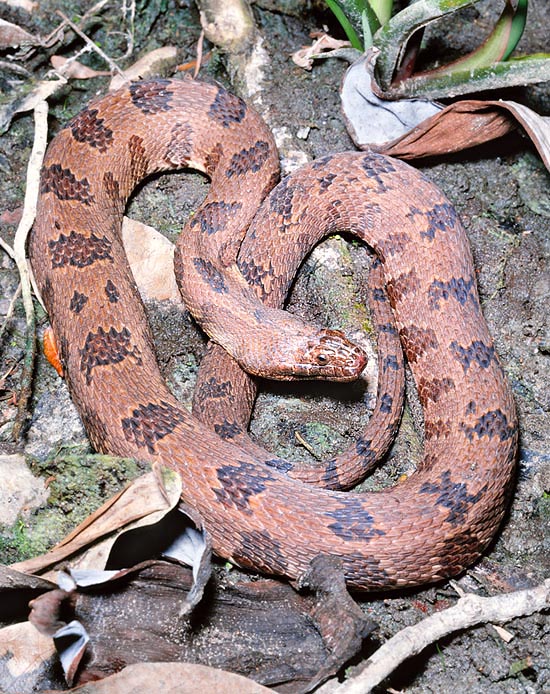 The North America hosts several aquatic serpents, amongst which the genus Nerodia, that stands out due to the number of different species and subspecies.

The Brown water snake or Brown Nerodia (Nerodia taxispilota Holbrook, 1838)), by some colloquially called Moccasin, with consequently easy confusion with the far more harmful Cottonmouths, is a typical species of the south-eastern part of USA, especially of the coastal plains, from southern Alabama to Florida and then, northwards, to great part of Georgia, Carolina and Virginia.

Known also as Natrix taxispilota Cope, 1889, it belongs to the family of the Colubrids (Colubridae), subfamily (Natricinae) and is called, in English, American brown water snake and in German Braune Wasserschlange or Braune Schwimmnatter.

The preferred habitat is formed by possibly calm waters, lakes, ponds and swamps, but it can be found also along the rivers, possibly where are present trunks fallen into the water, on which these reptilians willingly stay, motionless, for hours.

It is a good climber and it may reach even several metres of height on the plants, especially if there are branches protruding over the water, from which it can quickly jump (even from a remarkable height), when a boat is getting close.

This characteristic, along with a fighting spirit, has given origin to many legends, after which this serpent should purposely jump into the passing-by boats, and then bite their passengers. Actually, for whom sees falling down into the boat, with a thud, a metre and a half long, big serpent, and even much alike a venomous water moccasin, it can reveal unpleasant, also because, feeling trapped, the animal will tend to react and to bite with enthusiasm and, seen its size, the bites can cause bleeding lesions to the skin. It is matter, in fact, of a big serpent, long, as an average, between the metre and the 160 cm, even if there are reliable reports about more than 170 cm long specimens.

And not only the length is remarkable, but also the diameter, which is why the nerodias do have a robust and heavy appearance, even if, when in water, the can swim as gracefully as the eels. The females tend, like many other species of serpents, to be bigger than the males.

The head is wide and relatively flattened, for triangular shape, or better, heart-shaped, and for this it is quite easy that these serpents are mistaken with the Agkistrodon piscivorus (and vice versa), seen the greatly overlapping habitat and geographic diffusion, the eye, however, is already an important distinctive character, as in the Nerodia taxispilota it is placed much higher, probably in function of the aquatic life, which explains why, when looking the animal from above, the eyes are clearly visible, whilst those of the water moccasin are not so, as they are more lateral; furthermore, the pupil is round instead of elliptic and vertical. 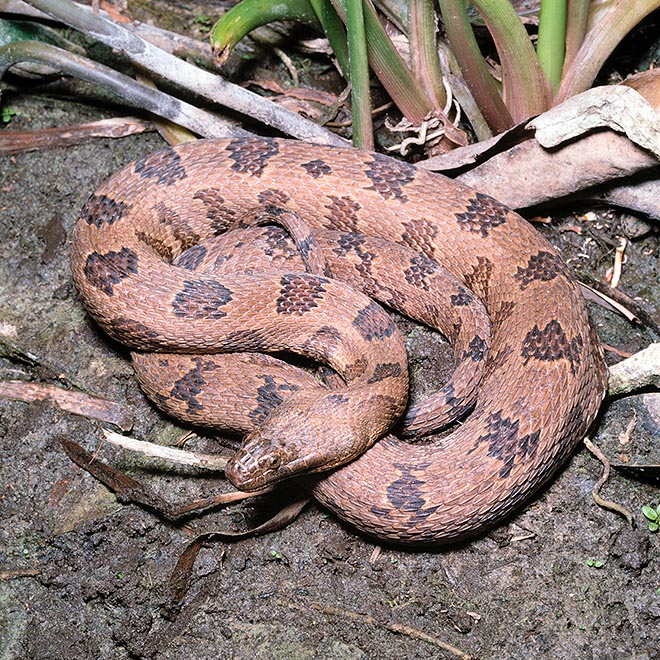 Not venomous but biting, it lives in the same places as the harmful Agkistrodon piscivorus © Giuseppe Mazza

The labial scales, especially the upper ones, are big and thick, and contrast with those of the neck, rather small, giving almost the impression, when looking the head from the side, that this serpent is equipped with evident and thick “big lips”.

As the name implies, the background colour is dark, usually a more or less strong brown or chestnut, on which there can be more or less evident darker patterns, of a squared or rectangular shape, lined along the dorsal line, clearly separated each other. Also on the sides, usually are present two series of spots, smaller and equally separated from each other.

The ventral part is yellow or pale brown, dotted with darker spots.

The scales covering the body are strongly keeled and placed, at half of the length of the body, in 25-33 oblique rows, and the sub-caudal ones are placed in two rows (whilst in the Agkistrodon they are unique, other distinctive character).

Contrary to many other aquatic species, the brown water moccasins, they quite rarely get away from the banks and do not cross vast dry spaces for moving from a pool of water to another, in other words, it’s a species which is closely liked to the liquid habitat. In favourable environments, with thick vegetation, they can be present in great number and show unbelievable concentrations, so much to get some zones described as literally “plagued” and often dreaded. The usual preys are formed by fishes, mainly catfishes, which they chase and capture with great agility or which they wait for in ambush, batrachians and their tadpoles, amphibians, at times aquatic birds and other reptilians, but they seek also small mammals.

Mainly of diurnal habits, during the warm months they go hunting at night or in the twilight hours, but they spend many hours per day basking on a branch, and it is not unusual to see many specimens sharing the same resting location.

The period of the mating stands in spring, between March and June, and the births occur in summer or by early autumn. They are ovoviviparous reptilians, the females “deliver” up to 50 or 60 alive and active young, long from 20 to 30 cm: the conception does not take place at the moment of the insemination, but when the female “ovulates”, and the sperm can be stored into the cloaca for months, or even for years. Before conceiving, the female may accumulate up to the 50% of her weight more of fat, as energy supply, thus assuming remarkable dimensions in view of the delivery.