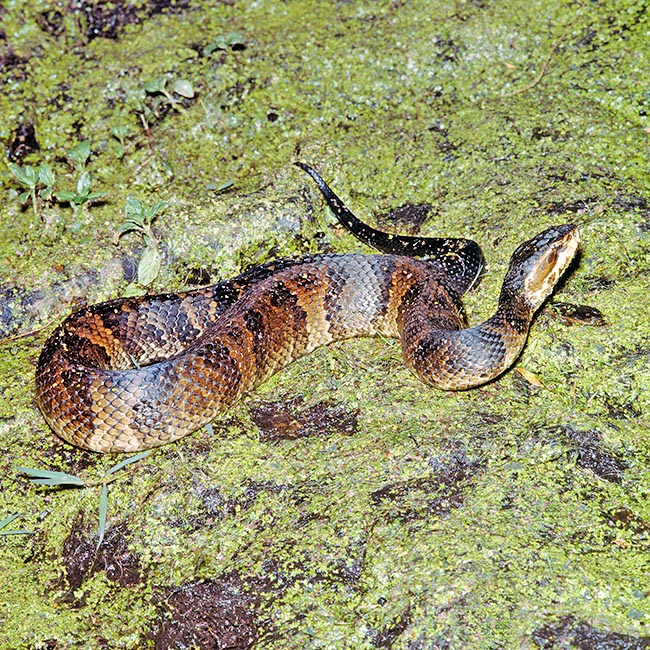 At home in Florida, Agkistrodon piscivorus conanti may exceed 1,50 m with 4 kg of weight © Giuseppe Mazza

The genus Agkistrodon includes viperids (once ascribed to the crotalids), commonly called moccasins, afferent to the subfamily of the crotalines (Crotalinae).

The etymology appears to come from the language of the Algonquians, the Algonquian, and the word designated a type of simple and comfortable footwear obtained with only one piece of morbid skin.

Modified in “moccasin”, the term has reached us, Europeans, and describes a sort of sport wear, usually without laces.

It is likely that the Native Americans did really utilize the skin of some fairly common crotalids (water moccasins and copperheads) for making their footwear and this should explain the common name of these species of venomous serpents, which have been therefore, treated like …shoes.

In general, the the snakes of the genus Agkistrodon, the aquatic ones as well as the terrestrial ones, do have several characteristics differentiating them from the true rattlesnakes, the most evident one being the absence of the organ called rattle.

However, also these crotalines have the habit, when alarmed or annoyed, to vibrate quickly the tip of the tail, but, being devoid of the … clappers, the only way they have to render audible such warning is to bang the tail against the vegetation, obtaining, in such a way, some result, even if less folkloric and less convincing than the classical rat-rat of the rattlesnakes.

For the rest, they are also “dimple vipers”, equipped, therefore, with thermo-receptive organs, useful for localizing warm-blooded preys.

The Florida cottonmouth (Agkistrodon piscivorus conanti), here shown, is a big serpent, long, as an average, between the 70 and the 130 cm (with a record of 190 cm), with a sturdy body, covered by slightly keeled scales and with a weight which may reach the 4 kilos and a half.

The head, seen from the side, differs from that of many true rattlesnakes, for the slightly shorter mouthline as well as for the extremity of the snout, “sloping” down, so much that the apex of the nose looks more advanced in respect to the mouth and pointed. It can be distinguished from the other two subspecies due to the colouring of the head, usually having a horizontal dark stria on the cheek, over and underlined by two pale stripes, behind the eye.

The livery in the juveniles and the sub adults shows an evident pattern with transversal bands, standing out against the coloured background of the body; this may be yellowish, brown, grey or reddish, but the adult individuals tend to darken and the patterns to fade away and even to disappear in the old specimens, who are, often, almost uniformly black. 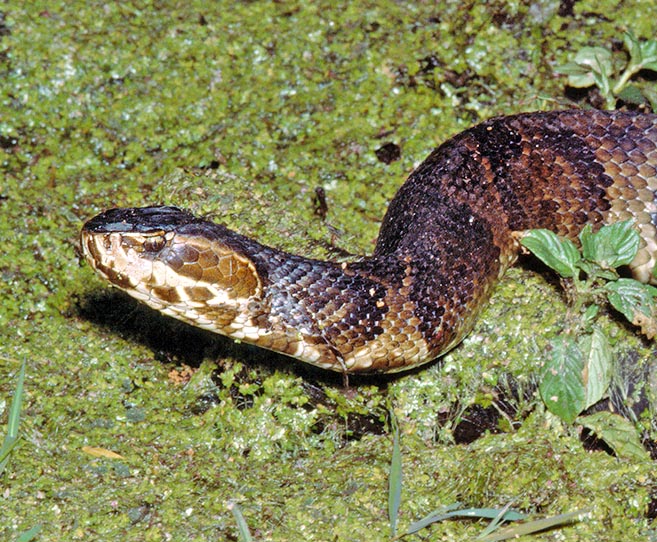 It is a serpent with semi-aquatic habits, who is comfortable in the water, where it swims gracefully and quickly, and also on the ground, but is difficult found far away from the liquid element.

It particularly loves the swampy zones, the water ponds, the banks of the water streams, lakes and pools and is a typical inhabitant of the Everglades. It nourishes of fishes (as the scientific name implies), but also of batrachians, mammals and birds, aquatic and not.

Ovoviviparous, the female delivers from 2 to 15 young, who measure, upon their birth, from 15 to 18 cm, and usually “gives birth” every other year.

Of combative temperament, it usually defies an intruder, by vibrating the tail and causing a sort of buzz against the vegetation, whilst the head is turned upwards, with the mouth wide open, n order to show the white mucosa, as a warning.

If this trick does not work, it does not hesitate to bite and its venom, cytotoxic and haemorrhaging, can reveal fatal for the man, even if it does not seem that the cases of death are numerous.

Many believe that it waits for the unwary fisherman, on a branch overhanging on the water, and then plops into the boat and bites the ill-fated; but this is a legend and possible instances of moccasins …rained down from a tree into a boat …are, probably, some fortuitous events, even if unpleasant.

It may be not easy to distinguish a moccasin from one of the various water snakes (Nerodia), harmless and more common to meet, and therefore caution is to be made when trying to catch an aquatic snake in areas where are present the various species of cottonmouths.

An empirical difference, which may be of help, is the behaviour when a person approaches: the harmless water snakes (genus Nerodia) jump quickly and instantly into the water, with a loud splash, whilst the moccasins tend to remain where they are, showing the intimidating demonstrations I was talking of, or to get away more slowly and with more dignity, as is convenient to an animal who knows to be holding a fatal weapon.

A difference that settles any doubt, apart the characteristics of the head, the dimples, the vertical pupil eye, typical of the crotalids, is the disposition of the ventral caudal scales, placed in two lines in the genus Nerodia and in a single one in the genus Agkistrodon, but in order to appreciate such differences it is necessary to have in hand their owner, so …

The home range is not much vast, but it includes not only Florida, but also the extreme South of Georgia and the islands off Florida coast. The eastern subspecies (Agkistrodon piscivorus piscivorus) has size and livery similar to the previous one, but, often, with more evident patterns, even if the adults tend to have a uniform and often black tint. Its range partially overlaps that of the Florida subspecies, but includes also Alabama, Georgia and Virginia.

The western subspecies (Agkistrodon piscivorus leucostoma) is the smallest subspecies (as an average, 70-100 cm, with a record of 157 cm), and is also the darkest (also in the young individuals). It is found in the humid zones and close to the water in the south-western part of the USA.