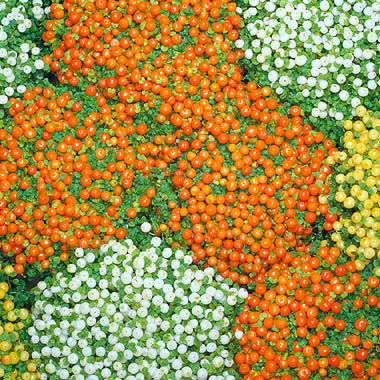 It usually grows in shady locations, at medium and high altitude, characterized by a constant and cool climate with much humidity and rains regularly distributed during the whole year.

The name of the genus comes from the Greek “nérteros” = inferior, lower, referring its the trailing on the ground condition; the Latin name of the species “granadensis” = of Granada, refers to the place of provenience of the plant when first described, the New Granada, the Spanish viceroyalty which, between 1717 and 1819, was comprising Ecuador, Guyana, Panama, Trinidad and Tobago and part of present Venezuela.

Perennial herb, evergreen, trailing, with short branches, rooting at the nodes, and which usually is not taller than 10 cm; the leaves are small, orbicular, long about 5 mm, of an intense green colour. The flowers are terminal, small, with four greenish white petals, which are followed by round bright orange red berries, of about 5 mm of diameter, containing one seed only, persisting many months. It reproduces by seed and by division in spring.

Plant utilized, outside from its origin areas, for indoor decoration, often as annual, due to the difficulty which is met for keeping it for long time. The plant, in fact, is very particular in the environmental humidity, which must be high, and the temperature, which should be almost constant and cool all the year round, between +10 and +20°C. The substratum must be very draining and rather sandy and must be kept constantly humid, but in winter, when it is to be left drying well up between the waterings, or to cease them completely, thus granting the plant a short period of rest.