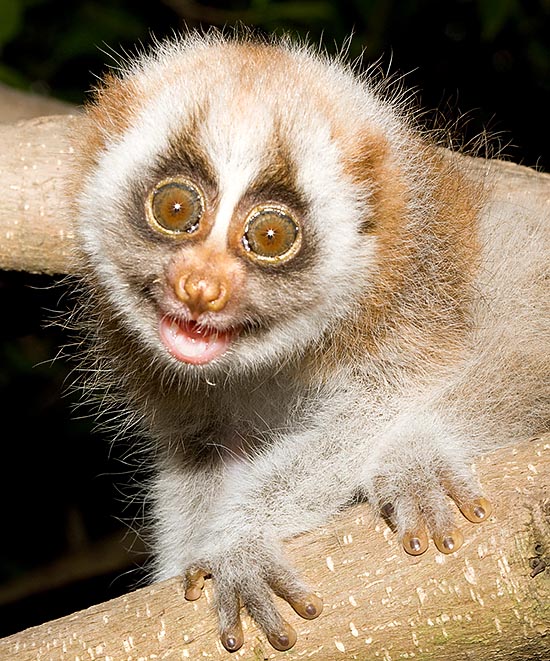 The Sunda slow loris (Nycticebus coucang Boddaert, 1785) belongs to the family Lorisidae. It is a primate of the suborder Strepsirrhini to which, besides the loris, belong the pottos and numerous species of primates of central Africa and of south-eastern Asia. The genus Nycticebus includes presently four species: Nycticebus bengalensis, Nycticebus coucang, Nycticebus javanicus and Nycticebus pygmaeus.

To the first belong the angwantibos (genus Arctocebus), the Potto (Perodicticus potto) and the False potto (Pseudopotto martini), whilst the second, besides the aforementioned species of the genus Nycticebus, includes also the Grey slender loris (Loris lydekkerianus) and the Red slender loris (Loris tardigradus).

The name of the genus Nycticebus comes from the Greek and clearly reveals the nocturnal habits of the species belonging to such genus (“nyktos”, genitive form of “nyx” = night, and “kêbos” = monkey), whilst the name of the species, coucang, comes from “kukang”, under which is called the slow loris of the Sunda by the local Indonesian populations.

The species, as its common name suggests, lives in the geographic area of the Sunda Islands. Is present in Indonesia (Sumatra, the islands of Batam and Galang belonging to the Riau Archipelago, and the islands of Pulau Tebingtinggi and Bunguran, belonging to the Natuna archipelago). Its range, however, extends to include also Malaysia (it is found in the whole peninsula and on the island of Tioman), Thailand, Burma, Indochina and Singapore.

Presently, the Sunda slow loris is included n the Red List of the IUCN where it is classified as “vulnerable” species, as it is estimated that within three generations (a period of about 21-24 years), it has been registered a decrease of more than the 30% of the overall population. It is presently subject of illegal trade as pet animal (“per trade”) in all south-eastern Asia and, recently, also in the Western World; moreover, exactly like many other species of monkeys, it is negatively influenced by the loss of habitat, despite being a better adaptable species to contexts modified by the man than other primates living in the same region. The fragmentation is progressively reducing, as a matter of fact, the degree of the forest canopy, hindering or at least reducing sensibly its dispersion, being a species moving mostly from tree to tree.

Another major threat, finally, is represented by the use done of it by the local medicine, whereby the fur should have healing properties and the flesh should be capable to cure epilepsy and asthma; the eyes, at last, are used in the preparation of love potions. 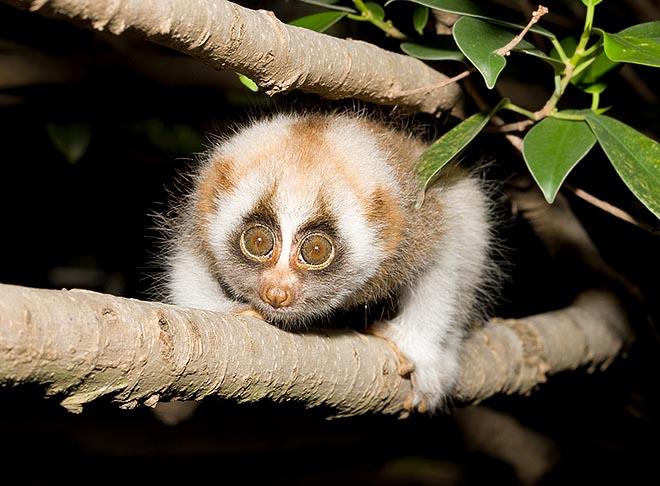 It is a night animal, of 27-38 cm and weight of 600-685 g, nourishing of lymph, gum, nectar, fruits, leaves and stems, but sporadically also of spiders, insects, small vertebrates (snakes) and bird eggs © Giuseppe Mazza

The diet of the species is greatly based on vegetal resources: lymph, gum, nectar, fruits, leaves and stems of the plants are the foods mostly consumed; occasionally, it eats also arthropods, such as spiders and insects, small invertebrates (snakes) and bird eggs. The nectar of a plant, in particular, the Eugeissona tristis, seems to be a key resource in its feeding.

Though Nycticebus coucang has very slow metabolism, its diet characterizes for a high energetic value; probably the explanation of this stands in the fact that a high energetic consumption is associated with a process of detoxification of some vegetal substances present in the plants it eats.

It is, moreover, a delicious kickshaw for numerous species, among which the Reticulated python (Broghammerus reticulatus), the Bornean orang-utan (Pongo pygmaeus) and the Changeable hawk-eagle (Nisaetus cirrhatus).

The adults weigh 600 to 685 g and are 27 to 38 cm long; they have short and thick hair, of brown-greyish colour with a darker stripe on the back, whilst the abdomen appears of pale colour. Between the eyes, big and surrounded by brown rings, they have a white band going from the front up to the snout, small and pointed. The presence of the big eyes is due to their mainly nocturnal habits. The tail, reduced to a stump, remains almost all hidden by the hair and, rightly, the thick fur and the very small tail contribute to give a stocky appearance to this funny animal. On the sides of the head they have two small round ears, also partially hidden by the hair, whilst the hands have a very reduced second finger, which, in the feet, is furnished of a robust nail used for the “grooming”. 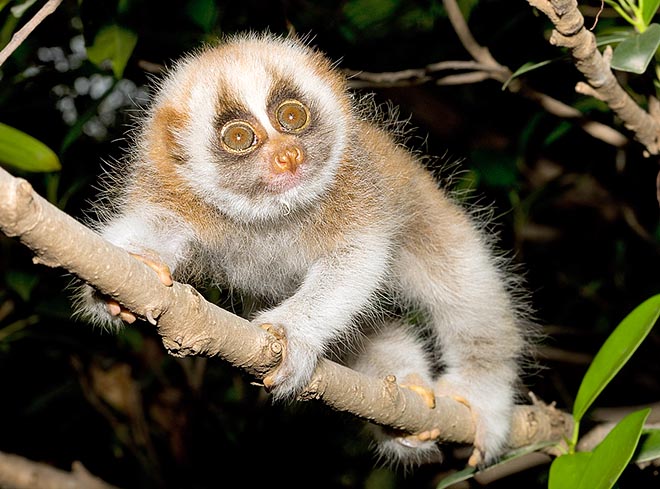 It moves extremely slowly, advancing only one limb at the time. Discourages predators with a very poisonous oil, also for men, that it smears on the hair and comes from special glands placed inside the elbows © Giuseppe Mazza

The sexual dimorphism is not accen- tuated: males and females do not significantly differ in the colouration of the hair, in the size and in the weight. They have a toothcomb used for scraping the gum they eat from the trees; less frequently this structure is also used for the “grooming”, behaviour observed in many other species of strepsirrhine monkeys.

The Sunda slow lorises are arbori- colous, nocturnal and mostly solitary: they get into activity by the sunset and spend most of their time alone. The daily hours are employed mainly for sleeping, activity they perform rolling up in hidden zones of branches, lianas or palm fronds. Unlike the Bengal slow lorises (Nycticebus bengalensis) they never take advantage of the holes in the trunks of the trees as cache for sleeping.

As the name itself says, they carry on a style of life dedicated to the slowness: they move with phlegm by shifting one limb at the time and holding the branch with the other three. Their locomotion is similar to a creeping, characterized by a somewhat confused gait with small and continuous changes of speed. At times it happens that the lorises let themselves dangling from the branches for a long time, remaining hung by means of one or both feet.

They have glands inside the elbows capable to produce poisonous oil, used as powerful defence weapon against the predators and as efficient means of intraspecific communication.
Through the toothcomb the toxin is distributed all over the hair in way that if, in case of danger, the animal rolls up leaving exposed to the predator’s attack only the poisoned fur. This oil is so much powerful to kill an adult man, if we do not act promptly. They rarely bite for defence.

The same strategy is used also for protecting the young: the females leak their fur, sprinkling it with the poisonous substance produced by the elbows in order to defend them from possible predators while the parents are looking for food. 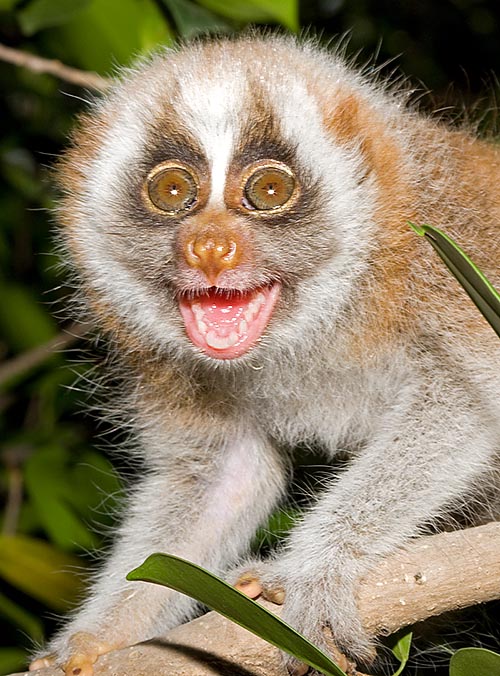 Menaced, it rolls up as when sleeps during the day between the branches, offering the predators only the poisoned fur. Unluckily this is not enough for the reticulated python, the raptors, the Bornean orang-utan, but especially does not hinder the pet trade © Giuseppe Mazza

In the slow lorises it’s the female to take the initiative: it keeps hanging from a branch in sight of the male, vocalizing for drawing attention and, in front of a little reluctant male, marking with its urine the surrounding space for urging it more. The mating at that point foresees that the male holds strongly the female and the branch at the same time, in order to have a very firm grip.

The gestation lasts about 188 days, after which is usually delivered one newborn only, even if have been observed cases of twinning. The female alone takes care of the progeny, whose weaning takes place between the 3 and the 6 months; the sexual maturity is reached between the 17 and the 24 months in the females and by the 20 months in the male.
The Sunda slow lorises reproduce once a year, even though the female is sexually receptive more times during the year.

In the popular beliefs, the slow loris is carrier of good news or of misfortune, depending on the geographic zone. In Java, for instance, they think that the slow lorises are carriers of diseases or death and that their always sad expression, due to the presence of the brown rings around the eyes, is due to their capacity of entering in contact with the restless souls of the dead. In Indonesia, the Sunda slow loris is also known as “malu-malu”, meaning “shy” in the native language, whilst in Thailand is called “ling lom”, that is, “wind monkey”.

The life duration is of around twenty years, but in captivity they may reach even the 24. The longevity record is rightly held by a specimen in captivity, which lived up to the age of 26 years!!! However, it is to be kept in mind that when in captivity the slow lorises suffer from high levels of stress, and this causes a greater aggressiveness and duration of life often drops to only 12-14 years.

The term “lori” was used the first time in 1765 by the naturalst Buffon as equivalent of the German name “loeris” which meant “clown”, due to the funny “little mask” they have around the eyes, even f the name used for describing the first slow loris was Tardigradus coucang, by the Dutch naturalist Boddaert in 1785. Only in 1812 Étienne Geoffroy Saint-Hilaire did nominate the genus Nycticebus, on the base of the nocturnal habits of its members.