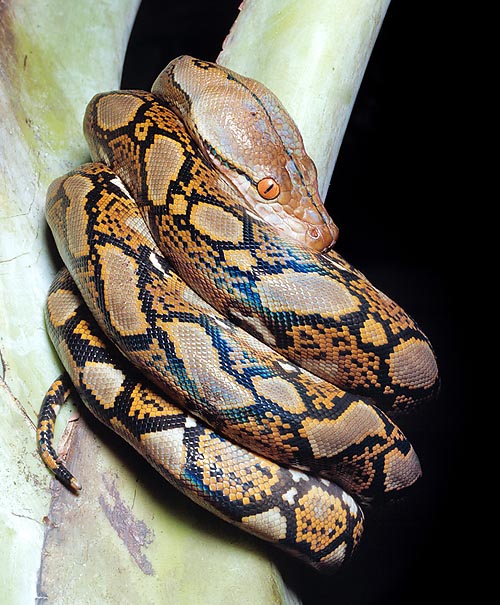 The Reticulated python is undoubtedly a VIP in the world of the serpents and, among the so many species of pythons, is one of the most known to the general public, for its size as well as, at times, for its grim reputation and, as it often happens to the prominent personalities, it stands, at times, at the centre of quarrels, gossips and conflicting news.

Moreover, quite recently, also the scientific world has started disturbing its privacy as it has decided, unilaterally and without asking him any advice, to change even its name, even if it has been good enough to leave at least untouched the …last name, and so, nowadays, instead of Python reticulatus, it looks like that we shall have to call this animal Broghammerus reticulatus (Schneider, 1801, family Boidae).

Sincerely, I preferred its previous name, but I must bow down to science.

The second scientific name, actually, describes so well its look, that to change it, should have been irreverent, and the livery of this great squamate really gives the impression that its body is …stuffed in an elegant camouflage netting, made of dark lines intersecting on a clearer background, which includes tints going from the yellow to the green-grey to the olive.

Furthermore, in some specimens are evident pearl grey coloured triangles with opposing and alternate apices which seem to delimit some yellowish zigzagging lines.

The head is big and elongated, usually of clear colour, and often shows a dark central longitudinal line, which goes dorsally from the apex of the snout to the nuchal zone, and another thin dark line starting from the rear of the eye and runs backwards horizontally.

The orange or yellow eye has a vertical pupil which reveals its crepuscular and nocturnal habits and quite evident are the thermo-receptive labial dimples, able to let him locating the prey also in the darkness, thanks to the heat emitted.

The mouth is ample and has long and sharp teeth, slightly bent backwards, and suitable for grasping and holding the prey thus allowing it to wrap around the same its powerful coils and then killing it by constriction (please see text Python curtus).

The geographic diffusion is vast and includes the Asian South-East, Singapore, Thailand, Indonesia, Philippines, Laos, Viet Nam, Malaysia, Java, Borneo, Sumatra and many lesser islands and its typical habitat is the pluvial forest, with presence of water streams or swampy zones, but it can be encountered also in plantations and, sometimes, in parks and gardens.

This reptilian holds the official record of length, with a 10,20 metres of ascertained length (Celebes), which, probably, was corresponding to a weight of at least 150 kg, seen that a specimen in captivity, whose name was Colossus, in an American zoological garden, was “only” 8,68 metres long and weighed 145 kg. It should be specified, however, that specimens in captivity may easily “put on weight” thus weighing more than those in the wild.

The reticulated python, therefore, is longer also than the Green anaconda (Eunectes murinus), whose longest ever measured specimen did reach the 8 metres and 40 cm, however, at least officially, the green anaconda is still the heaviest serpent, with a proved maximum weight of 500 pounds (230 kg) and a circumference of 110 cm.

To complicate things news has come, about which I could not find either confirmation or denial, of the seizing and the detention in an Indonesian zoo, of a more than 14 metres long python to which a weight of 900 pounds was attributed! 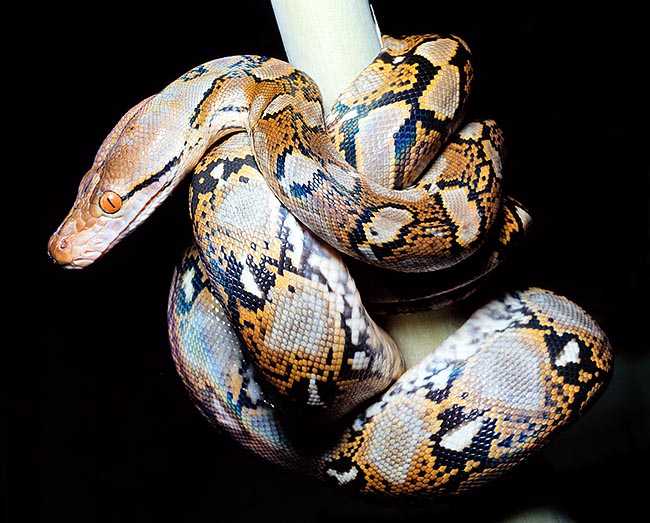 A video may be seen on the site of the MSNBC television: personally, I do not dare to make any comment, even if the measures advised seem to me unbelievable, it is certain that, if this should be true, we would be facing the most exorbitant serpent ever seen, and I would be asking myself how the hell did he even move on the ground and if, by any chance, it should not be matter of a form of pathology related to an abnormous growth, a bit like it happens for the human hypophysial gigantism or the acromegaly, pathology that has been called n question also for explaining the famous case of the beast of Gévaudan, that terrified the French zone having the same name, during the eighteenth century.

Coming back to normal pythons, the reticulated one is therefore long but fairly slender, and so it moves on the ground more gracefully and more quickly than the anaconda, mainly aquatic animal, and, however, also the reticulated loves the water, element where it is as at ease as on the ground, indeed, usually its habitat includes the presence of water streams or surfaces.

The average length of an adult abuts between the 3,5 and the 6 metres and only rather old animals reach the maximum sizes. In densely inhabited zones, then, being its meat sought for, especially when young, many specimens simply do not reach the retirement age and this significantly lowers the average.

On the other hand, as per compensation, our serpent is one of the few in the world, along with the African rock python (Python sebae) and the Green anaconda (Eunectes murinus), capable to predate and eat the human being. Also here, legends and rumours attribute it, perhaps, an excessive number of human meals, but there are documented instances and the cases of killing not followed by ingestion are even more numerous.

There have been many disputes about the possibility or not, for a great boid, of swallowing a human, as many say that the shoulders of a man would represent an insurmountable barrier. Without wanting to mythicize the possibilities of a serpent, however, I think that the problem (for the reptilian) is not so much the presence of the shoulders, but the dimensions, and in fact, usually, the reported cases of ingestion did concern children of kids, or women, usually of fairly thin constitution.

Different is the situation for what the killing capacity is concerned. Having said that also a relatively small python is capable to inflict severe wounds (which, often, get infected), the bite water hammer itself, done by a big specimen, can cause fractures or injuries to internal organs (for instance, the breakage of the spleen, with fatal haemorrhage). If the blow reaches the head, then, it is probable that the victim at least loses consciousness, after which the reptilian can kill it by constriction, eve if, later on, will not eat it.

To deteriorate the situation there are two facts: this python fascinates the lovers and it is quite often kept in captivity, furthermore, it has a terrible temper, being, unlike the boa constrictor, just as an example, irritable, nervous and mordacious, so the accidents are relatively frequent. 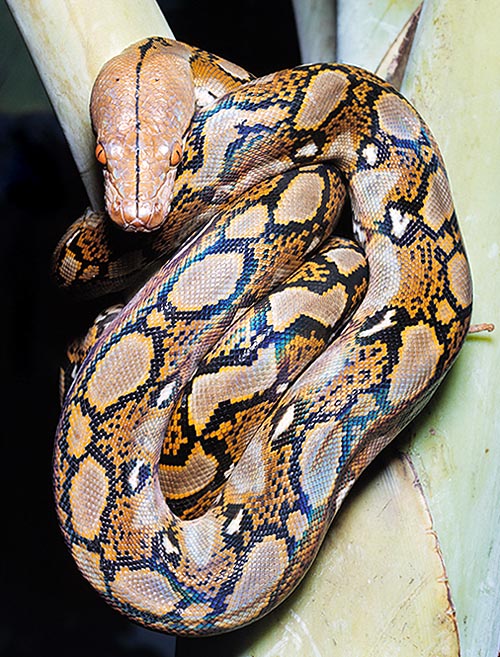 One of the last instances reported seems to have taken place this year in Japan, where it appears that a man has been killed by one of these serpents kept in captivity, but other cases have occurred also in USA.

In Port Orange, a collector was attacked by his own python measuring 12 and half feet (375 cm about) while trying to give him a medicine: the reptilian caught him by the arm and then killed the man by constriction.

Another fatal case happened in Indiana, by a 420 cm python, and another case saw as victim a lady, in Virginia Beach, and as killer, a 13 feet (390 cm), “domestic” reticulated python.

From above we can understand how even a medium sized python is perfectly capable to kill an adult human being and probably some attacks which ended with the ingestion of the victim might have started as attacks due to a “disturbance” unwillingly caused to the serpent by an intruder, and then, seen the modest dimensions of the victim, this last might have been used as food.

For what concerns the animals kept by collectors, the predictability and gentleness of character of the Boa constrictor or of the Royal python (Python regius) often mislead, leading somebody to think that a reticulates gets equally well used.

Actually, as we have seen, the temper is completely different, and furthermore an additional danger (in addition to the excessive confidence) may originate from another fact: it is what is called “feeding response”, or automatic response to the food.

Even if we think to the serpents as little intelligent animals, they also develop a sort of imprinting and have a capacity of association. The opening of the “cage” for nourishing them is automatically associated to the idea of food, especially when the contacts with the “master” are limited to this moment therefore a bite given in that moment (opening of the cage and/or entrance in the same) might reveal more dangerous of a simple defensive “hit-and-drop” bite.

In other words, it is more likely the serpent bytes and holds the seize and from this stage to wrap its coils around the arm (or worse), the step is not so long, and this perhaps helps in explaining some accidents which have as result not a trip to the local hospital but to the mortuary.

The customary preys of the Broghammerus reticulatus are, however, usually others: big individuals may eat fairly big animals, such as up to 60 kilos pigs, young babiroussas and also a bear, even if weighing only 25 kg, was found in the digestive system of a python.

Cases of predation of small crocodiles have been documented, besides those of primates, dogs, domestic animals, poultry, big rodents and birds, whilst the smallest specimens content themselves with rats and fairly modest sizes animals, but these reptilians are much adaptable and take advantage, profitably, of all what the case sends in range to them. The hunting technique is usually the ambush: relying on the camouflage and on the immobility, the animal waits for the passage in range of a prey, then, with a dashy elongation of the head, pushed by the muscled body, catches it and then wraps in the coils.

For what the reproduction is concerned, unlike boas, the reticulated python is an oviparous animal. The female lays from 20 to 100 big eggs, which will take, as an average, three months for hatching.

Even if, perhaps, as longevous as the Boa constrictor, which can reach the age of 40 years, probably the reticulated may reach and exceed the thirty years, and goes on in growing until the demise, therefore the sizes depend, besides the abundance of the feeding sources, essentially on the age.