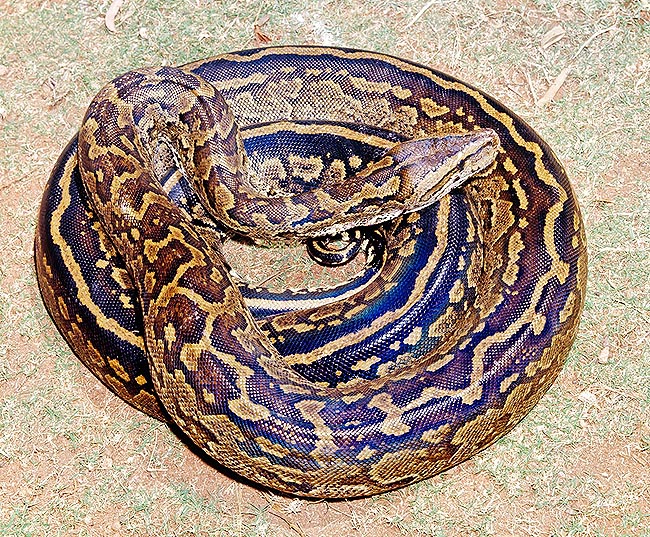 The Python sebae doesn’t crush the preys, but kills them by constriction, hindering them to breathe © G. Mazza

Humans have never been indifferent towards the serpents: they have admired or detested them, have proved form them fear or respect, but they did never ignore them or consider them as simple presences of the natural world around them.

The fact of moving without the need of appendices or legs, almost skimming over the ground, silently; the fact of moving without any effort on the dry land as well as in the water, or on plants and bushes; the skin apparently cold, the possibility of appearing almost from the nothing or disappearing into the narrowest cracks like ghosts; a skin which, if observed superficially, may seem viscid; the absence of eyelids, characteristic giving their eyes a fixity which seems malevolent and, above all, the fact that some of them have the weapon of the venom, all above has contributed to confine them in a legendary dimension.

However, it is mainly in the Christian religion that these reptilians have received a position among the “wicked”, whilst in many other beliefs or civilizations, the place they have occupied is much less negative or is even positive. So, for many Asian civilizations, the cobra (Naja naja) is a sacred animal, because it protected the Buddha during the dog-days, with its neck enlarged to form a sort of a parasol; for the Central American civilizations, the serpent Quetzacoatl, covered by feathers like a bird, was a divinity and for the old Greeks and Romans, the snake was symbol of wisdom and of knowledge and also simulacrum of the art of the medicine, so much that the well known Zamenis longissimus has the picturesque and evocative name of Aesculapian Snake.

In Africa, cradle of mankind, the legends concerning the serpents are thousands and an example is the white python of Funduzi, a solitary lake lost between the hills, close to my house, sacred for the Venda populations, which, every year, dedicate it the Domba, the dance of the python.

The pythons are constricting serpents, which kill their prey not by crushing, as some believe, but by constriction, which is a quite different thing. The prey is seized with a lightning movement which projects ahead the wide open mouth of the predator: the teeth, bound backward like hooks, anchor into the victim who then is wrapped in a moment by the spires of the powerful body of the reptilian. The predator sees to surround, with a series of spires, the thorax, probably facilitated also by the increase of the cardiac pulsations due to the fear and the stress. By gradually increasing the pressure, which is very strong but id does very unlikely fracture bones, the reptilian profits of the moment of the expiration for increasing the grasp and due to this the following inspiration is hindered and the victim dies, finally, from asphyxia and heart failure. 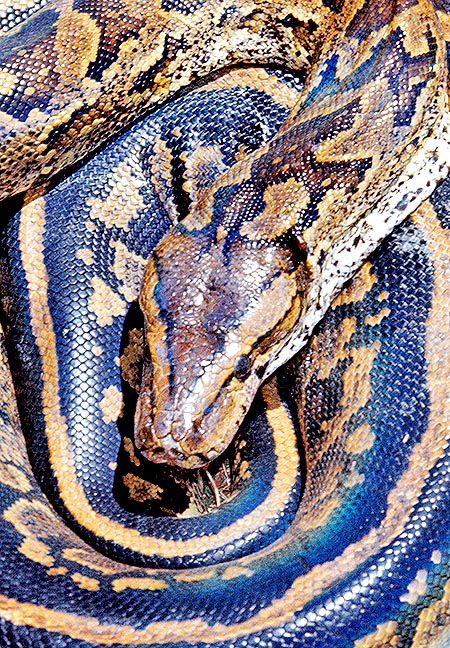 The Python sebae is the greatest African serpent © Giuseppe Mazza

Not all constrictors are huge serpents potentially in condition to kill a man, and not only pythons and boas hunt in this manner: there are many species, some of them even small, which utilize this system, for instance the African Common brown water snake (Lycodonomorphus rufulus), which kills the batrachians it eats by constriction, after having seized them with its small, curved backward, sharp teeth, which have given it the scientific name “teeth similar to those of the wolf” (Lycodonomorphus).

If we exclude Madagascar, island having its own fauna and which reminds Asia, few are the African boids: two species of rather small size (Python regius and Python Anchietae), and a big one, the African Rock python (Python sebae Gmelin, 1788), which has two subspecies.

The first is the Python sebae sebae, common in the African continent north of an imaginary line which, going from West to East, follows initially the boundary Angola-Namibia, including also the Caprivi Strip, then the boundary Zambia-Zimbabwe (Zambesi Valley), for then going ahead to reach the Indian Ocean along the Zambesi river.

The second, the southern Natal rock python (Python sebae natalensis) is that which populates the areas south of such border (Zimbabwe, Namibia, Botwswana, South Africa, southern Mozambique). However, after my own personal observations, the pythons seen and studied north and south of the said line of demarcation did not differ much.

The differences in the background colours have seemed to me to be related more to different environments and also the dimensions, which are usually indicated as bigger for the first subspecies, look to me to be determined more by factors like the density of the human population, etc. In South Africa, for instance, it is quite rare to see pythons longer than 4,5 metres (subspecies natalensis), but I think that this is due more to a greater anthropization: in other words, a python living close to a farm and which predates on domestic animals, in spite of the legal protection it enjoys, has minor chances to become aged, without forgetting that crashes with cars along the roads are frequent, especially by night and in fact I have found many individuals killed by lorries and cars. On the other hand, in remote northern areas, I have had the opportunity to see pythons of enormous dimensions, not smaller than those I have seen in Tanzania, Central Africa and elsewhere, north of the famous demarcation line.

The Rock python, called also African rock python, is a big serpent and it is not strange the fact that it has such importance in the mythology of the peoples which live in the bush together with it. The Zulus called it “Inhlwati” (read: Insciuaati), or “umonya”. Also among these populations there are legends narrating of great flying serpents and a tracker of mine stated that the word “u.monya” comes from “u.moya” (air, wind, but also, soul or spirit). It is the most imposing and heavy African serpent, with an average length of 4 metres, but it may even reach the 6 metres and more. In our zone, we have seen specimens of 5 and more metres, but the track of one of them, on the main runway leads me to think about an even greater size.

The trace I found was rectilinear, as a python which moves slowly, as is the case for the big viperids (Bitis arietans and Bitis gabonica ), proceeds with contractions of the ventral muscles, in a straight line, like a maggot, but its width was impressing. The first time we saw that trace, I thought that the reptilian had just swallowed a big prey, but the next times (we never saw the animal and even were we unable to follow the trace, as the same vanished on the rocks), the width was always the same: if so, comparing the same with other traces and specimens, this had to exceed the 6 metres. 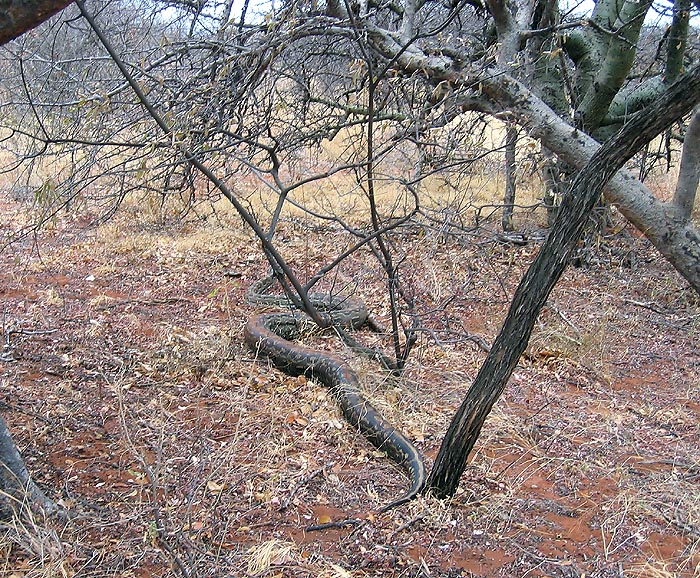 The livery of the rock python is very beautiful, with a background tint which may vary from the dark brown to the rust-red, on which stands out a complicated drawing formed by spots which render the animal showy when in open spaces, but which camouflage it perfectly when between the bushes of the high grass. On the dorsal part of the head there is a V, or arrow, shaped dot.

It is a predator which love the night hours, and which has a vertical and elliptic pupil, but it may be encountered also in the day hours, especially close to the waters, element where it remains willingly immersed even for prolonged periods. It prefers hunting utilizing the technique of the ambush and, when the prey passes by, it dashes forward, mouth wide open, seizes the prey and then wraps the spire around it, killing it by constriction as previously said. Usual preys are small or medium-sized mammals, from the Greater cane rat (Thryonomys swinderianus) up to antelopes of the size of the impala and the bushbuck), monkeys, baboon included, reptilians, among which monitor lizards and crocodiles, birds, batrachians and fishes. In rare but ascertained cases, it may predate the human being, mainly children, boys or women, having dimensions similar to those of the customary preys.

The python may live quite long and the female reaches the maturity and is capable to beget only when about 8 years old. It is an oviparous reptilian and the female lays from 25 to 100 eggs, which measure an average of 10 cm.

The eggs are laid in a hidden place and sheltered from the bad weather, the cold of the night and the excessive heat of the direct rays of the sun. Such place may be a termite mound, an aardvark den, the cavity of a tree or even one of the great holes that often the baobabs have in their trunk. The female cares the incubation by wrapping around them, till when they will hatch, usually from 60 to 90 days after the deposition.

During all this time, the female will leave the eggs alone only for drinking or for regulating its own temperature by means of the “basking”, absorbing heat from the rays of the sun or from a warm rock. The newborn are about 50 to cm as an average, with an already remarkable diameter and quite soon are able to provide for them, even if, initially, the preys will be limited to small batrachians, tadpoles and even insects.