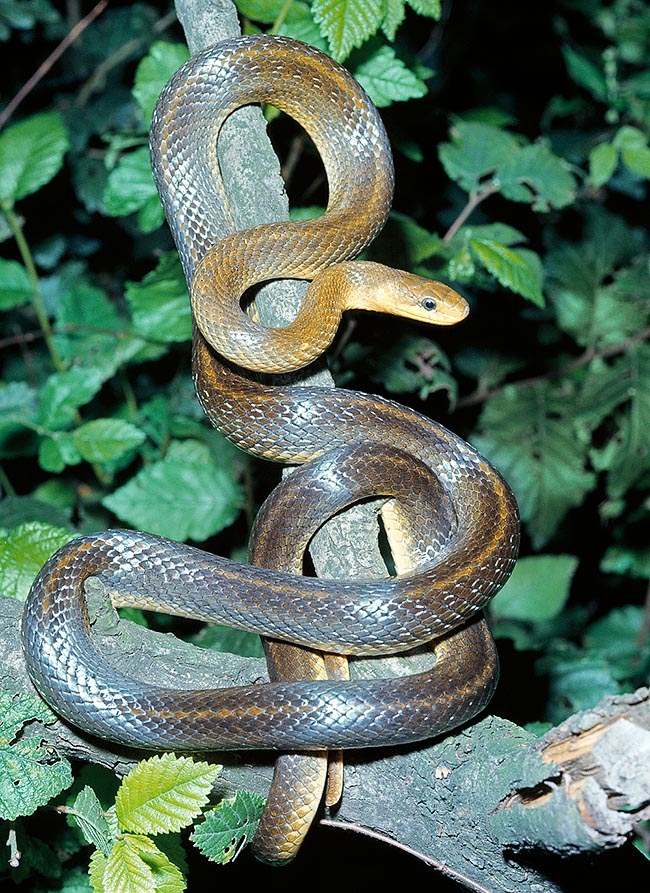 The Aesculapian Snake (Zamenis longissimus) is one of the biggest and elegant snakes present in Europe. It reaches the 130-180 cm in length and is perfectly at ease on the soil or among the branches of the trees © Giuseppe Mazza

The Aesculapian Snake  (Zamenis longissimus Laurenti, 1768) is one of the biggest and most beautiful snakes present on the European soil.

The name of the genus Zamenis comes from the Greek adjective “ζαμενής” (zamenés) = very strong, violent that comes from the combination of the prefix “ζα-” (za-) that reinforces the significance of the word to which is united, and of the substantive “μένος” (ménos) = strength, on rush, violence, whilst longissimus refers in Latin to the substantial size.

The vulgar name of Aesculapian Snake is instead due to the fact that the old Romans carried baskets full of these snakes in the battles or they made a cult use, seen that it was the snake sacred to Aesculapius, god of the medicine and of healing. This undoubtedly favoured the widening of the range of the species.

And also in the modern times is frequent the iconography of this reptile, seen that it appears in the logo of the pharmacies or in that of the order of the physicians: it is the famous snake clung to the stick.

Zamenis longissimus is a monotypic species, present in central-southern Europe. We find it in the north of Spain, in central-southern France and in some sites of Germany, Switzerland, central-northern Italy, Austria, Czech Republic, Slovakia, southern Poland and Balkans up to Greece.

Furthermore, it is possible to find it in the south of Ukraine, in south-western Russia, in south-eastern Turkey, in the western part of the Caucasus and in north-western Iran.

It is a snake typical to temperate forest habitats at medium-low altitudes, with moderate humidity and heat. It loves therefore ample mesophyllic deciduous forests with rich bushy vegetation and open clearings, areas adjacent to water courses, heaps of stones and of various timber covered by creepers, but also ruins and margins of cultivated zones rich of fences and of ecotonal environments, that is of transition between two different ecosystems, like, for instance, the limit of a wood. 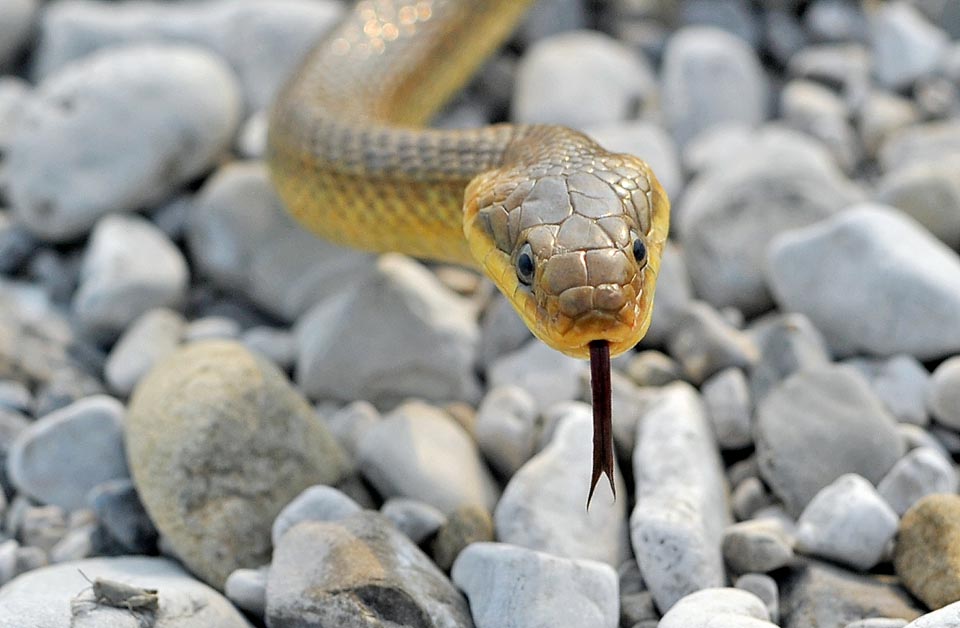 Here it moves calmly along the stones on a riverbed collecting in the air, with its moving tongue, the smell of possible preys. It has surely seen the grasshopper on the left, but goes straight, together with lizards, the insects are now a pale memory of the juvenile diet: the adults mainly nourish of small mammals, eggs and nestlings © Colombo

In the northernmost part of its distribution area is limited to warmer and facing south zones.

The Aesculapian Snake is a terrestrial-climber, that moves calm and elegant, active in the day and at dusk. In the warmest periods it can be active also during the night or during the rains. It is often seen thermoregulating in suitable sites but also on the tarmac, where, unfortunately, the risk of mortality is high. In the warmest moments it retires inside shelters.

The hibernation may last 5-6 months (depending on the location and on climate conditions) whilst its period of activity is included between April-May and October. 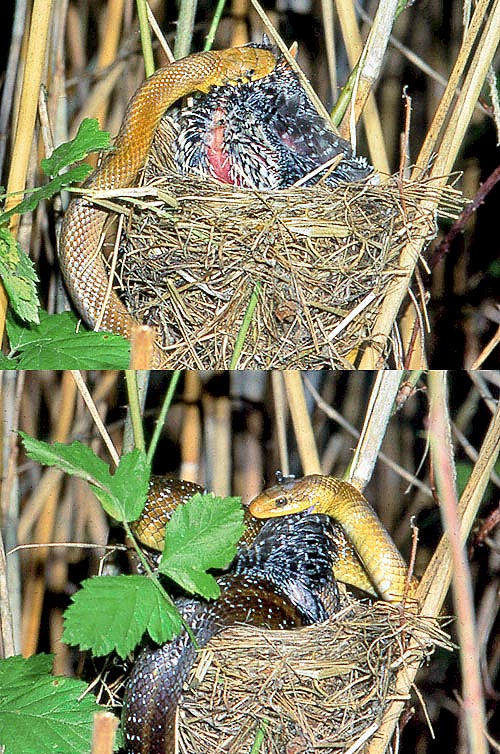 Here is busy with a very rich meal. It has found and is gulping a young cuckoo among the branches. The Aesculapian Snake is a harmless snake and kills the preys by constriction © Museo Civico di Lentate sul Seveso

The Aesculapian Snake is a snake of rather large size, 130 to 180 cm, with mighty but slender body.

The head is tapered, slightly distinct from the body: the eyes are moderately big, with rounded pupil and yellowish or golden iris. The lower parts and the labial zones are yellowish, the upper ones of uniform olive-slight brown colour, paler towards the head and the first zones of the body.

Furthermore, the body distinguishes for the dark post-ocular bands going from the back of the eye to the rear temples; behind these stands a pale semi-collar at times just hinted.

In some individuals is present also a dark sub-ocular band.

Along the body we can note some dorsal-lateral lines badly defined; furthermore the margins of the dorsal and lateral scales are pigmented clear giving in this way the effect of sparse and diffused white small points.

The females distinguish for the minor size, relatively shorter tail and absence of swellings at the base of the tail.

The young, besides differing for size, have a different livery: the top of the head is dark brown with a transversal band between the eyes; are present also two retro-ocular dark bands that do not join with the pair of retro-mandibular dark bands, two dark spots under the eyes, a pale semi-collar on the nape, a dark inverted V-shaped behind the same.

The rest of the juvenile body is clear with regular series of ample brownish spots which give a reticulating effect.

Its similar Zamenis lineatus, or Italian Aesculapian snake is practically the same: it only distinguishes for the size of the head, slightly more slender, for the red iris, for the dorsal-lateral striations, better defined and narrower, and for the white small points that is more concentrated close to above mentioned striations.

The Aesculapian Snake is a harmless, not poisonous, snake, that kills its preys by conscriction. It mainly nourishes of nestlings, eggs and small mammals; the young mainly of small lizards and invertebrates. 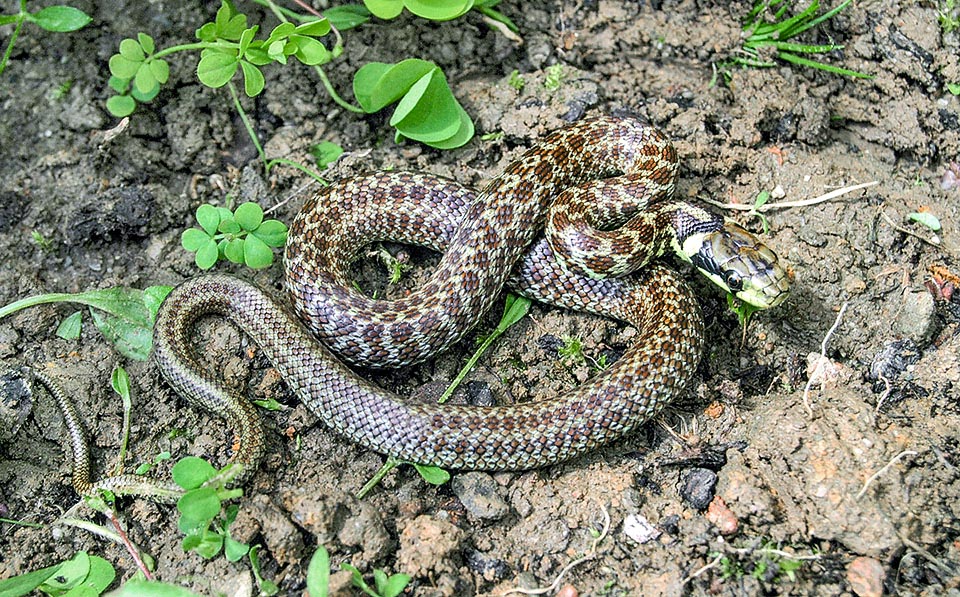 Females lay 2-15 eggs. The newborns, 25-35 cm long upon the birth, have an elegant mimetic livery quite different, with brownish small spots, with a reticular appearance © Daniel Jablonsk

The reproductive season begins in May: characteristic are the fights between males that cling to each other trying to push to the ground. Then the winner, selected the suitable female, spends some time with it and later begins a sort of dance. At the end of this ritual the male bites the female on the nape, immobilizing it, and proceeds to the fecundation.

By July the females lay in the rock fissures, among the rotting vegetation or under the fallen trunks, 2-15 whitish eggs of about 3-4 cm of diametre. The newborns, about 25-35 cm long, are born in September. During the first year they reach a length of about 40-45 cm but for the sexual maturity they will have to wait until the fourth year.

Zamenis longissimus was last modified: May 26th, 2019 by Giuseppe Mazza