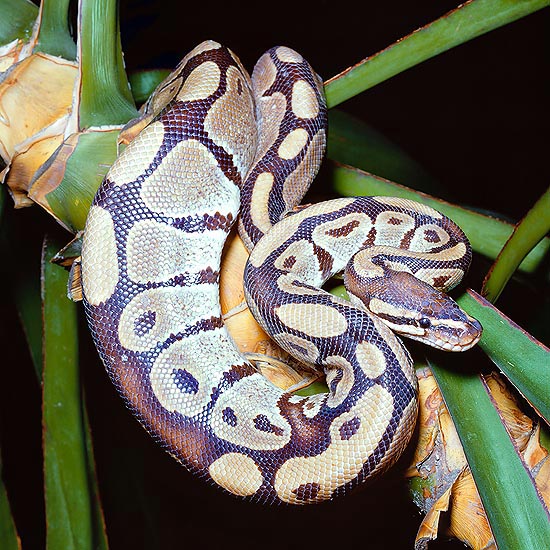 The Ball python or Royal python (Python regius Shaw, 1802, family Pythonidae), owes these common names to the habit of hiding the head between or under the spires when is frightened, so much to resemble to a coloured ball and to the elegance of its livery. In fact, the legend narrates that the Queen Cleopatra used to wear one of them, like a bracelet, thanks to its meek and absolutely not keen to bite temperament.

It is a serpent with a good diameter, but of modest size, 120 cm as an average (with a record, for a female, of 180-190 cm), diffused in central and western Africa, from Senegal through the belt of countries bordering the Gulf of Guinea: Mali, Sierra Leone, Ivory Coast, Niger and Nigeria, Cameroon, Central African Republic, up to the southern part of Sudan and the, southward, up to Uganda. The female tends to be bigger than the male, which rarely exceeds the metre and ten of length.

The head is triangular, or better, has the shape of an elongated trapeze, as the apex of the muzzle is wide and blunt, and the neck is slender, so that the head is well distinguishable from the body. The eye has a vertical elliptic pupil, which reveals its nocturnal or crepuscular habits, but the eyesight of this serpent seems to be rather scarce, probably more than that of other species of pythons. Observing the head better, we shell remark that, at the level of the eyes, it widens considerably backward, whilst ahead the muzzle is almost tubular, and how the upper part shows a great dark spot with anterior apex. On the contrary, laterally, the head is clear or cream, with a dark horizontal line passing through the eye. Before the eye, over the upper labial scales, we may see a series of “dimples” which are nothing else than thermo receptor organs, which inform the reptilian about the proximity of a warm-blooded prey.

The ball python, therefore, does not rely much on the sight for seeing a potential prey, but rather on its most sensitive organs which are, rightly, the thermo-receptor dimples and the Jacobson’s organ, a double organ, placed on the palate, to which the two points of the bifid tongue, which is rhythmically moving in and out from the mouth, through a special opening, carry the intercepted odorous particles. However, more than being an active and mobile hunter, the royal python is a patient scholar of the ambush, capable to keep motionless for days in a location of customary passage of the preys.

The background colour is dark brown, almost black, on which are evident wide dorsal and lateral cream, golden or pale brown dots, and the elegant livery is made even more attracting by the smooth scales which confer it a polished look, but, in the ventral part, there are more protruding scales which serve as track, for helping in the locomotion. The most utilized locomotion system, when it is not in a hurry due to fear or other reasons, is that as a “caterpillar” or as a “track”, which the Anglo-Saxon call, in fact, caterpillar-like: alternate movements of the ventral muscles, transmitted to the ventral scales, push it ahead without the typical winding, so that the rectilinear trace left looks very much similar to that of a big Puff adder (Bitis arietans ) or of a Gaboon viper (Bitis gabonica ). 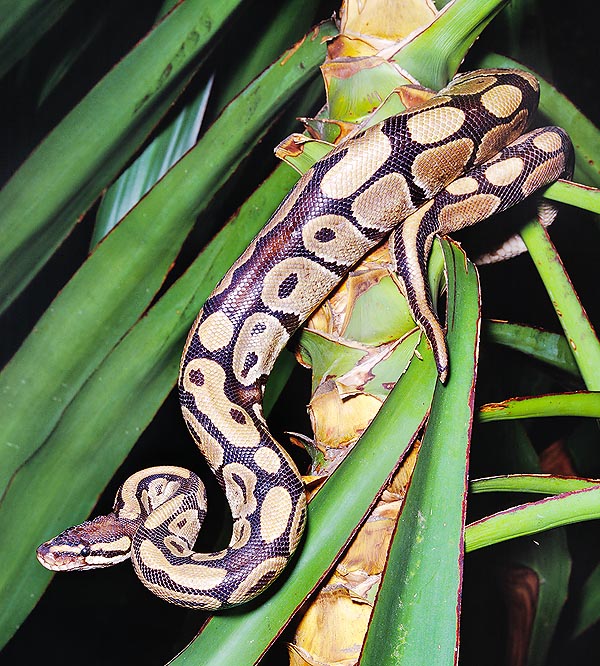 Rarely bites. If menaced, rounds on itself like a ball, the head protected by the spires © Giuseppe Mazza

Close to the opening of the cloaca, there are the vestiges of rudimental posterior limbs, lost during the long way on the road of the evolution, two sorts of short spurs which, presently, have the only function to help the male to hold the female during the mating.

The typical habitat is the grassy savannah, with scattered thickets of trees, and the transition zones between savannah and forest, but also zones of forest relatively not much thick, where it may hunt its usual preys, which are mostly mammals of modest size: bush rats, wild rabbits, reeds rats, shrew mice, etc.

The young specimens at times predate the nestlings, especially those of species which nidify on the ground, as it is a mainly terrestrial reptilian, and, at times, also batrachians.

Reptilian not furnished of a poison apparatus, it kills the preys by constriction (please refer to the text of the Python sebae), after having been lying in wait or, in some instances, after having approached it slowly and cautiously.

The teeth, like for other pythons, are hooked and turned back, suitable for grasping the prey with a sudden movement of the head, pushed by the robust body, and for holding it, after which, the reptilian wraps quickly its spires around the victim and the process of “constriction” starts; this does not have the aim of fracturing bones, but simply of hindering the expansion of the lungs and therefore the breathing.

Being an animal of meek temperament and not aggressive, its defensive technique consists, as we have seen, in winding like a ball, with the head well hidden between the spires, which are kept so much tightened that it may be easily moved and even to roll like a ball. However, at times, it may take a more menacing look, hissing loudly, but is little inclined in biting and adapts very well to the captivity, and in fact it is one of the most loved serpents by the lovers of terrariums. As it is a long living animal, it seems it lives 20 years as an average, in the wild, but there are cases of individuals which, in captivity, have lived 28 years (Zoological Garden of Oakland), and even 50 (Philadelphia Zoo).

The reproduction is oviparous. The female lays the big eggs in a modest quantity, from 4 to 10 as an average, with extremes of 2 or 14, of an almost velvety or, better, “suede” appearance. The eggs are laid in a depression or in other sheltered and hidden location and incubated by the female for almost two months, however, after the hatchling, the female abandons the progeny to its own destiny. The parental cares limit, therefore, to the “brooding”.

The newborn are from 25 to 45 cm and the post natal death rate is fairly high, as they represent an easy prey for many animals: birds, mongooses, monitor lizards, other serpents, etc.