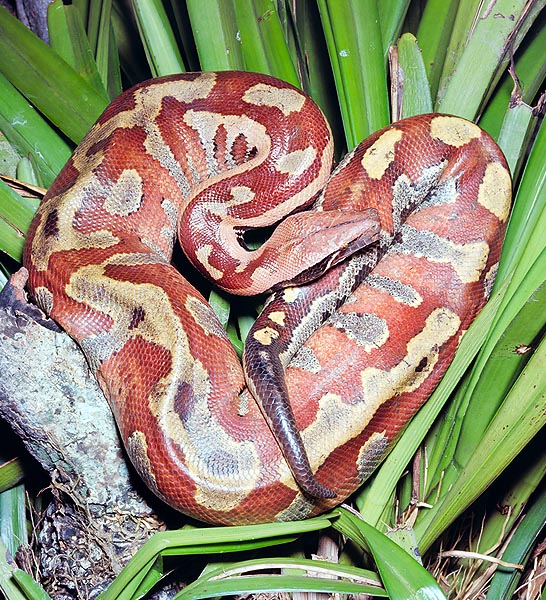 The Short python (Python curtus Schlegel, 1872, family Pythonidae), is a South East Asian python, massive and of an almost stocky appearance, with tail clearly distinguishable from the rest of the body and very short.

It is an animal reaching the maximum length of 270 cm, but with much more modest averages, around the 150 cm, and in fact a 180 cm long specimen is already to be considered as a big one. Despite a modest length, however, its weight may be remarkable, thanks to its substantial diameter.

Usually, three subspecies are described of this serpent:

Python curtus curtus, with a much darker colour and present in the island of Sumatra, in its western part. This subspecies features eyes with a standing out iris due to its red or orange colour.

Python curtus breintensteini, with a much clearer colour than the previous one, with pale spots surrounded by black along the sides and typical of Borneo.

Python curtus brongesmai, present in Sumatra island as well as in Malaysia.

The typical livery of this subspecies, illustrated here beside, has a brick colour, but there are populations or single individuals also tending to the yellow or the ochre, and others of a so much bright red colour to be called blood pythons. The so lively and brilliant background colouration is typical of the adult specimens, but is less conspicuous in the juvenile phases. On the background colour, yellow or pale ochre spots create then a splendid and elegant contrast, in some places they are roundish and isolated, in others they merge in a sinuous strip zigzagging whimsically on the back, and accompanied, on the sides, by other elongated or oval yellow spots.

Therefore, the overall look is showily elegant, even if, once in its forest habitat, rich in vegetation of various and changing colours, it is rather difficult to locate it, when it’s staying motionless waiting for the prey, and for this reason and for such reason is rather praised and sought for by the terrarium lovers, in spite of its temperament which, unlike, for instance, the Ball or Royal python (Python regius), cannot be defined as meek. Its typical habitat is the pluvial forest and in particular its “undergrowth”, often fairly luxuriant, and usually the proximity of water is much appreciated, so much that it is not uncommon to find it partially submerged in creeks and streams, and also the swampy zones are particularly congenial to him.

It swims easily, in spite of the …obese look, and crosses easily and gracefully even quite ample water surfaces. Of mainly nocturnal habits, it does not hunt actively, but in ambush, relying on the immobility and on the remarkable camouflage, often stationing close to the water and keeping a “donut” position, in way to better take advantage from the pushing of the coils for popping its head toward the prey, as this one passes within range. The mouth, which can be widely open, as equipped with long and hooked teeth, turned backwards, turned towards the back, and this guarantees a firm and efficacious grip on the seized animal, after which the reptilian wraps quickly the body of the prey with its coils, and finally increases the tightening. 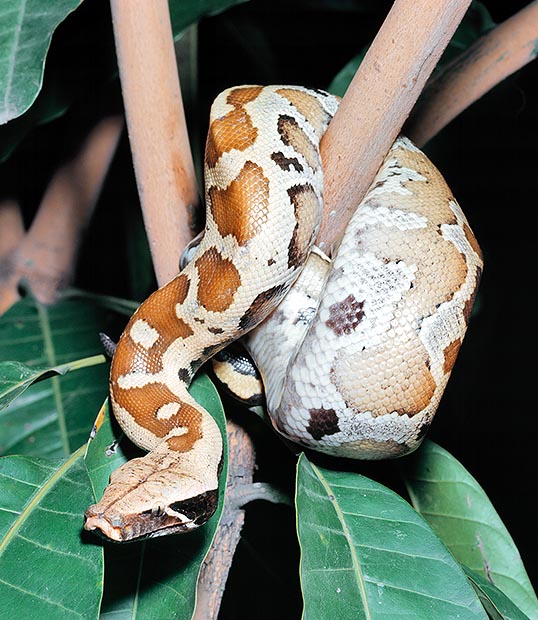 When the victim expels the air from the lungs, the coils decrease their radius, immobilizing progressively the rib cage, till when the next inspiration is prevented and thus causes the death by asphyxia.

Then, the prey is swallowed, as usual, from the head and the ingestion is, at times, a long and laborious process, during which the serpent is particularly vulnerable to its natural foes.

In case a danger comes, however, it hurries to regurgitate the bite, thus rendering easier the escape.

A characteristic distinguishing it from other pythons is, apart the short tail, the surface of the skin, which is, when the touched, very smooth, seen that the scales do not have any trace of keel.

As a matter of fact, the first subspecies, to a closer examination, has two or three supraorbital scales and one or two upper labials coming in contact with the eye, whilst the second subspecies has some supraorbital touching the eye, but none of the upper labial do touch it.

It preferably predates small and medium sized rodents, but, particularly in wetlands, it does not disdain the batrachians. In less frequent instances, they catch also birds, especially preys which tail willingly, in which case, a bird passing by chance by a python in ambush can hardly escape, seen the speed with which it can shoot. At times, also some aquatic bird, while swimming close to a bank or to log where a python curtus is staying, motionless, in ambush, may end, against its will, in its menu, but the biggest levy is formed by small forest mammals. Also cases of predation of other reptilians are described.

The various subspecies of Python curtus are oviparous: The female usually lays not more than ten or twelve big eggs, but there are records of instances where their number was much bigger, then it stays for most of the time twisted around them for incubating them and the eggs hatch after 70-90 days: the newborns are, as an average, 25-30 cm long.

Much sought for species by the lovers, it is not, however, one of the easiest to manage, as it is an irritable and very biting snake and an even 150 cm only long specimen is capable to make a bad wound, which easily becomes infected. Furthermore, especially at the beginning, it often refuses to nourish by itself and requires therefore a forced feeding.

A ruse successfully tried by some for overcoming this drawback is to furnish it a muddy habitat, thing which seems to put the reptilian in good mood and encourage it to accept the food, but which, probably, may create some family tension in the case the serpents lover has a lady.