The species is native to the Andaman Islands, Australia (Northern Territory and Queensland), Bangladesh, Bismarck Archipelago, Borneo, Cambodia, Caroline Islands, China (Hainan), India, Java, Lesser Sunda Islands, Malaysia, Moluccas, Myanmar, Nansei-shoto, New Guinea, Nicobar Islands, Philippines, Solomon Islands, Sri Lanka, Sulawesi, Sumatra, Thailand and Vietnam where it lives, sinking its roots in the mud, in mainly brackish waters along the coasts, lagoons and estuaries, flooded by sea water only for short time, not surviving if permanently submerged. By the beginning of the XX century, it has been introduced in Nigeria where it has rapidly diffused up to Cameroon becoming in some case a pest.

The name of the genus comes from the Malay one “nipah”, that of the species is the present participle of the Latin verb “frutico” = to emit sprouts, with reference to the cespitose look of the plant. 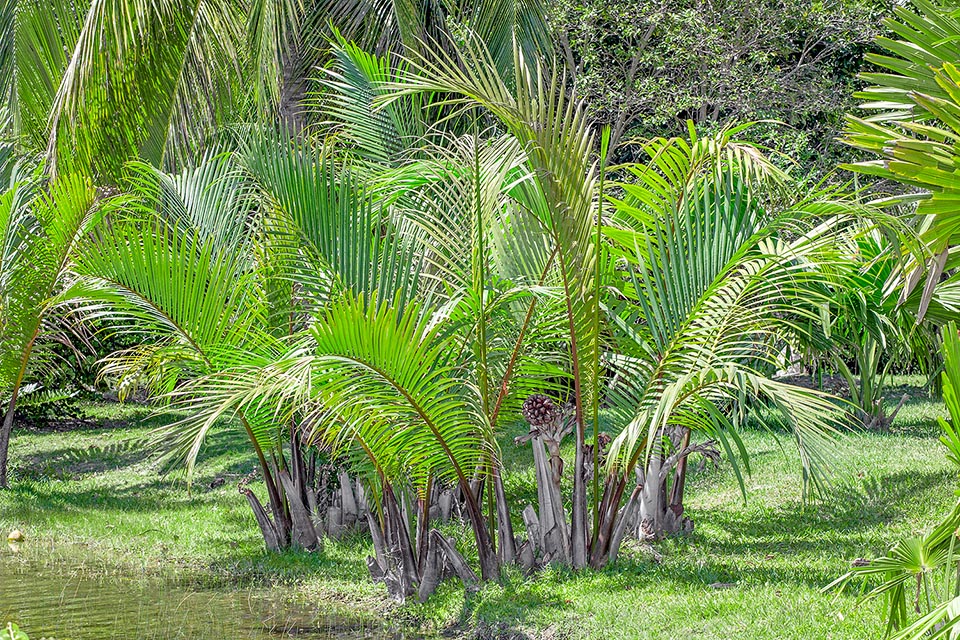 Native to South-East Asia, the Nypa fruticans is one of the oldest palms, and monocotyledons, nowadays existing. It adapts to the habitat of the mangroves playing often an important role for the coastal ecosystem. The stem, procumbent or underground, with prominent foliar scars, reaches 45-50 cm of diameter and ramifies dichotomously © Giuseppe Mazza

The Nypa fruticans Wurmb (1779) is a monoecious species, unarmed, with procumbent or underground stem with the roots in the lowest part and the foliar scars protruding in the upper one, of 45-50 cm of diameter, that ramifies dichotomously. The leaves, long overall 5-12 m, are paripinnate, erect or slightly arcuate, with 50-100 pairs of linear-lanceolate leaflets with acuminate apex, 0,6-1,3 m long and 5-8,5 cm broad, coriaceous, regularly arranged along the rachis on the same level, of glossy dark green color above and covered by a thin waxy layer below; the robust petiole, grooved above and of brown color, is 0,4-1,5 m long. Inflorescences solitary between the leaves (interfoliar), 0,8-1,8 m long, bearing at the apex of the rachis a globose mass of female flowers, of 4-8 cm of diameter, with on the side several ramifications ending in rachillae bearing the male flowers, about 8 cm long, above the female inflorescence. Numerous male flowers, in close contact, sessile, solitary, about 4 mm long, with 3 stamens with the filaments merged in a column, of yellowish color. Female flowers, 1-1,3 cm long, with 3 free carpels, of greenish yellow color, that mature before the male ones (protogyny), favoring the crossed fecundation. Infructescences formed by a globose mass, of 25-50 cm of diameter, of fruits developing from only one of the three carpels, interspersed by the carpellary residues and by fruits not completely developed. 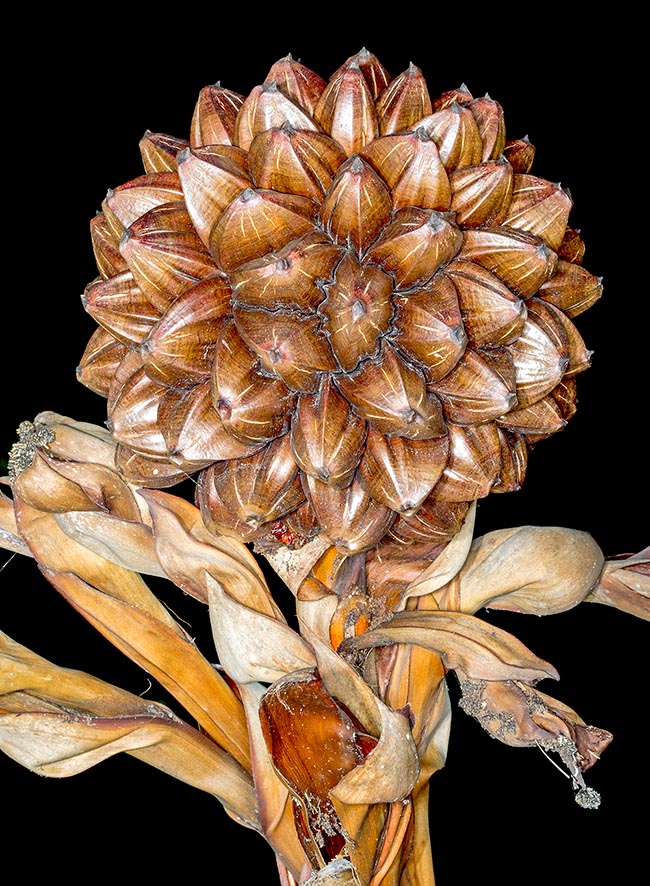 The fruits are edible, in particular the gelatinous endosperm of the unripe ones, sweet, of pleasant taste and rich of antioxidants. From the lymph, got in quantity by cutting the peduncle of the inflorescences, they get sugar, molasses, vinegar and alcoholic beverages. All the parts of the plant are utilized in the traditional medicine © Giuseppe Mazza

Obovoid fruits, angular with irregular longitudinal grooves due to the mutual compression, 8-15 cm long and of 5-9 cm of diameter, woody, of glossy brown colour with fibrous mesocarp, containing only one globose seed, of about 5 cm of length and diameter. The fruits can float, this allows the dispersion through the tides, and the seeds begin to germinate on the plant itself (viviparous).

This species, the only member of the genus Nypa Steck 1857, displays unique characteristics, from the vegetative point of view and its adaptation to the habitat of the mangroves, as well as for the reproductive, due to the structure of the inflorescence and of the flowers, and in a sense primitive, within the Arecaceae, fossil finds discovered in various part of the planet and dating back to the Upper Cretaceous (about 70 million of years ago) in fact do of it one of the oldest palms, and monocotyledons, presently living.

It plays an important rôle for the coastal ecosystem forming thick colonies that prevent the erosion, protect the close behind areas by dampening the impact of storms and floodings and furnish food, shelter and the suitable environment for the reproduction to many animal species, that in their turn are an important food source for the riparian populations. But the importance of the plant does not end here, the dry leaves, resistant and long lasting, are amply utilized as cover of the rural dwellings, for fabricating mats, baskets, bags, headgears, clothing, ornaments and even for wrapping the cigarettes. The dry petioles are utilized as fishing nets floatings and as fuel, from which salt can be gotten. From the lymph, obtained in quantity by cutting the peduncle of the inflorescences, they get sugar, molasses, vinegar, alcoholic beverages (“toddy” and “tupa”) and spirits. For this purpose, in some zones it is cultivated for family use and, in greater extent, for small agri-food companies; it may be also a source of ethanol to use as biofuel. The fruits are edible, in particular the gelatinous endosperm of the unripe ones, of sweet taste and rich of antioxidants, is consumed as it is, in syrup or transformed in gelatinous candies. Finally, all parts of the plant are utilized in the traditional medicine of the origin countries for various pathologies.

Of huge ornamental effect, but little utilized in this way for the size it may reach and for its particular needs, it is mainly present in botanical gardens and in specialized collections. It can be cultivated in the tropical and subtropical humid climate regions with high rainfall well distributed all over the year, in full sun, and can grow in various types of soil, even not submerged, from slightly acidic to slightly alkaline, provided maintained constantly wet, and is not necessary the use of brackish water, as it grows well also with fresh water.