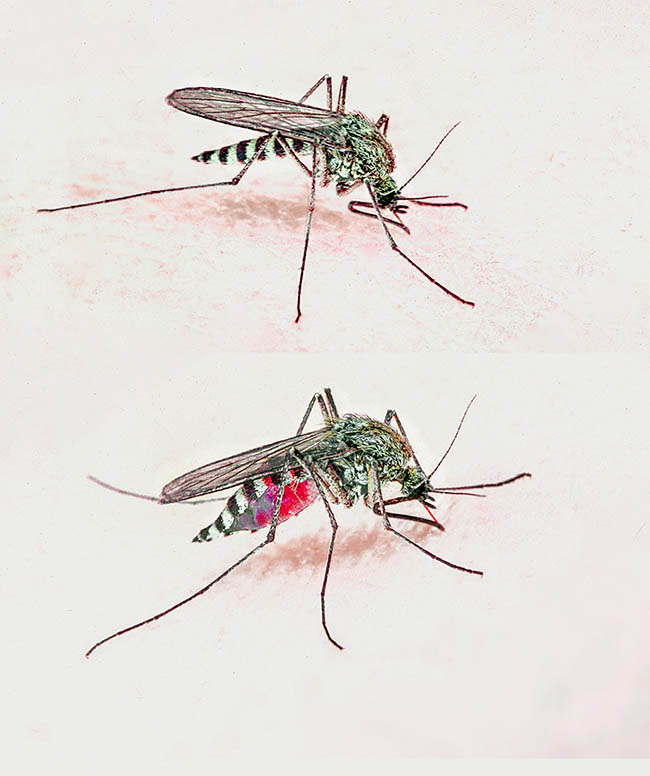 The Paddy mosquito is very aggressive towards man. The female, bending the lower lip, injects with the buccal stylets into the skin of the victim an anaesthetic and fluidifying saliva. Then it begins to suck the blood © G. Mazza

The Paddy mosquito (Ochlerotatus caspius) is a Dipteran of the family of the Culicidae.

The name of the genus Ochlerotatus comes from the old Greek  “oχληρός” (ochliròs) that means boring, annoying. In order to highlight this behaviour the superlative suffix  “ότaτos” has been added.

The specific term caspius refers, in Latin, to the Caspian zone thought to be the origin of the species.

The common name refers to the paddy fields where it often finds the optimal habitat for its development.

In Europe the Paddy mosquito is sadly known since ancient times because the females, unlike other species of endemic mosquitoes, are active and sting humans and animals even in broad daylight.

We cannot exclude that the third plague of Egypt, of biblical memory, was referring to this anthropophilic Dipteran that lives in close relationship with the annual floodings of the Nile River.

“And the Lord said Moses: stretch out thy rod, and smite the dust of the land, that may become lice throughout all the land of Egypt. When Aaron stretched out his hand with the rod and struck the dust of the ground, lice came upon men and animals. All the dust throughout Egypt became lice.”

Still in the Middle Ages the swarms that invaded the inhabited centres were considered as a divine punishment.

From the beginning of the century, with the intense and rapid commercial exchanges, have been introduced two exotic species that have a behaviour similar: the Tiger mosquito (Aedes albopictus) and the Korean mosquito (Aedes koreicus). This last species has a high reproductive capacity and is very resistant to the low temperatures.

The Paddy mosquito has a palearctic distribution extending from Africa to Eurasia, and is diffused from West to East, from the Pacific coast to the Atlantic one; from North to South is present from Finland to North Africa.

In many countries it is endemically active along the coastal zones where it reproduces in the brackish water of the swamps.

Other substrata suitable for its development are the lands periodically flooded for natural causes, or for the cultivation practices; the paddy fields being the best, in which the cultivation is done with the periodical submergence of the plants. 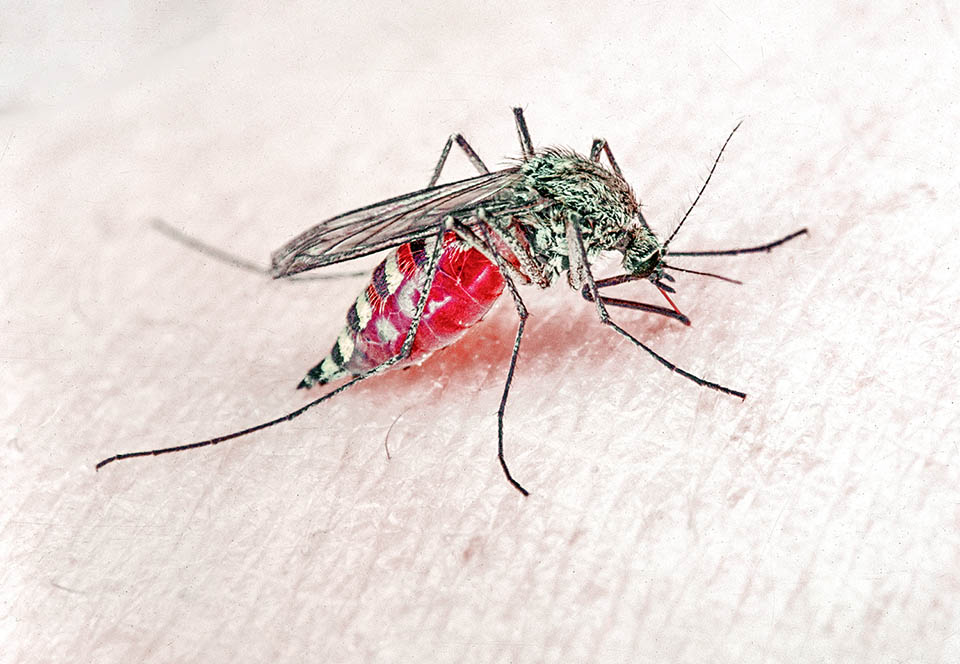 Once the meal is over, the abdominal pouch is full. The females often need a meal of blood for maturing the eggs © Giuseppe Mazza

During the period of dry, the females oviposit numerous eggs that will hatch just after the submergence of the soil.

The males have feathery antennae and do not feed on blood.

The females, equipped with mouth piercing apparatus suitable for stinging and for sucking in liquid foods, often have the necessity to get a blood-based meal for maturing the eggs.

The legs are long and delicate; the wings are narrow and long with many veins and small scales.

In the abdomen of the males are present complex shaped genital armours as, immediately after the birth, a 180° rotation takes place. 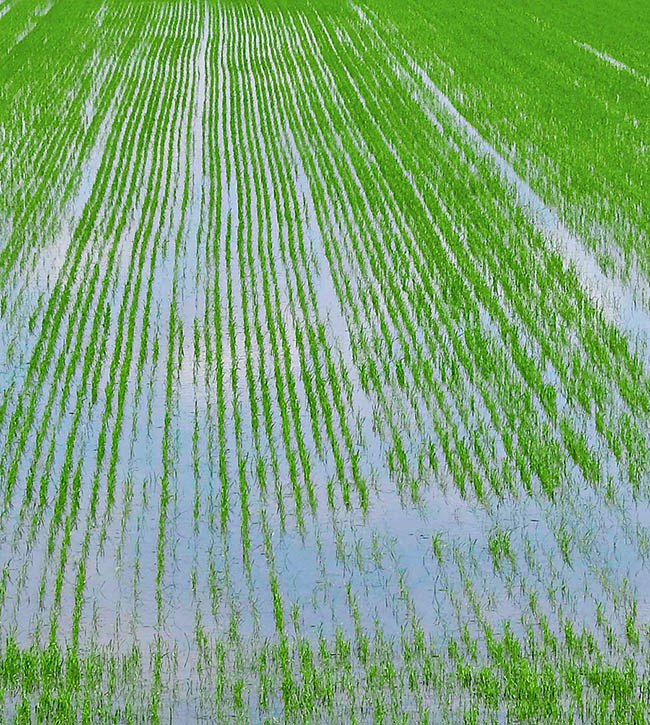 The paddy field is the ideal site for this species reproduction. The eggs, laid when it’s in dry, glued in groups, have a protecting layer that blocks the development allowing them to overcome long periods of drought © Stefano Contin

In the females are present structures called cerci, useful for mating; the glands attached to the genital organs, upon the oviposition, secrete a liquid that glues the eggs together in groups.

The larvae are vermiform, with developed head (eucefalo) and with breathing openings (stigmas) located in the last stretch of the abdomen.

The Ochlerotatus caspius adults have the body long about one centimetre, for more or less brownish colour; in the typical form the dorsal surface of the abdominal segments presents a brownish pattern with pale transversal striae; a clear line is present longitudinally.

Also on the veins of the wings are present brown and yellow scales. Characteristic clear striae are present in the legs.

The mouth apparatus of the females is equipped with long and thin stinger-like proboscises, in connection with the salivary glands, with which they sting and suck the blood necessary for the maturation of the eggs.

The males, easy to recognize due to their characteristic plumose antennae, feed only on sugary liquids and not on blood.

From the microscopic examination of special preparations of their peculiar genital armours is possible the identification of the species.

The eggs are equipped with a protective case called chorion. When just laid on the dry ground, they block embryonic development and are able to overcome even long periods of drought.

The larva is vermiform with the head well developed (eucefalo), devoid of legs.

The newly born larvae hatch from the egg thanks to a special process present in their head.

They complete their development in the water and take in the oxygen through the breathing stigmas, placed in a structure connecting them with the outside, called siphon, located in the terminal part of the abdomen. The complex mouth apparatus is suitable for chewing, and is equipped with mouth brushes with which they filtre the substrate.

The pupa has the head and the thorax enlarged; in this last region are present two respiratory trumpets; the abdomen is quite thin compared to the front of the body. 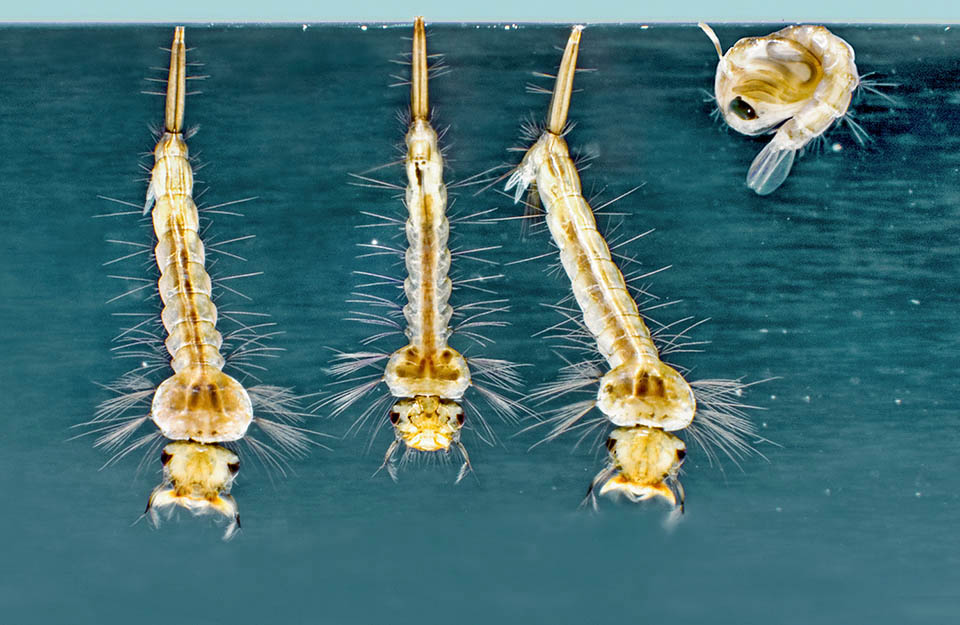 When the site where they have been laid is flooded the eggs hatch immediately. The larvae nourish of plankton and emerge with a siphon to breathe. The pupa, top right, has the curious look of a comma. The head is as swollen as the thorax that has two breathing spiracles. The abdomen is thin with a couple of swimming blades © G. Mazza

The reproductive strategy of the Paddy mosquito is focused on a rapid demographic increment and development of the very vulnerable juvenile stages.

In addition to investing a lot in the reproductive sphere, the species lives in unstable environments where the death rate is high and often sudden. Due to the above mentioned biological characteristics the Dipteran reaches high population densities in function of the environmental resources that are destined to wear out quickly, and often suddenly, with very high death rates.

The survival of the species depends from the rapidity of larval development and from the capacity of dispersion and colonisation of suitable environments by the adults.

The adults, who live up to three months, are very mobile and, if the thermo hygrometric conditions are favourable, they can travel many kilometres from the site of flickering, thanks to the aerial currents. 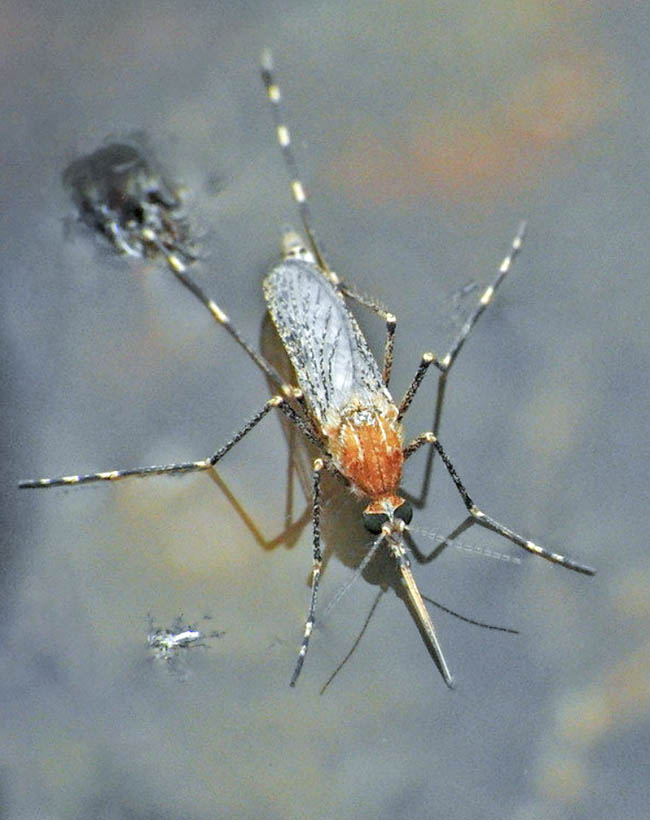 The males have plumose antennae feed on sugary liquids. This is a female just flickered. After the mating it will go looking for blood hitting also domestic animals. However, it only rarely enters a house © Mirella Zeeders

The swarms following trails of volatile compounds, often reach areas suitable for the oviposition, that they find among those previously submerged, or that, presumably, will be such in the future.

Their intense summer activity decreases in autumn and stops with the lowering of the temperatures; normally the species spends the winter in the egg stage.

The adults flicker all together and move in mass, forming veritable and real swarms, that create serious inconveniences in the anthropized areas where, only on occasion of heavy summer rains, may form temporary outbreaks of infestation activated by migrant individuals.

The females sting, during the cooler hours of the day, especially in the shaded sites and at the sunset. Their persistent attacks are particularly troublesome for the man and for the domestic animals. Occasionally, they enter the buildings.

Besides the annoyance, the stings often cause blisters in the subjects reactive to the anticoagulants and to the other salivary substances the female emits through the suction hole.

The Culicid is a potential carrier of virus agents of diseases such as the “helminthiasis” of the animals, sustained by Nematodes of the genus Dirofilaria that at times can be transmitted to the humans. Presently in Italy and in the other European countries, are not reported serious health problems.

The eggs are laid singly, or in small groups, on the humid soil or on the edge of puddles, even if shallow; their hatching is simultaneous and and takes place only after a prolonged submersion.

The larvae that shell out piercing the chorion, usually complete their development in about 15 days. The high summer temperatures can reduce such a period even to 4-5 days.

Once completed the development, the last larval stage undergoes the metamorphosis and transforms in pupa and after two days the adult flickers and frees from the pupal exuvia and, after the hardening of the tegument, flies away.

Formerly known as Aedes caspius, after Reinert’s revision in 2000, it has been transferred to what was previously considered a subgenus, and therefore the current scientific name is Ochlerotatus caspius (Pallas, 1771).