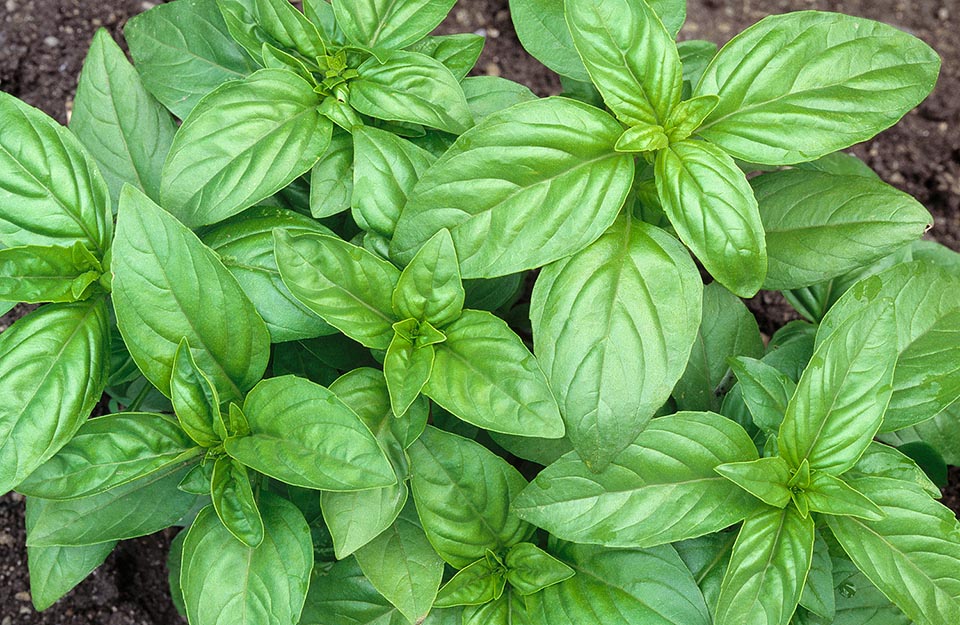 Difficult to classify, due to its polymoprhy, the basil (Ocimum basilicum) is an herbaceous species native to tropical Asia © Giuseppe Mazza

The genus Ocimum includes about sixty aromatic species diffused in the tropical regions of Asia and Africa (paleo-tropical distribution). Some of them are perennial or annual herbaceous, others are evergreen shrubs.

The Ocimum basilicum L. (1753), is an annual herbaceous plant, 20 to 60 cm tall, native to the tropical regions of Asia. 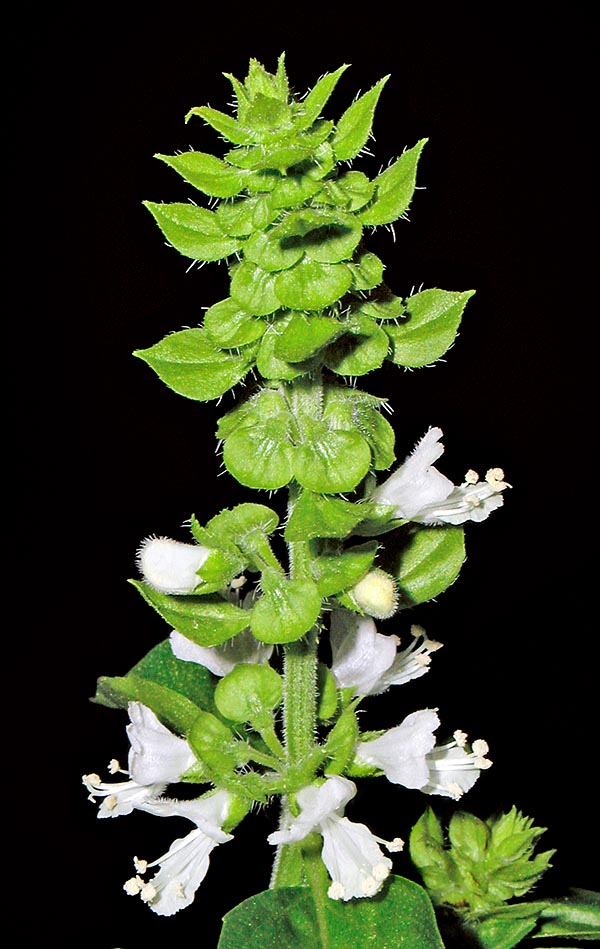 Widely cultivated, it is rare to find it grown wild outside the origin locations. It is a species of difficult classification, due to its polymorphy.

The term “Ocimum” comes from the Greek word “Ωκἰμον” (Okimon), indicating the plant of the basil.

The specific name “basilicum” comes from the Greek term “βασιλικόσ” (Basilikos) or from the Latin “basilicum” with the meaning of “worthy of a king”.

As a matter of fact, in the old times, among the populations of Asia, of Middle East, and of the Mediterranean the basil was utilized in the production of precious perfumes and in the celebration of holy rites. Also its harvesting foresaw very complex rituals, performed by persons considered as “pure” by the community.

The plant of the basil was present not so much in the feeding as in the habits and the superstitions. It was utilized as antiseptic in the treatment of wounds and also in the embalming processes, being considered auspicious in the passage to the otherworld.

At times it got a more negative connotation, becoming a symbol of bad luck. Some sources hypothesize that the term “basil” is to be referred to “basilisk”, the legendary reptile, similar to a snake, that could kill with a single glance and with its strong venom, against which the basil was considered as the antidote.

In the old times it was introduced in the Mediterranean basin by Greeks and Romans. Since the Middle Ages it diffused in the rest of Europe, whilst it reached Americas at the same time of the explorations of that continent.

It is very common in the Mediterranean area, where is always present in the orchards, in the aromatic and medicinal plants gardens and on the balconies. The varieties with purple leaves are utilized in the borders and in the flowerbeds to enrich the colour of the garden and of the orchard. It is utilized in the kitchen as flavoring, in particular in the Genovese pesto, of which is the main ingredient together with garlic, pine nuts, extra virgin olive oil, coarse salt, pecorino and Parmesan cheeses. 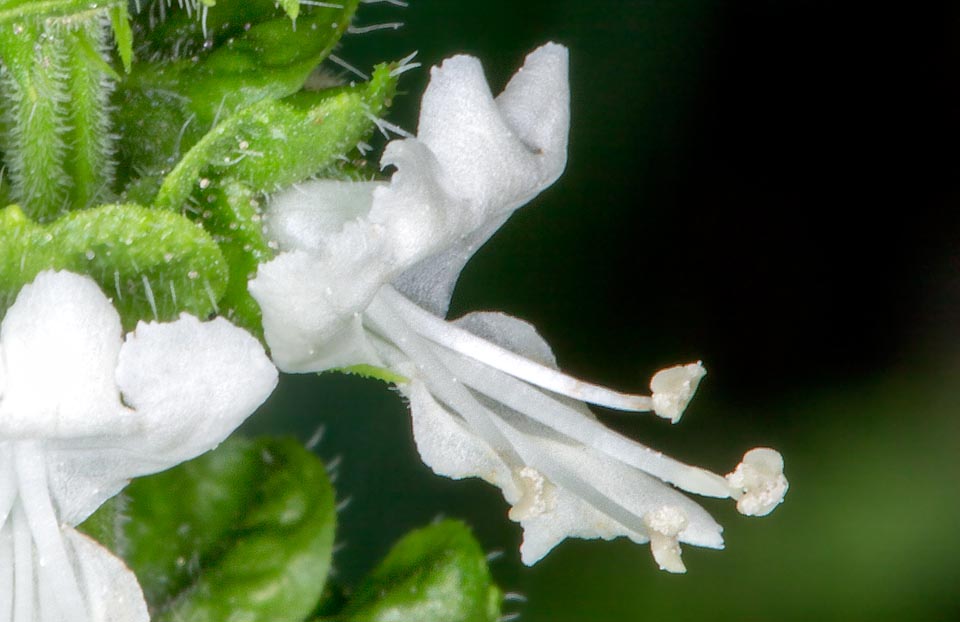 Here the flower, typical of Labiate family, now called Lamiaceae; plants like sage, rosemary, mint, thyme, oregano or lavender that are not doing nothing all day, looking at the sky with the mouth wide open, but invent substances nowadays appreciated by the man for defending himself from the bite of the herbivores © Giuseppe Mazza

Very common is the use of adding fresh basil leaves for flavoring salads, tomato sauces, soups, vegetable soups, besides meat, fishes and seafood dishes. The active principle is volatile, therefore it’s convenient to add the leaves to the dish only once cooking is completed.

The stem is erect, ramified, with quadrangular section. 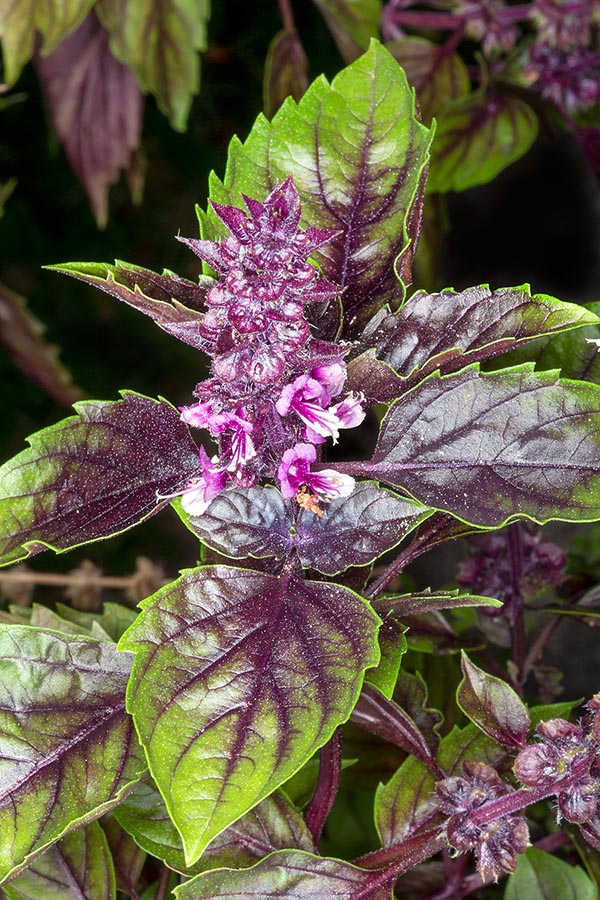 So the basil, that means “worthy of a king”, cultivated since millennia, has entered the human life, not only in the cuisine but for old sacred rites, beliefs and medicinal virtues. It has nowadays several cultivars like this unusual 'Purple Ruffles', with pink flowers and leaves shaded of purple with spicy aroma © Giuseppe Mazza

The leaves are opposite, petiolate, ovate, with more or less sharp apex, up to 6 cm long. The colour is bright green, the margin is dentate, the surface is glossy and glabrous, of bullous appearance. During the warm hours or when touched, they emit their intense and unmistakable aroma.

The flowers are bilabiate, white or just pinkish, numerous, 10-12 mm long, merged in verticillate spikes. Each verticil has at the base a couple of leaflets transformed in bracts. Each flower has a calyx formed by an entire upper lip and an inferior one subdivided in 4 small teeth.

The corolla has an upper lip divided in 4 lobes and an inferior one entire. The fruits are 4 achenes of dark colour. The root is a taproot.

Blooming occurs between May and September.

The traditional medicine attributes to the active principle of the basil, an essential oil that is the sum of many constituents, having different actions: tonic, digestive, antispasmodic, intestinal antiseptic, emmenagogue, diuretic.

The infusion of dried leaves, taken after the meals, is a relief from headaches, anxiety and insomnia. Rinses and gargles soothe the inflammations to the mouth or the throat and perfume the breath. The fresh leaves in the salads lessen nausea and stomach cramps. We remind that, in any case, the internal use of the officinal plants is to be prescribed and followed by a physician or an expert of the matter.

The leaves of basil are used also in the production of digestive liqueurs and of cosmetics products. A bag of fresh leaves of basil in the bath water has a deodorant and tonic effect. The essential oil of basil seems effective as insect repellent.

The basil is cultivated by seed in seedbed or in cold box, with successive transplant in pot or in the open ground.

The small plants are to be interred spaced 25-30 cm one from the other.

It can be multiplicated also by cutting, taking the tops and making them to root in water. It is suggested to utilize a light loam, loose, to chose a well sunny position and to make frequent watering. The basil is sensitive to the cold and does not bear temperatures under the 10 °C. 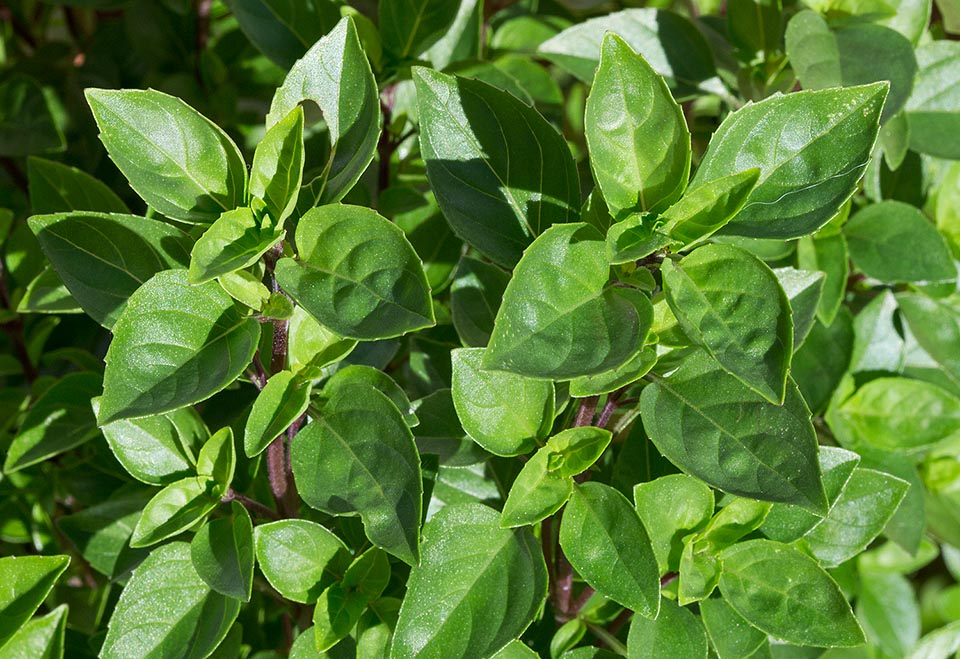 The 'Columnaris', rigid and bushy, can be 60 cm tall. Seen its origin the basil suffers from cold and when the lowest get down under 10 °C the plant dies © Giuseppe Mazza

At harvesting, are to be cut the bigger leaves and the tops. The leaves collected before blooming have a more intense perfume.

The pollarding of the tops favors the development of the lateral sprouts. The leaves and the flowering tops can be dried in the shade and conserved in glass or porcelain jars, however during this treatment most of the aroma is lost. 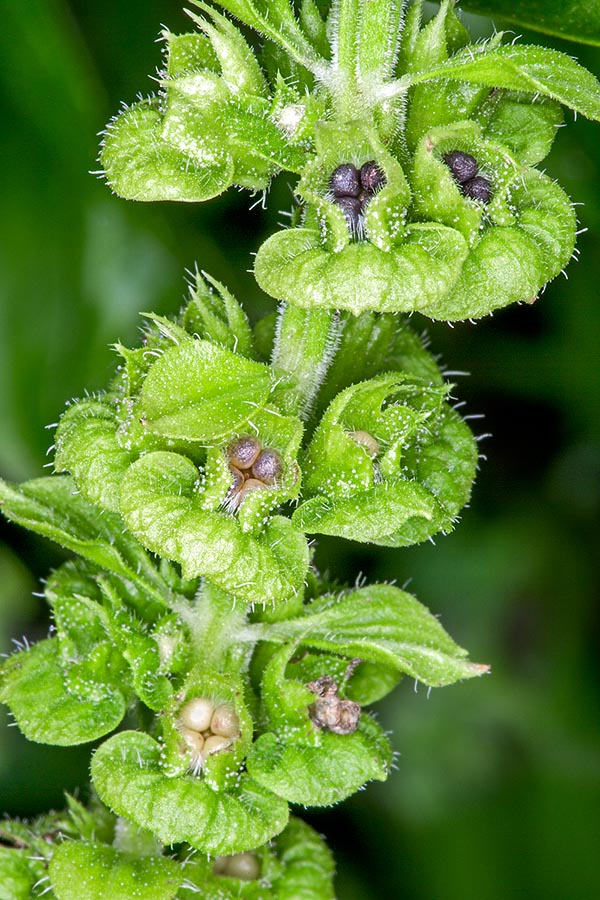 Cuttings apart, we can overcome the obstacle with the seeds, seen here at various stages of ripening © Giuseppe Mazza

The fresh leaves can be conserved in a glass jar, covered by oil and with addition of salt.

The basil can be affected by diseases caused by parasitic fungi (Botrytis cinerea, and Fusarium oxysporum) that lead to the rotting of the leaves.

Tens of cultivars and varieties of basil are known, different for the morphology and the more or less intense aroma. The different combination of the constituents of the essential oil grant the aroma of the basil hints of jasmine, licorice, camphor, cinnamon, lemon, mint, cloves. We lisr here some cultivars:

• Ocimum basilicum ‘Genovese’ – It is the most diffused type in Italy, utilized in Liguria for preparing the pesto. Annual or perennial plant with erect posture. The leaves, of dark green colour with purplish streaks, scent of jasmine, lemon and licorice.

• Ocimum basilicum ‘Minimum’ – Called also “Greek basil”, is a small shrub that does not surpass the 30 cm of height and the 30 cm of diameter, suitable also for the colder climates. The flowers are white. The leaves are small and elongated, with intense scent, sweeter and less pungent than the variety with wide leaves.

• Ocimum basilicum ‘Purple Ruffles’ – Called also “Mexican basil”, is an herbaceous or perennial plant with shrubby posture. The flowers are of an intense pink colour. The leaves, very ornamental, are oval, glossy, purple, with jagged margins. They have a spicy aroma.