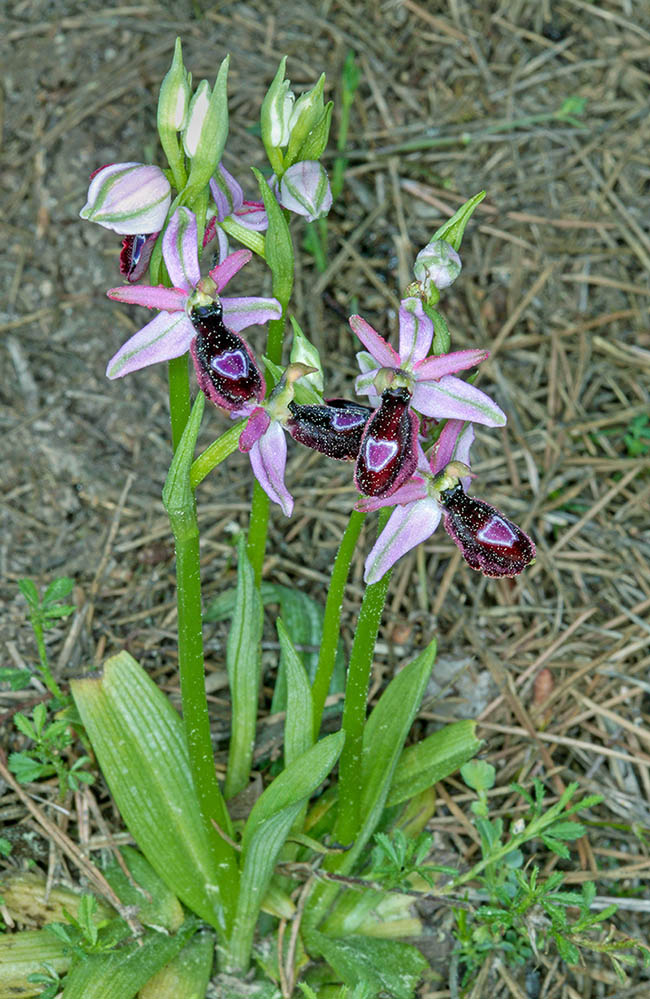 The genus Ophrys was described by Linnaeus in 1753 and comes from the ancient Greek  “ὀφρύς” (ophrýs), eyebrow, due to the hairiness on the labellum.

Ophrys bertolonii is a species of orchid described by the Italian botanist Giuseppe Moretti in 1823 and dedicated to the Bolognese botanist and physician Antonio Bertoloni (1775-1869).

For this reason, is also known with the name of Bertoloni’s bee orchid. Its distribution  extends in the central and southern Mediterranean, including the Italian Peninsula, Sicily, Malta, the Balkans and Greece, colonizing meadows, garrigues, pastures, woodlands and woods clearings up to an altitude of 1000 m.

Actually, after some botanists the O. bertolonii described by Moretti’s protologue should coincide with O. benacensis, present in North Italy, consequently the populations of South Italy and of Sicily previously referred to that entity should be attributed to Ophrys romolinii Soca 2011, taxon expressly described to resolve this discrepancy.

This is a robust plant, not more than 30 cm tall, with basal oblong-lanceolate leaves, arranged in rosette, whilst the cauline are minor and wrap the stem.

The inflorescence is loose, bearing 2-8 rather big flowers. These last are formed by 3 showy ovate-lanceolate sepals usually pinkish (rarely whitish or greenish) and 2 big petals, long two thirds of the sepals, linear to oblong, with straight borders, of a more intense pink-purplish colour.

The labellum is entire (at times trilobate), blackish, covered by a dense hairiness on the lttle revolute margins and equipped with a yellow-greenish apical appendage. The macula is placed at 2/3 of the labellum, entire, well marked (glossy) and blue to dark red. Style and staminal filaments are fused in an elongated gybostemium ending on an acuminate rostrum, placed at right angle with respect to the labellum. The stigmatic cavity is higher than wide, with a small flat portion that separates it from two globose and prominent blackish pseudo-eyes. 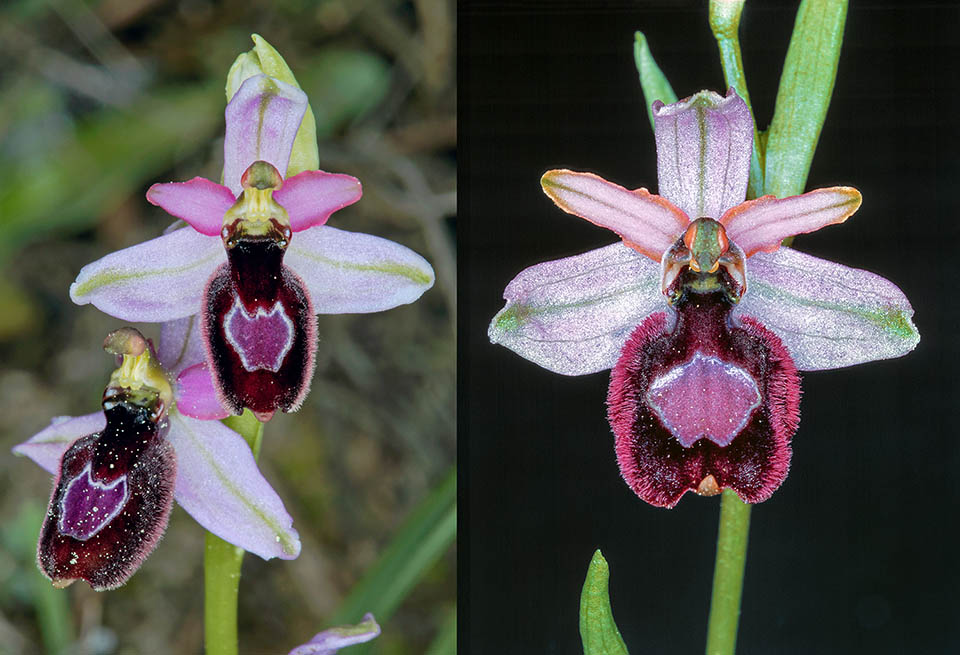 Pollination occurs by means of the hymenopterans Megachile parietina, M. pyrenaica and M. sicula (Megachilidae). As a matter of fact, these insects during the copulation assume a particular position arching the abdomen, well adapting to the saddle-shaped labellum of O. bertolonii.

The fruits are capsules containing several seeds poor in reserve substanced that require the presence of specific mycorrhyzae for the germination.

The species blooms during the springtime from March to June depending on the geographical area and the altitude, whilst spends the summer period in a dormant form thanks to the underground organs it is provided of, completely drying the aerial part.