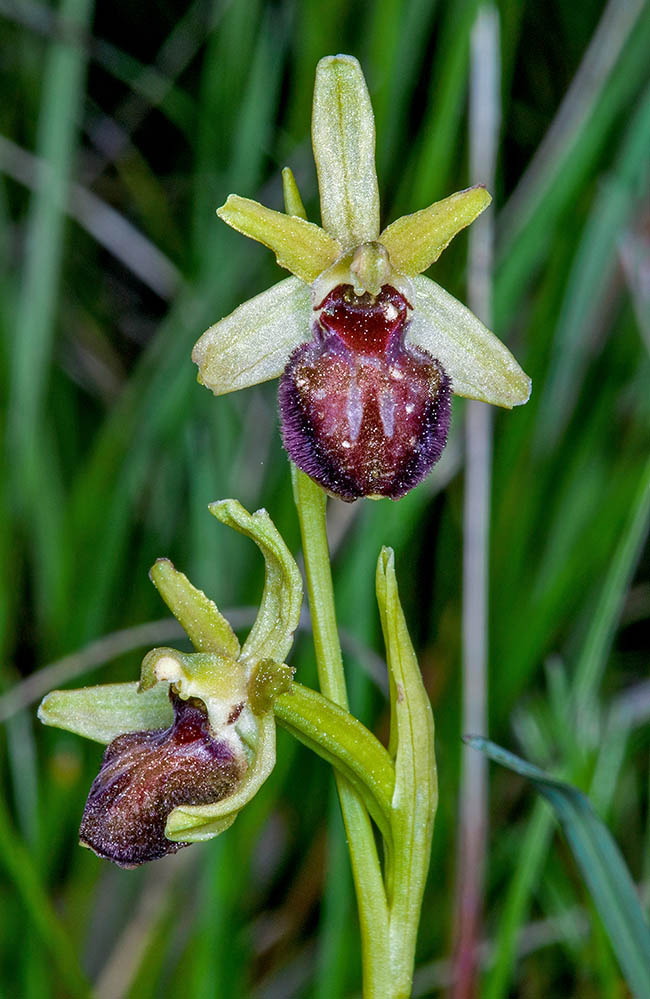 With at least 3 subspecies, Ophrys incubacea has a vast range going from the Iberian Peninsula to the Balkans © Giuseppe Mazza

Ophrys incubacea Bianca is an orchid with an ample range included between the Iberian Peninsula and the Balkans, well represented also in southern France and in Italy, where it is reported in almost all regions including the great islands.

The species has been described in 1842 by the Italian botanist Giuseppe BIanca within an important monograph concerning the Sicilian orchids (Orchideae Siculae: Sive Enumeratio Orchidearum in Sicilia Hucusque Detectarum), written by Agostino Todaro.

The name of the genus Ophrys was given by Linnaeus in 1753 referring to the old Greek  “οφρύς”, eyebrow, due to the hairiness on the labellum. The specific epithet incubacea perhaps comes from the Latin “incubus”, referring to the very dark colour of the flower.

Inside it, are recognized numerous varieties and at least three subspecies, such as subsp. incubacea, subsp. brutia and subsp. castri-caesaris.

In the whole, this species results rather near, on the morphological point of view, to the entities belonging to the series sphegodes and passionis.

The ecological needs of this orchid are similar to those of other species of the genus Ophrys, preferring open areas, such as arid meadows, wood clearings and garrigues, from 0 to 1200 m of altitude.

It is a bulbous geophyte, that is a perennial plant provided with an underground organ (bulb) necessary for overcoming the Mediterranean summer season characterized by the absence of precipitations.

Conversely, the plant performs its biological cycle within a few months between winter and spring, with the appearance of the leaves and the blooming (usually between March and May).

At the moment of maximum development, the plant is 20-50 cm tall and presents erect and flexible stems departing from a rosette of basal ovate-lanceolate leaves.

The inflorescence bears 3-8 rather big flowers united in a loose spike. The three sepals are green, of oval-lanceolate shape and with more or less acuminate apex, the median being slightly bent over the gynostemium. The two upper petals are shorter and darker than the sepals, having a brown-greenish or brown reddish colour, lanceolate, with wavy borders and truncated tips. 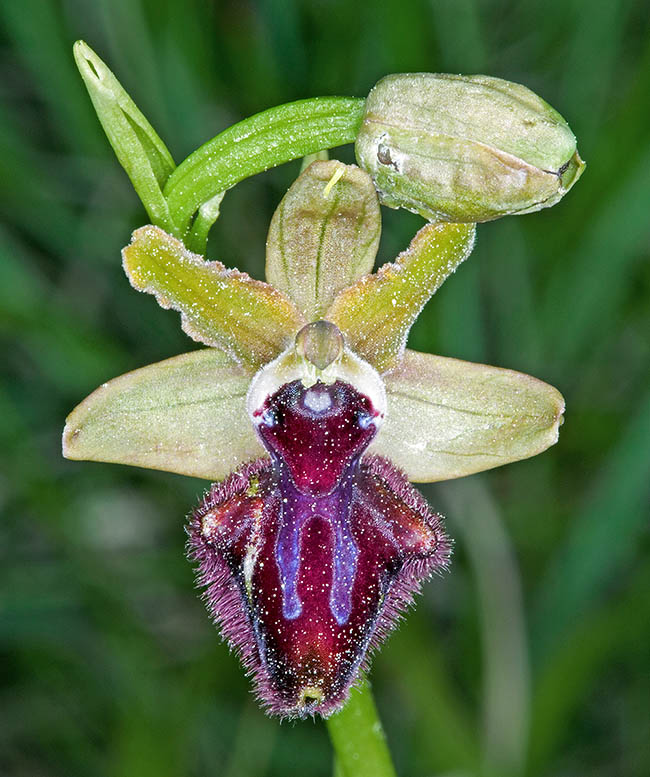 The dark labellum has some significant up to 4 mm long bumps, glabrous internally and hairy outside. The pollination is entrusted to the males of Andrena mori, an apid misled by the appearance to effect a pseudocopulation © Giuseppe Mazza

There are some significant bumps up to 4 mm long, glabrous internally and externally hairy.

The basal background is dark brown or reddish, whilst the macula is formed by two bluish or grey parallel bands.

The ramifications of the macula at times reach the stigmatic cavity that only rarely is edged in white.

The apiculus is very reduced and is inserted into a small groove.

The stigmatic cavity has a background adorned with a white spot and also the outer wall is white with black pseudo eyes edged in blue or white.

The reproductive organs, and that is stamens and pistil, are fused in the gynostemium, characterized by a short and acute rostrum.

Likewise the other species of Ophrys, the morphology of the labellum mimics the shape and the colours of the females of some insects, attracting and guiling the males, causing them to perform a pseudocopulation  that allows the pollination.

The latter is done by the aphid Andrena morio.

The fruit is a small capsule containing very many small seeds, whose germination is linked to the presence of symbiont fungi whose hyphae otherwise, due to the present scarce reserve substances, would not be able to lead to development the seedling.