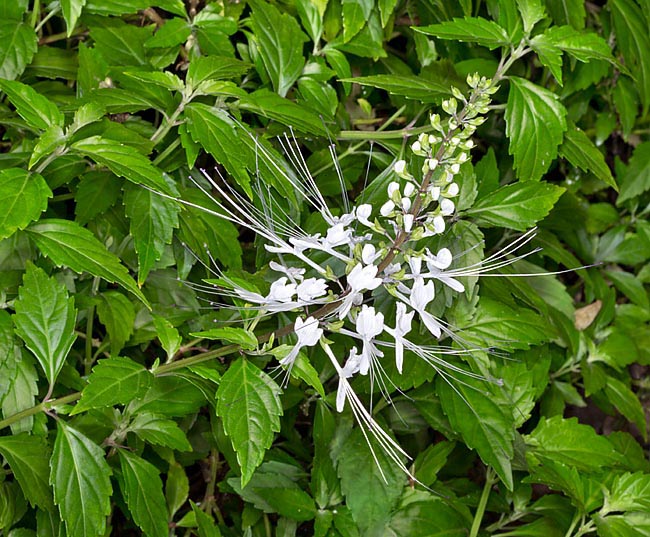 The Orthosiphon aristatus (Blume) Miq. (1858) is an evergreen perennial, 0,3-1,2 m tall, herbaceous species, with ramified ascending stems with quadrangular section of reddish brown colour. The leaves, on a 0,5-4 cm long petiole, are simple, opposite, decussate, rhomboidal to ovate with cuneate base, pointed apex and toothed margins, 4-9 cm long and 2-5 cm broad, of glossy intense green colour.

It reproduces by seed, using an organic soil maintained humid at the temperature of 22-24 °C, and easily by tip cutting, also in water, and by air layering. Fast growing species and of easy cultivation with ornamental flowering continuing from spring to autumn, of agreeable effect in mass, as soil cover or for informal and mixed edges, utilizable in the humid tropical and subtropical climate zones and marginally in the warm temperate ones, in sheltered position, where it can resist to drops of temperature of some degrees under 0 °C for a short time.

It requires full sun or at most filtered solar light and well drained soils rich of organic substance, slightly acidic to slightly alkaline, maintained almost constantly humid, but without stagnations, as it does not like long drought periods; it well bears the pruning for a more compact appearance and for stimulating the blooming. Where the climate does not allow the permanent cultivation in open air, it can be treated as annual, with blooming from mid-summer to autumn, or cultivated in pot in order to be sheltered during the coldest months in particularly luminous location, like behind a south-facing window, in organic loam with regular watering, allowing the substratum to just dry up partially before giving water again, and fertilizations with hydro-soluble balanced products from spring to autumn.

The decoction of dried leaves and extremities of the stem is since remote times used in the popular medicine all over South-East Asia, mainly as diuretic and antibacterial for the urinary tract, in particular at Java it is traditionally used also for treating the hypertension and diabetes.

Scientific studies conducted until recently (2013) have not yet found the exact correlation between the active principles contained and the attributed therapeutic effects, a synergic effect is hypothesized, and in any case the data on the real efficacy as well as on its safety are still not sufficient, therefore the prolonged use should be avoided, in any case the use is contraindicated for the persons suffering from heart and renal failure. Laboratory studies have however evidenced the presence of flavonoids, triterpenes and one glycoside (orthosiphonin) of pharmacological interest.