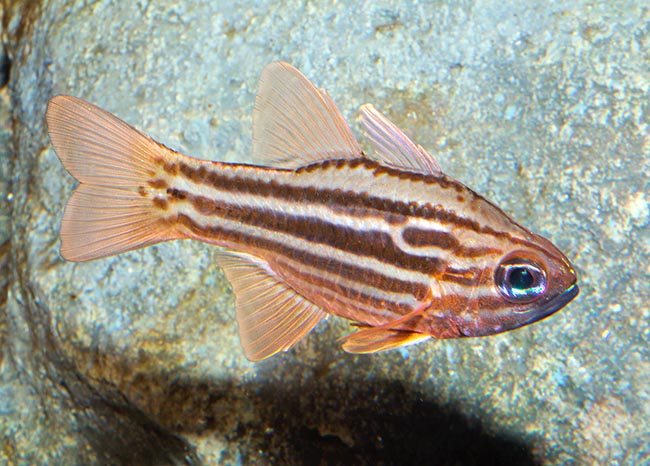 Ostorhinchus compressus, not frequent in aquaria, is mainly active by night © Giuseppe Mazza

Blue-eye cardinalfish, called also Ochre-striped cardinalfish (Ostorhinchus compressus Smith & Radcliffe, 1911), once known as Apogon compressus, belongs to the class of Actinopterygii, the ray-finned fishes, to the order of Perciformes and to the family of Apogonidae rich of more than 200 species at home in the tropical seas, with some exception, like our Apogon imberbis of the Mediterranean or the freshwater species belonging to the genus Glossamia.

The etymology of the genus comes from the Greek “osteon” = bone and “rygcos” = beak, due to the bony jaws, very much advanced and jagged, which take the place of the teeth.

The name of the species comes from the Latin “compressus” = narrow, because its body is rather flat and less high than other Apogonidae.

It lives in the tropical waters of the Western Pacific Ocean and in the adjacent zones of the Indian Ocean. As an indication, we find it in Malaysia, Indonesia, New Guinea, Philippines, Taiwan and in the Japanese islands of Ryukyu. Southwards, it has colonized the Australian Great Barrier Reef, the Solomon Islands, the Vanuatu Islands and New Caledonia.

It moves around among the corals at low depths, as it never goes down more than 20 m. 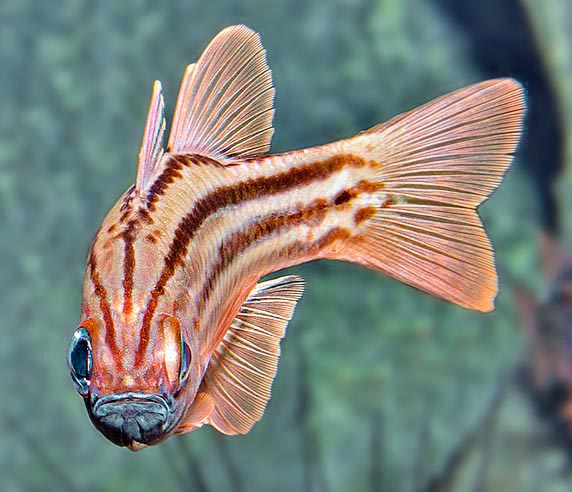 The Ostorhinchus compressus can reach the 12 cm, great caudal fin included, but, usually, it barely exceeds the 8 cm.

The background colour, which interests also the more or less the translucent fins, is white-pink with shades of bronze and on this we note six brown ochrous horizontal stripes which transform in spots in the caudal zone. The great eye, with typical blue iridescences, is in line with the nocturnal activity of the species.

The blue-eye cardinalfish spends the day hidden among the branches of the corals belonging to the genera Porites and Acropora, rich of spikes which keep away the aggressors. In the evening it gets out hunting small crustaceans, little worms and other benthic animals. It lives in small schools, but during the reproductive period, which in Australia stands between October and February, pairs take form. The males, as is usual among the Apogonidae, collect the fecundated eggs and keep them in their mouth for 3-5 days till the hatching moment comes. It has reproduced even in captivity, but it is not a frequent species in the aquaria due to the relatively modest livery and its nocturnal habits.

The populations are not affected by the deterioration of the reefs connected to the climate changes, do tolerate the pollution and can double their members in less than 15 months. The vulnerability index of the species is, therefore, very low: just 13 on a scale of 100.