The polychrome Yellowstriped cardinal- fish (Ostorhinchus cyanosoma Bleeker, 1853), known also as Blue-lined Cardinalfish, belongs to the class of Actinopterygii, the fishes with the rayed fins, to the order of Perciformes and to the family of the Apogonidae rich of more than 200 species present in the tropical seas, with some exception like the Apogon imberbis of the Mediterranean or the freshwater species belonging to the genus Glossamia.

It lives in the tropical waters of the Indo-Pacific. Indicatively, we find it from Mozambique and Madagascar up to the Red Sea. Then, at the Maldives, the Cocos Islands, in Australia, Indonesia, New Guinea, Philippines, Taiwan and in the Japanese islands of Ryukyu. Eastwards, it has reached the Solomon Islands, the Vanuatu Islands, the Fijis, the New Caledonia and Tonga. 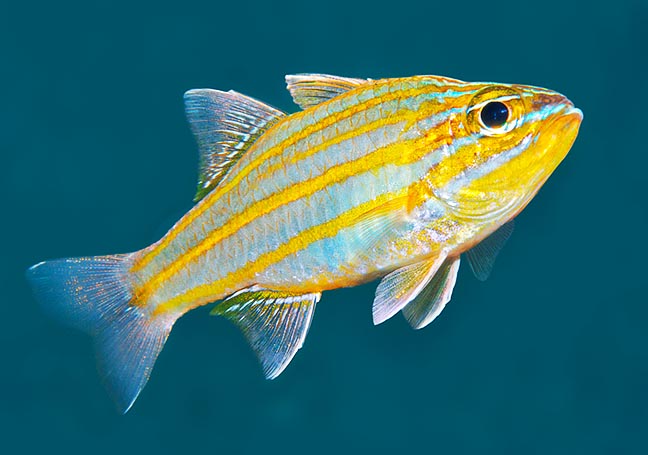 It lives in the madreporic formations, in the lagoons, and on the outer side of the reefs, up to 50 m of depth, even if usually it does not go down beyond the 15 m.

On the back, as is usual among the Apogonidae, we note two fins.

On the silvery light blue colour of the background, we note 6 yellow-orange horizontal stripes with more intense border, and also the iris and the fins show these decorations.

It is a quiet animal living in the shelter of the madrepores or among the long spines of the tropical sea urchins nourishing mainly of small crustaceans and larvae of fishes transported by the currents. The males collect the fecundated eggs and keep them in their mouth until when the hatching occurs. It has reproduced also in captivity, but it is not a frequent fish in the aquaria.

The populations are not affected by the degradation of the reefs caused by the climate changes and may double their number in less than 15 months. The vulnerability index of the species is very low: just 10 on a scale of 100.