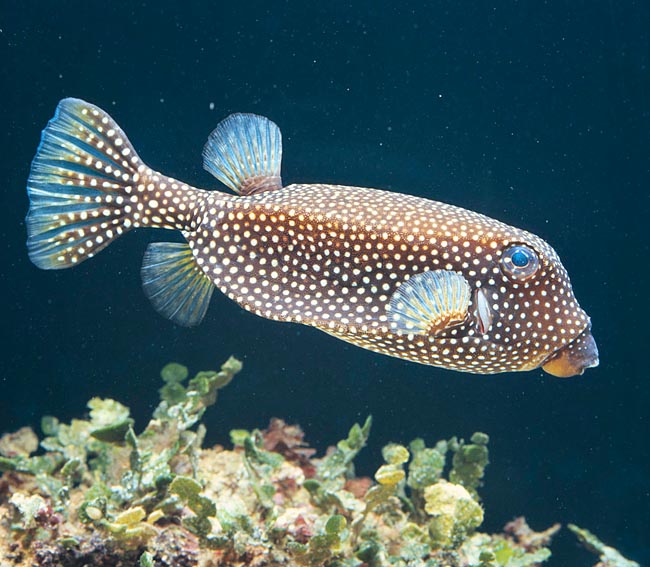 The Whitespotted boxfish (Ostracion meleagris Shaw, 1796) belongs to the class of Actinopterygii, the ray finned fishes, to the order of the Tetraodontiformes and to the family of the Ostraciidae, known as Coffer or Box fishes.

The name of the genus comes from the Greek “ostrakon” = shard, shell, with reference to the protecting under skin armour.

The species comes from the Latin “meleagris”, the name, which, after Pliny the Elder, Romans were giving to the guinea fowl, due to the colour and the white spotted pattern of the skin which evoke this bird, not by chance named by Linnaeus Numida meleagris.

It is present in the Indian Ocean and in the Pacific up to the Mexican coasts. We find it, as an indication, from South Africa and East Africa to the Seychelles, Maldives, India, Sri Lanka, Thailand, Australia, Indonesia, New Guinea, Micronesia, Philippines, Taiwan and China up to southern Japan which forms, along with the Hawaii, the northern limit of the species. Southwards, it reaches the New Caledonia, Tuamotu and Lord Howe.

It lives in the madreporic formations up to about 30 m of depth. Usually, the adults live in the outer part of the reefs, whilst the juveniles often find shelter between the long spines of the tropical sea urchins anchored to the rocks. 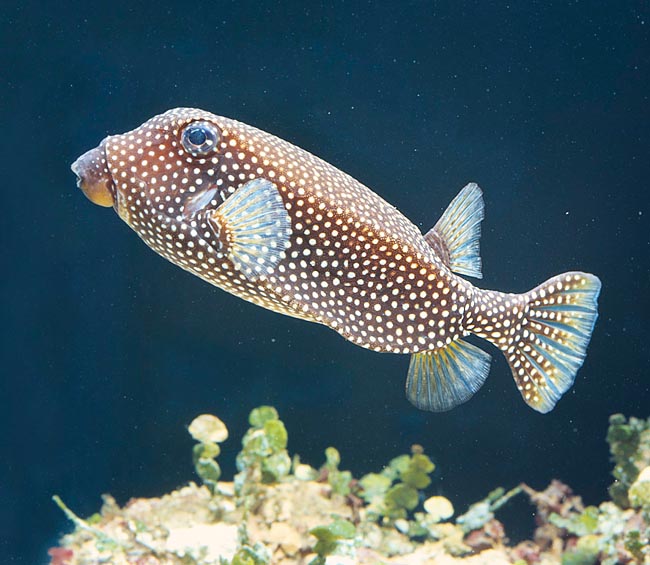 It has no foes as the skin emits a strong toxin, issued in high dosage when dying © Giuseppe Mazza

The juveniles and the females are dark brown with innumerable small white spots.

Slightly bigger than the females, they have a similar livery on the back, but the sides, the extremity of the head and the caudal fin are blue. Some orange yellow small spots, edged of black, emphasize this hue, and a golden band connects the eyes and isolates the back with a wavy demarcation line.

Just to complicate the things, we have to add that this is a protogynous hermaphrodite species. The females, starting from a certain size, may therefore transform into males with intermediate liveries.

Like Ostracion cubicus also the Ostracion meleagris has the skin covered by poisonous mucus, which however, in this case, is much stronger. If it dies in a small pool, the dosage is such to kill in short time all the other fishes and may aver dangerous also for the man.

The Whitespotted boxfish nourishes of sea-weeds, sponges, ascidians, crustaceans, molluscs and small worms, seized with its protractile mouth which can remove the bottom with powerful jets of water. Usually, adults live solitary. The males are more remarkable, but the females, especially in the reproductive period, stay around and form a small harem. At the moment of the fecundation, the male emits a characteristic low-pitched sound, which attracts them and induces them to spawn. The fecundated eggs are entrusted to the currents.

The populations can double in less than 15 months and seen that thanks to the strong poison they do not have predators, the vulnerability index of the species is very low: 13 per 100.