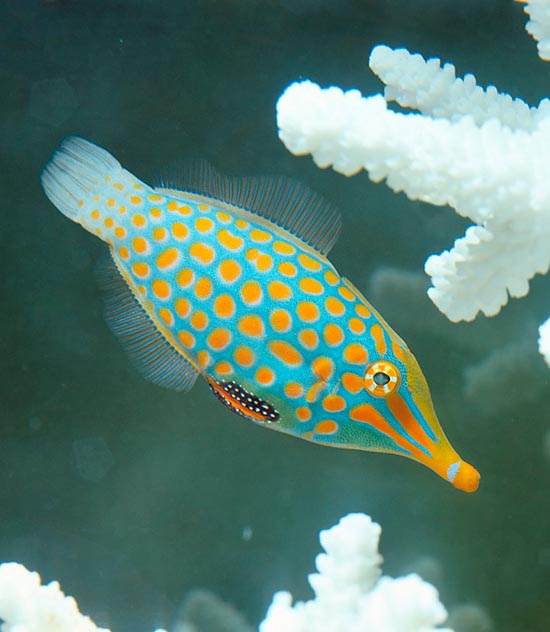 The colorful Harlequin filefish (Oxymonacanthus longirostris Bloch & Schneider, 1801) belongs to the class of Actinopterygii, the ray-finned fishes, to the multiform order of Tetraodontiformes and to the family of the Monacanthidae, the so-called “file-fishes” due to the roughness of their skin, covered, as in the Balistidae, by bony small plates.

The name of the genus comes from the Greek “oxys” = sharp, pointed, piercing + “monos” = sole, unique + “akantha” = spine, with reference to the big erectile defensive spine on the back.

Other consider more accurate the reference to “oxys” = sharp, pointed and “monacanthus”, the name of a fish genus belonging to the same family although with a rounder aspect such as Monacanthus ciliatus. “Monacanthus”, “only one spine”, comes however from “monos” = sole, onlyand “akantha” = spine, with reference to the only deffensive spine, standing on its back. In sum, it would be a Monacanthus with a pointed snout

The name of the species comes from the Latin “longus”= long and “rostrum” = beak, due to its elongated snout.

It is present in the tropical waters of the Indo-Pacific. We find it, as an indication, from Mozambique and East Africa to the Seychelles, Maldives, India, Sri Lanka, Thailand, Australia, Indonesia, New Guinea, Philippines, Taiwan and China up to the southern islands of Japan. Southwards, it reaches New Caledonia and Tonga, eastwards, Samoa.

In the Red Sea, this species has been replaced by the analogous Oxymonacanthus halli.

It lives in the madreporic formations, mostly in shallow waters, up to 30 m of depth.

The harlequin filefish does not exceed the 12 cm. The body is flat, ovoid-rhomboid with a long snout. On the back it has an erectile trigger formed, as happens in the Monacanthidae, by two spines, the second being so much reduced to be almost invisible. Normally, it is kept folded but the fish can snap it and block it in erect position, as is the case with the Balistidae, in case of aggression or strife. 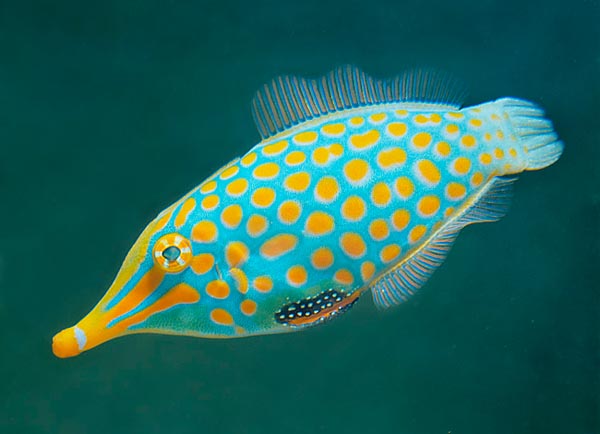 The pectoral fins count 11-13 unarmed rays and the ventral ones, atrophied, are practically inexistent, fuse in one orange spine, surrounded by a showy black spot with small white points. Also the caudal is more or less blunt, shaped like a paintbrush, and has at times a dark spot.

But what is more striking is the turquoise blue coloured background of the body, with showy orange spots, placed horizontally and fused in parallel lines at the height of the eye. Also the iris is camouflaged by 6 orange radial bands, alternated with analogous white ones.

The scales, small, are rough, like sandpaper, whence the common name of “filefish”, more scabrous, towards the tail, in the males.

The harlequin filefish is a monophagous species which nourishes only of polyps of the genus Acropora. It is therefore impossible to feed it in an aquarium. It lives in pair or in small schools, which often keep inclined, head down, at the base of the old corals.

The matings are preceded by an almost aggressive ritual. Then the two future spouses swim together looking for a tuft of sea-weeds suitable for spawning. Once this is chosen, the female rubs against it and the male caresses it at the right point with its scratchy scales. That is the signal for spawning and fecundating.

Even if it is at times stupidly fished for the home aquaria, it is not by sure an endangered species. The populations can double in 1,4-4,4 years and the vulnerability index is very low: 20 per 100.