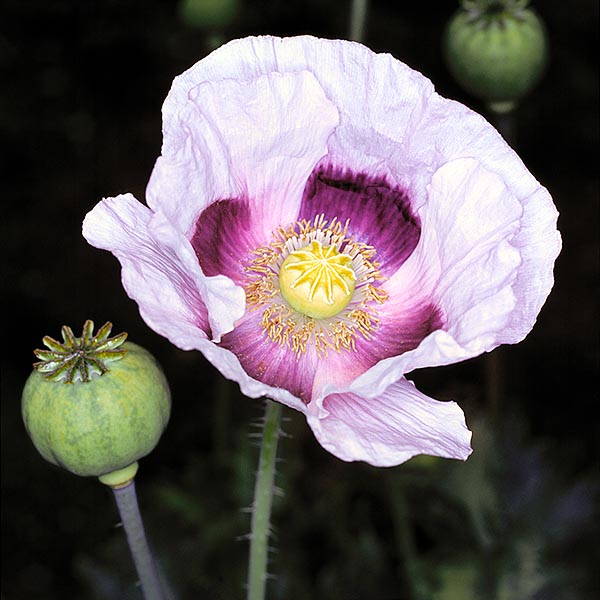 The genus Papaver includes about 125 species of the temperate and subtropical regions, more rarely of the alpine and cold of Europe, Asia, North America, Africa and Australia.

It includes perennial or annual herbaceous plants (16 are present in the European countries). In Europe and in Mediterranean basin, between Iran and the Pamir, origin zone of the cultivated wheat, most likely the poppies, weeds of crops, have been introduced with the seeds of these cereals (archaeophyte species) and linked to them, as for the well known Papaver rhoeas.

The Common garden poppy or Opium poppy (Papaver somniferum – L. 1753) is an entity of unsure origin, maybe native to Asia Minor (Turkey?) or derived by crop from the kindred Papaver setigerum (W-Medit.), with distribution range centred in the European countries bordering the Mediterranean, but now become cosmopolite and widely cultivated for the production of opium especially in the countries of Europe and south-eastern Asia (especially in India) and Asia Minor; in many other nations also as ornamental plant and for the seeds used for seasoning and from which they extract oil. Not infrequently goes wild in the calcareous, recently stirred and well exposed grounds, from the plain up to around the 1500 m above the sea level.

The name of the genus “papaver” comes from the Latin “papa” = pap (of the children), because in the old times they put the petals, or the juice or the seeds into the food for favouring the sleep of the young children. It can be also linked to “pap” = to open, the same which originates papule, bleb or to the Sanskrit term papavara, poisonous juice. The name of the species comes from the Latin terms “sómnium” = sleep and “féro” = I carry, referred to the narcotic properties of this species. It is an herbaceous plant with taproot, 20 to 140 cm tall with erect stem, simple or little ramose, robust, hollow, sub-glabrous and glaucous.

The leaves are green-light blue, the lower ones generally with short petiole, the cauline ones are alternate, ovate to lanceolate or oblong, 6-12 cm long, sessile, wavy, glaucous-waxy, cordate-amplexicaul, with deep and obtuse lobes along the margin. 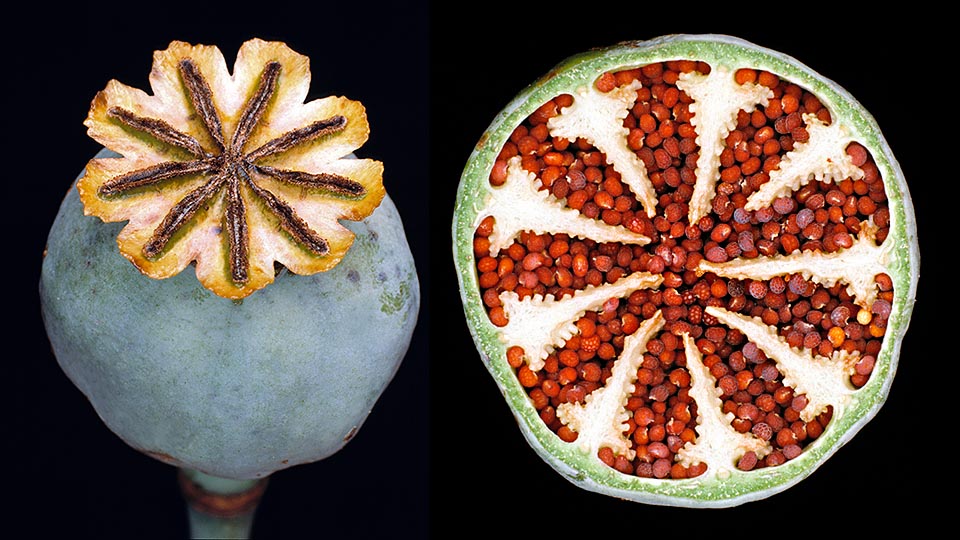 Fruit particular and section of same with seeds. They are many and are at times used in bread making, in pastry and in cuisine © Giuseppe Mazza

In Europe, the flowering takes place in May-June with terminal flowers on elongated peduncle initially carrying drooping buds (0,8 x 1,5-2 cm) with two deciduous sepals when flowering and four 2-3 x 5-7 cm petals, white, pink or violet spotted of dark at the base, and often lobate-eroded on the margin. The filaments of the numerous stamina are white, filiform or clavate carrying yellow, green or brown anthers; discoid stigma with 6-18 rays and capsule (pod) ovoid to sub-spherical, glabrous, 3-5 x 4-8 cm, which, when ripe contains numerous an tiny reniform seeds (0,8-1,5 mm) with reticulated-alveolate surface which remind the cap of the morels, of whitish colour (var. album diffused in India, Persia, China and Yugoslavia) or reddish and then, when ripe, dark blue-slate (var. nigrum the most diffused in Europe) in the cultivars. The fecundation is done by the insects (entomogamous) attracted by the colours and by the nectar of the flowers. 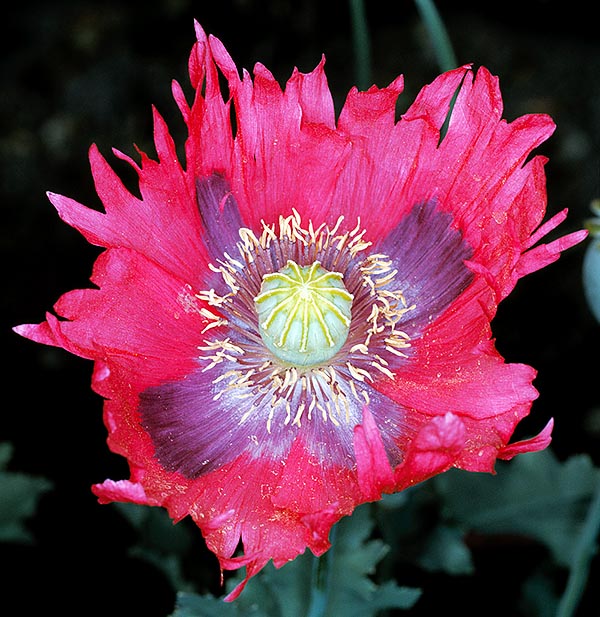 All the parts of the plant, if incised, exude a whitish latex, contained in laticiferous tubular vessels present in the mesocarp of the capsule, which quickly solidifies and darkens at the air and is known as opium; this contains more than thirty-five opium alkaloids, especially morphine (from 9 % to 17 %), codeine, thebaine, papaverine, narcine, narceine, laudanine, narcotine, noscapine, etc. besides resins, proteins, gums, sugars, salts, meconic acid and other organic acids and mucilage.

Given that the cultivation (apart few specimens of the ornamental or seed varieties), the detention and the use of the opium poppy and of its derivates is unlawful (in Italy, Law 685 dated 22/12/1975 articles 26 and 28) besides being very dangerous for the health, we remind that this is a plant with very bitter taste and unpleasant, characteristic, smell which has sedative, hypnotic and narcotic properties, depressing the bulbar centres, stupefacient, conferring it analgesic, antispastic, antispastic, anticough, sudorific and antidarrhoeic action.

The morphine, its main derivate, is a very strong analgesic which however creates addiction and is prescribed in medicine only in case of terminal diseases and other cases determining unbearable pains or for stopping violent diarrhoeas. It was Friedrich Wilhelm Sertürner (1783-1841) German pharmacologist and chemist, who, in 1806, in laboratory, isolated that “principium somniferum” which later on, n 1811, the same researcher described this alkaline substance calling it “morphium”, after Morpheus, the Greek god of the sleep.

The first documents testifying to the use of opium as analgesic date back over 5000 years ago, in the Sumerian civilization (Asia Minor and Middle East), but there are plausible hypotheses pushing back the employment of this plant to 8000 years ago. Later on, the opium was used by the Assyrians and by the Egyptians, followed by the Greeks and the Romans. Hippocrates and Galenus spread the knowledge of the analgesic properties describing various preparations. In the Middle Age such notions passed also to the Arabs who, later on, introduced it in India and then in China by around the IX century where it found employments as antidysenteric and it was only after the XVII century that it spread as voluptuous drug, and as such reached and diffused in Europe around the end of the XVII century. I will not dwell on this painful subject and on its consequences on the populations; I only quote a phrase of a Chinese physician who, in 1578, wrote: “The poppy produces a drug considered capable to cure, whilst it does kill like a sword”. 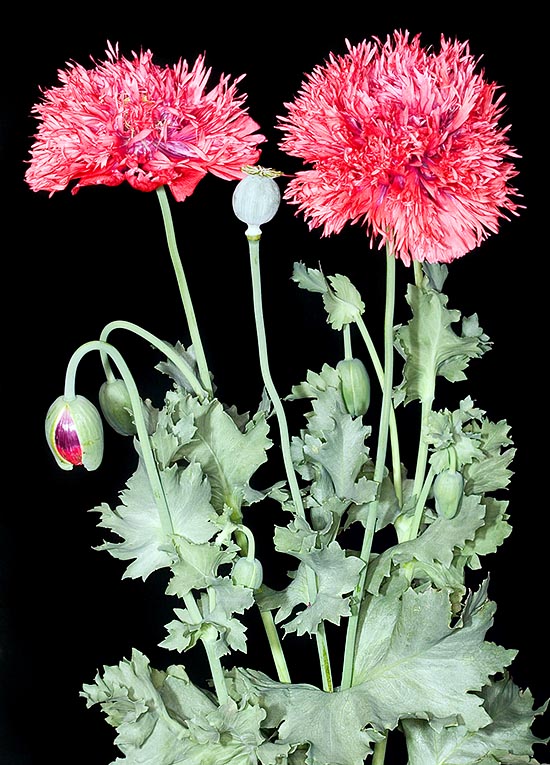 Symptoms of poisoning are the reddening of the face, dizziness, atony in general, weakening of the heartbeat, up to death due to heart failure.

Only the ripe seeds do not have alkaloids because they develop after that the plant has lost the potentiality of producing latex, and particularly those of the variety glabrum (cultivated also for the opium in Turkey) and nigrum are traditionally employed for aromatizing bread and traditional cakes, besides spicy meats and as decoration, especially in the Hebraic cuisine, in northern and eastern Europe and in the mountain and alpine zones.

From the cold pressing of the seeds they get odourless oil, rich of oleic and linolenic acid, with taste of almonds, of excellent quality and with emollient and soothing properties, from the remainder they get oil not suitable for consumption but which can be employed for balms, soaps and dyes.

The poppies should always occupy a sunny corner in the garden where they can express their beauty during the flowering.

The annual and biennial species are to be sown in autumn, between the end of September and early October, or in spring, between March and April on light, sandy, well drained soil, just covering the seeds with loam.

The perennial ones (Papaver orientale, Papaver bracteatum, etc.) are to be sown in April, in container or in cold greenhouse in small pots of peat of 4 cm of diameter. When sufficiently big, they are to be transplanted in vivarium and then planted in autumn or in the following spring.

Among the so-called poppies are also plants of different genera such as the Glaucium (corniculatus and luteum), the Eschscholtzia californica, besides the most known species of the genus Papaver such as Papaver alpinum, Papaver bracteautum, Papaver glaucum, Papaver nudicaule, Papaver orientale, Papaver rhoeas, etc.

Many are also the varieties of Papaver somniferum such as the ‘Carnation-Flowered’, the ‘Flore PLeno Laciniato’ and the ‘Pink Chiffon’ with double flowers and more or less laciniate petals.