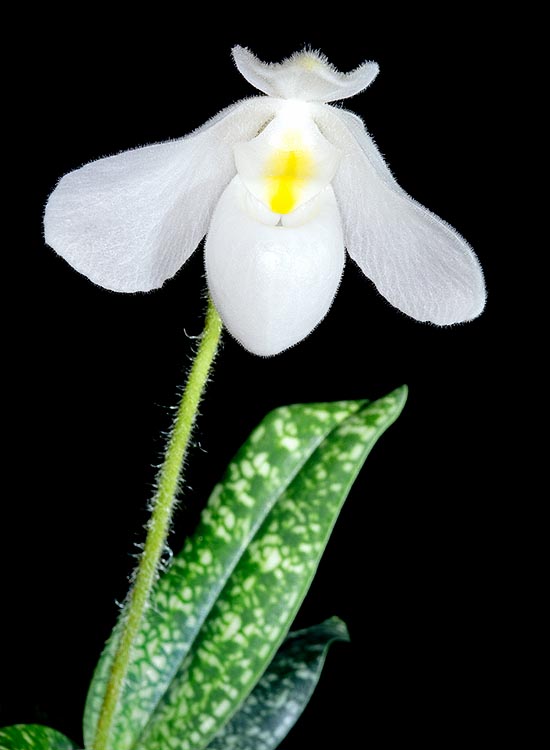 The species is native to south-eastern China (Guangxi and Yunnan) and of Vietnam where it grows on mountain slopes and crevices on granitic rocks, often close to water streams, between the 700 and 1300 m of altitude, in regions characterized by monsoonal climate.

The name of the genus is the combination of the Greek terms “Παφια” (Paphia), attribute of Aphrodite, and “πεδιλον” (pedilon) = sandal, with reference to the shape of the labellum; the species is honoured to Louis Delénat, curator oif the botanical gardens of Saint-Germain-en-Laye, Paris.

The Paphiopedilum delenatii Guillaumin (1924) is a terrestrial species with oblong-elliptic distichous leaves, 8-14 cm long and 3,5-4,5 cm broad, of pale green colour with dark green veins and mottles above and widely dotted of brown-purple below.

It reproduces by seed, in vitro, and by division, by the vegetative restart, with each section provided of at least 3-4 tufts.

Species among the most ornamental of the genus, for the delicate flowes as well as for the foliage, that has originated numerous hybrids. Of relatively easy cultivation, requires a semi-shaded position, medium-high temperatures in summer, 22-30 °C, cool in winter, with night lowest of 12-14 °C, with a daily thermal excursion of 5-6 °C to stimulate the blooming, high humidity, 70-85%, and constant movement of the air. Regular and abundant waterings in summer-autumn, but allowing the substratum to partially dry up before watering again, preferably in the first hours of the day and avoiding stagnations at the axil of the leaves that may cause rottenness, spaced in winter-spring, but without ever drying up completely the substratum, in fact in nature this period is characterized by poor rainfall, but with persistent mists and fogs that contribute in keeping humid the soil. 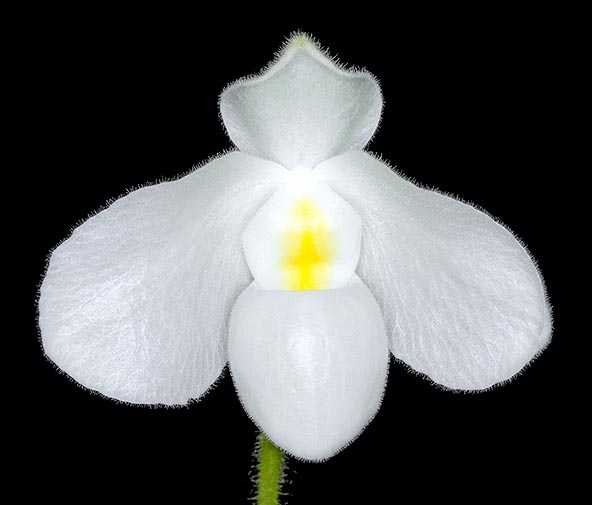 Elegant leaves and flower of 6-8, cm of diameter, slightly scented. Almost extinct in nature, this species is conversely present in the nurseries, often sided by his numerous beautiful hybrids © Giuseppe Mazza

For the waterings and the nebulizations is to be used rain water, by reverse osmosis or demineralized, for the fertilizations, during the vegetative period, a hydrosoluble balanced product, with microelements, at ¼ or less ot the dosage suggested. It is cultivated in pot with particularly draining and slightly acidic substratum that can be formed by 70% of medium sliced bark fragments, 20% of charcoal and 10% of sphagnum. The repottings are to be done, when the substratum has decomposed, by the end of the blooming.

Due to the indiscriminate harvesting and the excessive anthropization, the population has reduced considerably during the last years of the XX century, with few individuals present in China (Guangxi and Yunnan) and in Vietnam, so much to be inserted in the red list of the IUCN (International Union for the Conservation of Nature and Natural Resources) as “Critically Endangered” (at very high risk of extinction in nature in the immediate future).

The species is reported in the appendix I of CITES (species at risk of extinction whose trade is admitted only in exceptional cases).