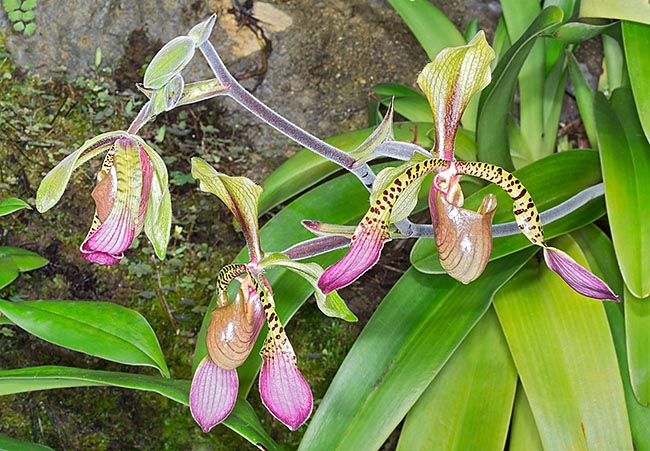 The species is native to Borneo, Java, Peninsular Malaysia, Singapore, Sulawesi and Sumatra, where it usually grows as epiphytic on the trees of the pluvial forests, but at times as lithophytic in cavities of calcareous rocks full of humus, between the 300 and the 1600 m of altitude.

The name of the genus is the combination of the Greek terms “paphia” = attribute of Aphrodite, and “pédilon” = sandal, with reference to the shape of the labellum; the species is honoured to Hugh Low (1824-1905), English naturalist and administrator in the Peninsular Malaysia, who discovered the species in Sarawak (Borneo).

Erect or arcuate terminal inflorescence, 0,6-1 m long, carrying 2-7 flowers of 10-15 cm of diameter, opening in succession. Ovate to elliptic dorsal sepal with pointed apex, 4-5 cm long and 2,5-3 cm broad, concave above, with retroflexed margins below, of greenish yellow colour suffused and tinged of brown purple at the base, lateral sepals merged to form a unique sepal (synsepalous) behind the labellum, greenish yellow, 4-5 cm long and 2 cm broad, spatulate petals initially horizontal, then drooping and twisted, 6-9 cm long and 1,5-2 cm broad, of greenish yellow colour with blackish brown spots and suffused of purple at the apex, saccate labellum, 3,5-4 cm long, of greenish colour suffused of brown with darker streaks.

It reproduces by seed, in vitro, and by division, at the vegetative restart, with each section equipped with at least 3-4 tufts. 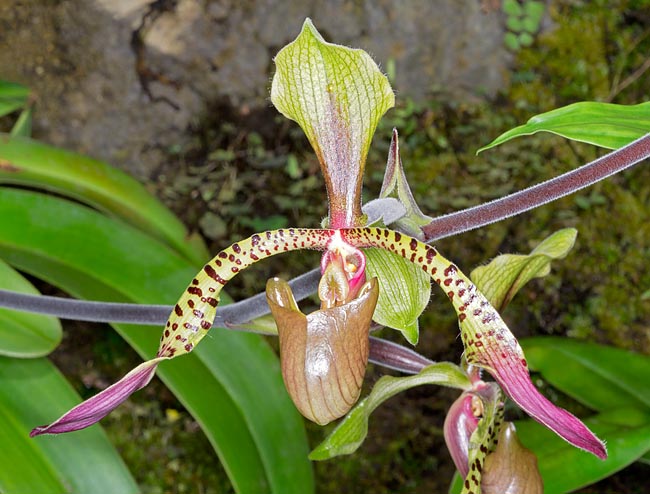 Little cultivated it has even 1 m long inflorescences, with 2-7 flowers of 10-15 cm of diameter © Giuseppe Mazza

Relatively little diffused in cultivation species, in spite of the undoubted ornamental characteristics of the long lasting, 1-2 months, flowers, requires high luminosity, even some hours if direct sun in the morning, medium high temperatures, with winter diurnal values of 18-20 °C and lowest night ones not under the 12 °C, high humidity, 60-70%, and a good, constant ventilation.

The cultivation substratum, much aerated and draining, can be formed by medium sliced bark fragments, charcoal and agri-perlite.

The watering must be regular and abundant in summer, preferably in the first hours of the day thus to allow the water to dry up in order to avoid stagnations at the axil of the leaves which may cause rottenness, more spaced in winter, but without ever allow the substratum to dry up completely.

The watering and the nebulisations are to be done with rain water, by reverse or demineralised osmosis, and the fertilizations, during the vegetative period, with hydro soluble balanced products, with microelements, at ¼ of dosage, or less, than what suggested on the package, distributed and alternated in way to avoid salts accumulation to the roots. Divisions and repotting are to be done by the end of blooming, trying to damage the least possible the rooting apparatus.

The species is listed in the appendix I of the CITES (endangered species whose trade is admitted only in exceptional circumstances).