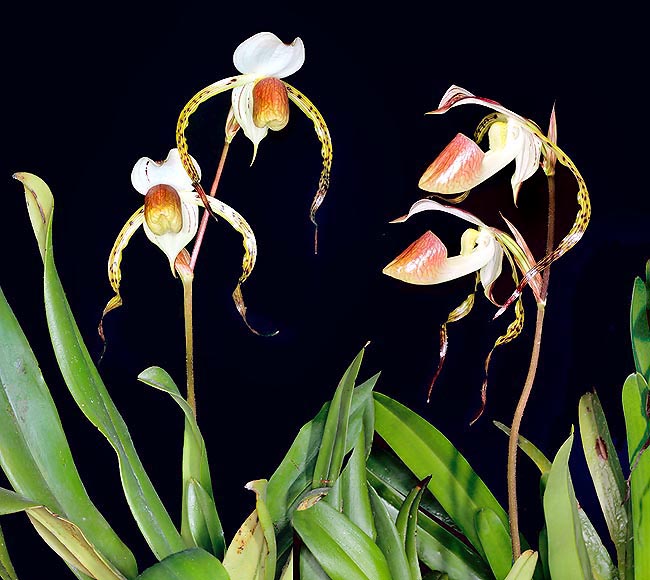 The Paphiopedilum stonei grows slowly. From seed, it takes even 12 years for flowering © Giuseppe Mazza

The species is native to Borneo, where it grows on calcareous slopes up to about 500 m of altitude.

The name of the genus is the combination of the Greek terms “paphia” , attribute of Aphrodite, and “pédilon” = sandal, with reference to the shape of the labellum; the species is honoured to the gardener, Robert Stone, of the English collector John Day, in whose greenhouse it did bloom for the first time in Europe.

The sepals are cordate (the two lateral ones are united forming one only sepal, called “synsepalous”, behind the labellum), 4,5-6 cm long and 3-4 cm broad, with pointed apex; the petals, curved downwards, are linear, 13-15 cm long and 0,6-0,8 cm broad; the labellum, saccate, is up to about 6 cm long and 2,5 cm broad. It reproduces by seed, in vitro, and by division with each section provided of at least 3-4 tufts.

Species standing among the most beautiful of the genus, with rather low growth, it takes up to 12 years to reach the flowering from the seed, considered as unsuitable for those beginning the cultivation of this genus, it requires high luminosity, but not direct sun, medium-high temperatures, with night lowest, in winter, of not less than 15 °C, high humidity, 70-80% and a constant ventilation.

The waterings must be regular and abundant, avoiding stagnations at the axil of the leaves which might generate rottenness, with a slight reduction in winter, but with never leaving the roots to dry up completely. The waterings and nebulisations are to be done with rain water, or water obtained by reverse osmosis, or demineralised, and the fertilizations, during the vegetative period, with hydro-soluble balanced products, with microelements, at ¼ of the dosage, or less, of what suggested on the package, distributed and alternated in way to avoid salts accumulation at the roots, to which this species is quite sensitive.

The cultivation substratum may be formed by medium sliced bark fragments, charcoal and agri-perlite with addition of crushed limestone; divisions and repottings are to be done by the end of the flowering, having care to damage the least possible, the rooting apparatus.