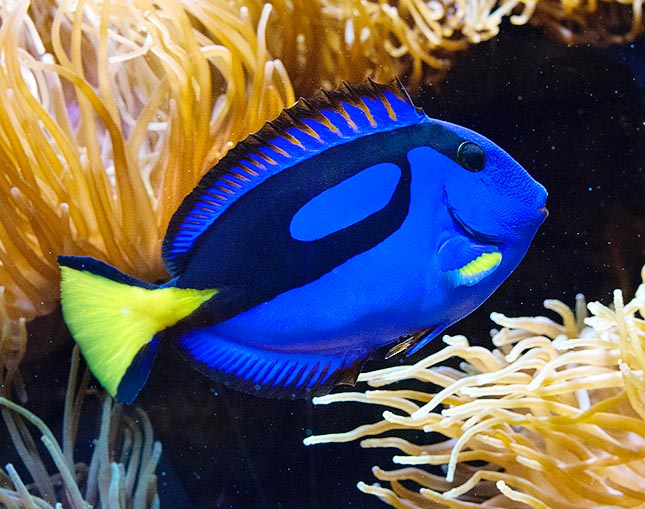 The Blue surgeonfish (Paracanthurus hepatus Linnaeus, 1766), belongs to the class of Actinopterygii, the ray-finned fishes, to the order of Perciformes and to the colourful tropical family of Acanthuridae.

The name of the genus “paracanthurus”, comes from the Greek “para” = near, and “anthurus”, the name of a well known genus of fishes belonging to the same zoological family.

In short, it is a surgeonfish with its cutting blade on the caudal peduncle, as the name “acanthurus” states, as this one comes from the Greek “akantha” = spine, and “ura” = tail.

The name of the species “hepatus”, comes from the Greek “hepar” = liver, and therefore, in Latin, “having the colour of the liver”, this due to a trivial mistake made by Linnaeus.

When he described the fish, in fact, the father of the zoological classification had in front of him a dead specimen, conserved, where the splendid blue had become reddish, like the liver. 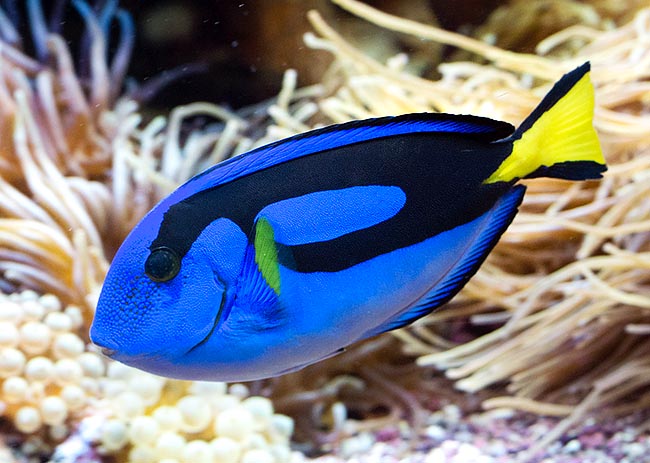 The caudal peduncle cutting blade is poisoned; the pattern is a warning to importunators © Giuseppe Mazza

The blue surgeonfish has a very vast distribution in the tropical waters of the Indian Ocean, starting from South Africa, excluding the Red Sea, and of the Pacific Ocean, Japan included, but does not reach the American coasts. The colonization stops at the Kiribati, Samoa and Tonga Islands.

It lives in the madreporic formations in a few metres of water, but also on the precipices of the reefs up to 40 m of depth.

The juveniles take often shelter in the caespitose ramifications of Pocillopora eydouxi or of the Acropora.

A safe remedy against the big predators, but by sure not against the man. To the fishermen, who are chasing them ruthlessly for the aquaria trade, it is sufficient, in fact, to take off these madrepores and place them, under water, in a plastic bag. Later on, the fishes will be calmly recovered, wit a double environmental damage. 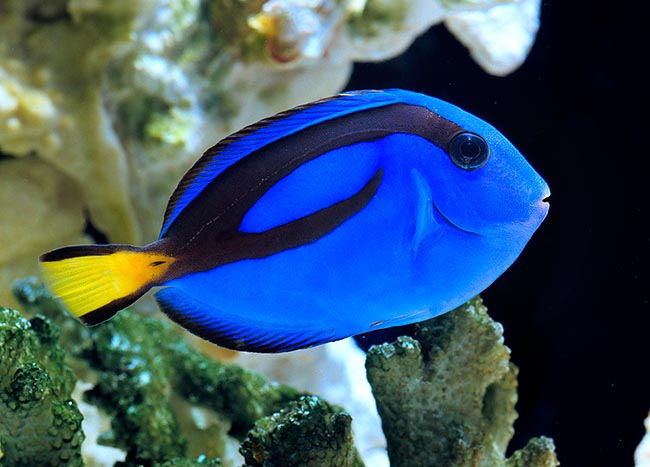 It can reach the 31 cm, but its average size stays by around the 20 cm.

The cutting blade of the caudal peduncle is connected to a poison gland, underlined by the yellow triangle which starts from the tail and then connects to the black drawing which crosses the body hiding the eye. All the rest is of a shining blue, but in some rare individual, coming from certain areas, the belly is yellow. The mouth is small, provided of tiny teeth placed on the jaws. Some of them are fine, curved, others, wider with serrated edge. 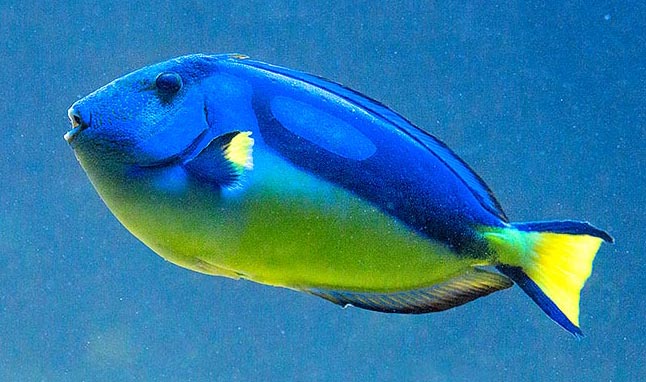 The blue surgeonfish usually swims in small groups of 5-6 individuals. The juveniles nourish exclusively of zooplankton, the adults also of some seaweeds. The reproduction takes place with pelagic eggs, and the newborns have a lifespan of 20 years.

Even if the species is much fished for the aquaria and is getting rare in some zones, the vulnerability is, luckily, still low: 28 per 100, thanks to a possible doubling of the populations in 15 months only.