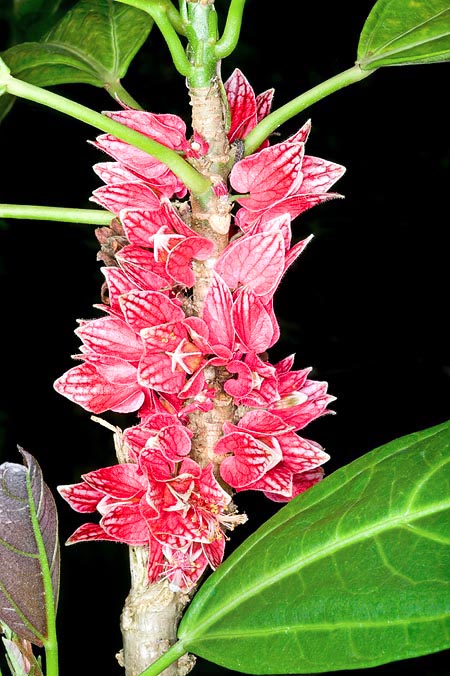 This species is native to Brazil (Bahia), where it lives in the coastal pluvial forests.

The genus is honoured to the Spanish explorer and botanist José Antonio Pavón Jiménez (1754-1840); the name of the species is the combination of the Latin words “strictus” = narrow, serrate and “flos, -oris” = flower, with possible reference to the tight flowers.

The Pavonia strictiflora (Hook.) Fryxell (1999) is an evergreen shrub, 1,5 m tall, with erect branches and deep green leaves, alternate, ovate, with sharp apex and slightly and irregularly toothed margins in the second half, 12-20 cm long and 5-10 cm broad.

The flowers, solitary or grouped, come out at the axilla of the leaves on an about 1 cm long peduncle and are formed by the epicalyx (involucre of bracts similar to sepals placed under the calyx, typical of the Malvaceae) with four upright, ovate-triangular lobes, about 2 cm long and 1 cm broad, of yellowish white colour suffused and veined with purple red, which persist also after the withering of the flowers.

Almost hidden by the epicalyx, which is the most conspicuous part of the flower, are found the calyx, 0,8 cm long, with five sharp lobes, and the corolla with five petals, 0,8 cm long too, united at the base to the staminal column, shorter than the calyx.

The fruit is capsule containing reniform seeds. It reproduces by seed in sandy soil, kept humid, at the temperature of 22-24 °C, and by cutting in spring-summer.

Species with the particular and odd disposition of the flowers, produced in abundance along the branches, so much to cover them almost entirely, cultivable in the tropical and subtropical zones, as it does not stand temperatures just under the 0 °C, in filtered sunlight as well in shade or semi-shade.

It requires a light substratum, rich of organic substance, neutral or acidic, constantly kept humid and a high ambient humidity and is cultivable also in pot with the same modalities. It is easily subject to scale insects attacks, and therefore is to be kept controlled on a periodical basis in order to be able to quickly take action.