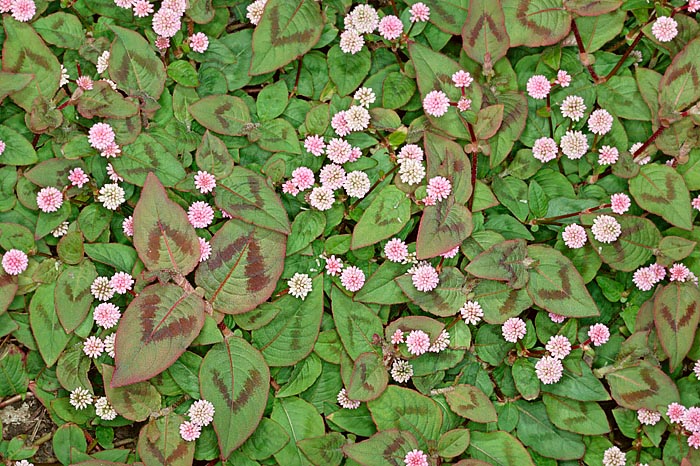 The species is native to Bhutan, China (Guangdong, Guangxi, Guizhou, Hubei, Hunan, Jiangxi, Sichuan, Xizang and Yunnan), India, Malaysia, Myanmar, Nepal, Sri Lanka, Thailand and Vietnam, where it grows on rocky soils up to about 2500 m of altitude.

The Persicaria capitata (Buch.-Ham. ex D.Don) H.Gross (1913) is a perennial herbaceous species with woody base, evergreen, 5-30 cm tall, much ramified with brown or reddish purple branches, 15-25 cm long, creeping and rooting at the nodes. The leaves, on a 0,3-0,6 cm long petiole, are ovate with serrate, hairy margins, and pointed apex, 1,3-5 cm long and 0,6-2 cm broad, pubescent, of green colour at times with V-shaped variegation of a darker green colour or red, pink or bronze. 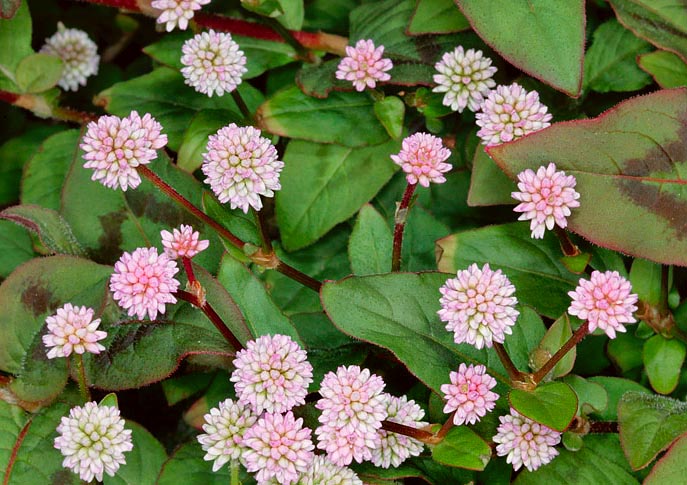 The inflorescences are dense terminal heads of 0,7-1,5 cm of diameter, on a 1-4 cm long peduncle, with several tiny flowers of about 1 mm of diameter, with 5 oblanceolate tepals 1-2 mm long, greenish white at the base, pink at the apex, and 8 stamina with pink to red anthers. The fruit is a trigonal achene, 1-2 m long, of glossy dark brown colour.

It easily reproduces by seed, shallowly placed in light loam, which germinates in 3-6 weeks at the temperature of 20-22 °C, by division and by cutting. Vigorous species of easy cultivation and little maintenance which quickly expands thanks to the branches rooting easily at the nodes, ideal for covering embankments and slopes with its variegated leaves and the crowd of inflorescences produced from spring to autumn.

Cultivable in the tropical, subtro- pical and warm temperate climate zones, in cooler climates it behaves as deciduous or as annual, thanks to the facility with which it auto-disseminates, so much to become invading under favourable climate conditions. It requires full sun in order to bring out the variegations, but it grows well also in shaded position and, well rooted, it may stand periods of dry. It is cultivable also in pot, as drooping, in draining loam rich of organic substance. The leaves are utilized in the traditional medicine for various pathologies.

→ To appreciate the biodiversity within the POLYGONACEAE family please click here.