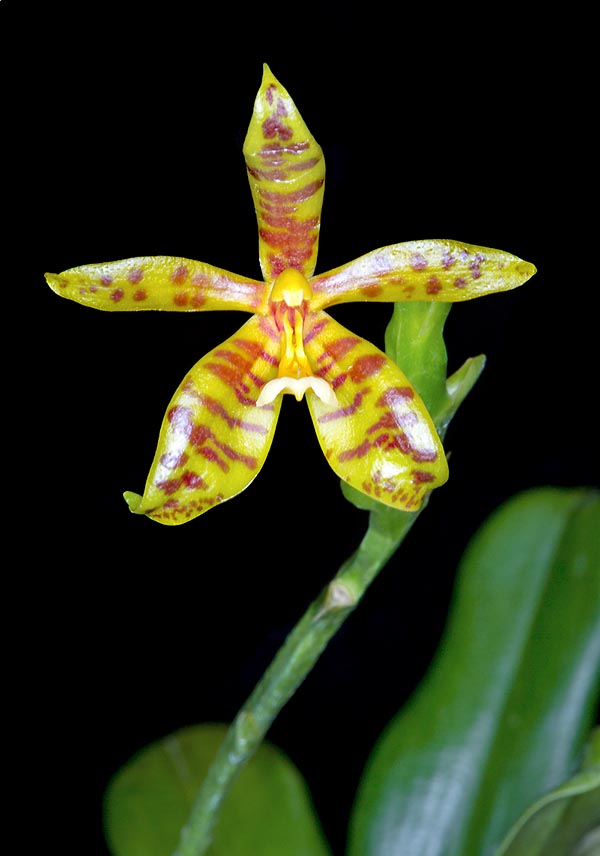 Easy to cultivate, Phalaenopsis cornu-cervi is a much floriferous small orchid © G. Mazza

The species is native to south-eastern Asia (Bangladesh, Borneo, Laos, Malaysia, Myanmar, Nicobar Islands, Philippines, Sumatra, Thailand and Vietnam), where it grows, epiphytic, in open areas as well as in the forests up to about 800 m of altitude, in zones with markedly seasonal climate.

The name of the genus is the combination of the Greek terms “phalaina” = butterfly and “opsis” = appearance, with obvious rederence; the name of the species is the union of the Latin terms “cornu” = antler and “cervus,i” = deer, therefore deer antlers, with reference to the shape of the floral stalk.

The Phalaenopsis cornu-cervi (Breda) Blume & Rchb.f. (1860) is an epiphytic species with short rhizomatous stem completely surrounded by the imbricate foliar bases and 4-5 fleshy leaves, from oblong to lanceolate, 10-20 cm long and 2-4 cm broad, of intense green colour, possibly deciduous in the wild during the dry season in the more exposed situations.

Curved lateral inflorescences, racemose or paniculate, 10-40 cm long, carrying, on a compressed and winged rachis with close and flattened distichous bracts, several waxy flowers, of 3-5 cm of diameter, usually yellow or greenish yellow with brown red spots, but the trilobed labellum, white with lateral lobes run by brown red parallel bands; there is also an albino form having no spots and coloured bands (please see photo). Sepals from elliptic to oblanceolate with pointed apex, 1,6-2,2 cm long and 0,6-0,8 cm broad, petals having similar shape, 0,7-1,8 cm long and about 0,5 cm broad, 1,8 cm long and 0,8 cm broad labellum with erect lateral lobes, oblong and truncated at the apex, and anchor-shaped median lobe, arcuate column 0,8 cm long. It reproduces by seed, in vitro, and by micropropagation.

Relatively easy to cultivate, it is a much floriferous small orchid, with slightly scented and long-lasting flowers which open in succession for several months, with the progressive elongation of the inflorescence which goes on also for several years, this is therefore not to be cut but when withered.

It requires medium-high temperatures with lowest values in winter not under the 14 °C, high humidity, 60-80%, with good and constant ventilation; it adapts to different situations of light, from semi-shaded to very luminous, which, however, are to be preferred. In summer, the waterings must be regular and abundant, in winter, when the growth of the leaves has stopped, they are to be reduced but with allowing drying up completely; the stagnations at the axil of the leaves are to be avoided, especially by night and with medium-low temperatures, in order to avoid easy rottenness.

For the waterings and the nebulisations is to be used rainwater, or water obtained by reverse osmosis, or demineralised; the fertilizations, duly distributed and alternated, in way t o avoid salts accumulation at the roots, to which it is particularly sensitive, are to be done during the vegetative period preferably with hydro-soluble balanced products, with microelements, at ¼ of the dosage suggested on the package. 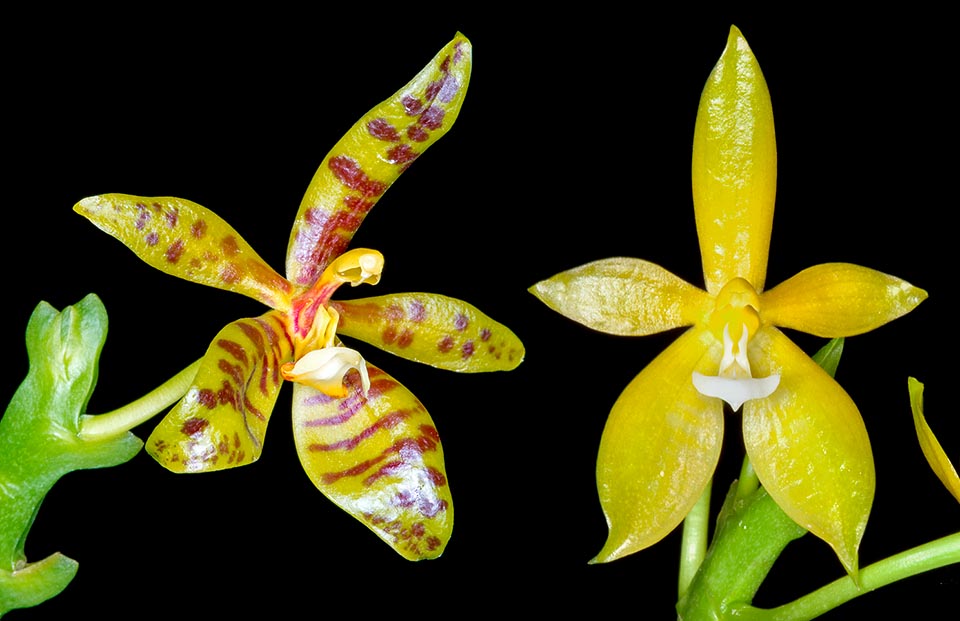 Normal form and albino with no stripes and spots. It adapts to various light situations, but needs medium-high temperatures, high humidity and constant ventilation © Giuseppe Mazza

It can be mounted on trunks, bark, cork raft, or cultivated in pots, also hanging, with very draining and aerated compost which may be formed by medium sliced bark fragments, with possible addition of inerts in order to improve the drainage.