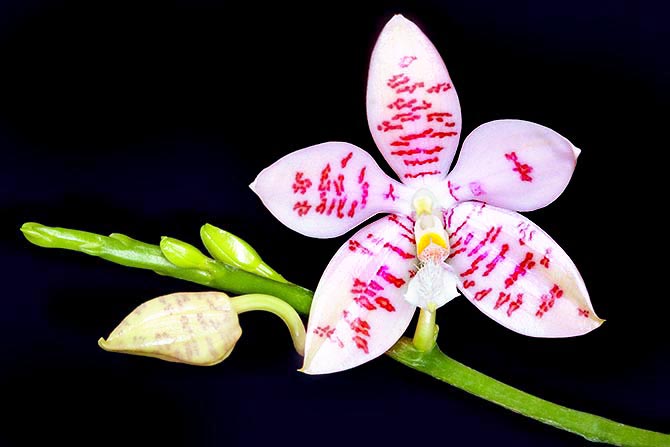 The Phalaenopsis lueddemanniana is very spread among botanical orchids collectors as easy to cultivate © G. Mazza

The species is native to Philippines, where it grows in the humid forests at low altitudes.

The name of the genus is the combination of the Greek terms “phalaina” = butterfly and “opsis” = appearance, with obvious reference; the species is honoured to the French botanist and orchid grower G.A. Lüddeman (1821-1884).

Phalaenopsis lueddemanniana Rchb.f. (1865) is an epiphytic species with the stem covered by the imbricate foliar bases and oblong-elliptic fleshy leaves, 10-30 cm long and up to 9 cm broad. The inflorescence is lateral and up to 50 cm long, arcuate or hanging, racemose or paniculate, carrying 2-5 flowers open at the same time, waxy, fleshy and slightly scented, of 5-6 cm of diameter, long-lasting, up to 8 weeks.

The flowers are quite variable as per shape and, especially, per colour, more frequently, the sepals and the petals are whitish with more or less thick magenta, purple or reddish brown stripes, of various tonality, and trilobed labellum with yellow dot at the base and on the lateral lobes and purple pink central lobe. The sepals are more or less elliptic, 2-3 cm long and 1-1,4 cm broad, keeled on the back, the petals, ovate-elliptic, 2,6 cm long and 1,2 cm broad, the labellum, 1,8-2,2 cm long and 1,5-1,8 cm broad, has the oblong lateral lobes truncated at the apex, erect, and median lobe ovate-oblong, fleshy, with a crest along the median line provided with white shaggy bristles, the column is cylindrical, slightly arcuate, about 1 cm long.

It reproduces by seed, in vitro, by micropropagation and, amateurishly, through the young plants which easily form on the inflorescence (in jargon, “keiki”, which, in Hawaiian, means “sons”), that can be removed once they have formed a good rooting apparatus.

Amongst the botanical Phalaenopsis, it is one of the diffused at the collectors, also for the facility of cultivation and of reproduction through the keiki produced by the inflorescence, therefore this one is to be cut only when withered. It requires medium-high temperatures with winter lowest never under the 14 °C, high humidity, 60-80% and partial shade, but also with some hours of direct sun in the morning.

In spring-summer, during the vegetative period, the waterings must be regular and abundant, but allowing the substratum to partially dry up before watering again, slightly reduced in winter, in way to grant the plant a slight period of rest, avoid the stagnations at the axil of the leaves, especially by night and with medium-low temperatures; a constant, good ventilation is fundamental for preventing the rottenness. For the waterings and the nebulisations, it is to be utilized rainwater, or water obtained by reverse osmosis, or demineralised; the fertilizations, dully distributed and alternated, in way to avoid salts accumulation at the roots, are to be done during the vegetative period preferably with hydro-soluble balanced products, with microelements, at ¼ of the dosage suggested on the package. It can be mounted on trunks, bark, cork raft or cultivated in pots or baskets, preferably suspended, with much draining and aerated compost which may be formed by medium sliced bark fragments, with possible addition of inerts for improving the drainage. Possible repottings are to be done in spring by the vegetative restart, announced by the growth of the new roots.