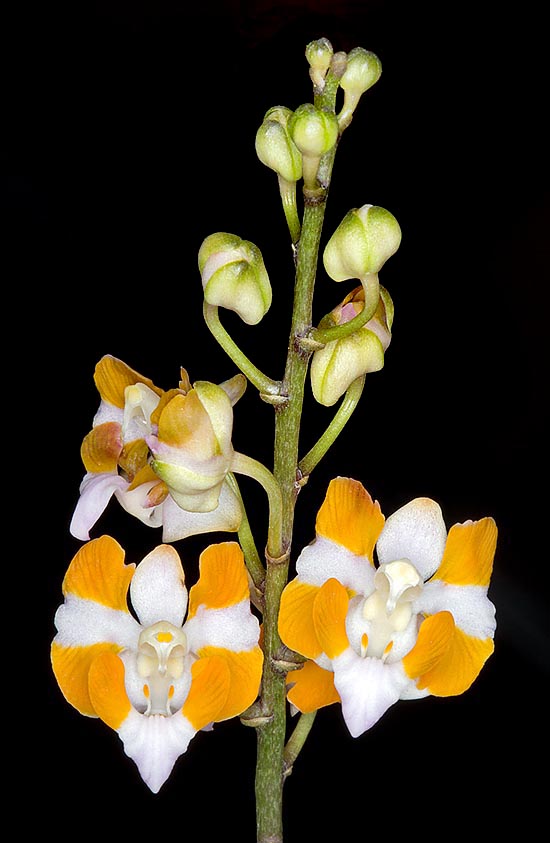 Peloric form of Phalaenopsis pulcherrima. This species is at home in south-eastern Asia © Mazza

The species is native to Assam, Borneo, Cambodia, China (Hainan), Laos, Myanmar, Peninsular Malaysia, Singapore, Sumatra, Thailand and Vietnam where it grows in the forests and in the thickets on sandy or rocky soils, covered or not with moss, along the banks of water streams or in open areas along the coasts, from the sea level up to about 1200 m of altitude.

The name of the genus is the combination of the Greek substantives “φάλαινα” (phalaina) = butterfly and “ὄψις” (opsis) = look, with obvious reference; the name of the species is the Latin adjective “pulcherrimus, a, um” (superlative of “pulcher”) = most beautiful.

The Phalaenopsis pulcherrima (Lindl.) J.J.Sm. (1933) is a terrestrial or lithophytic species, much variable per colour and size of the flowers, with short stem provided of 3-6 leaves, oblong to lanceolate, distichous, coraceous, rigid, 5-15 cm long and 1,5-3 cm broad, of green colour often suffused with purple, especially in the lower page.

Lateral inflorescence, on 20-40 cm long peduncle, racemose, 10-25 cm long, with numerous flowers, of 2-3,5 cm of diameter, spirally arranged on the rachis, opening in succession for a period of 1-3 months, usually with petals and sepals of pink to purple colour, in various shades, and labellum with reddish lateral lobes and dark purple median lobe run at the base by white lines; there are variants of white colour, or white with yellow lateral lobes of the labellum, and of blue violets colour in various tonalities.

There are also peloric forms (see photo) characterized for having the petals nearly equal to the labellum per shape and colour, the flower therefore passes from the bilateral symmetry (zygomorphic), typical of the orchids, to the radial symmetry (actinomorphic).

Once blooming is finished, the part of the floral stem under the first node which has carried the flowers is to be left, unless it is not completely dry, as it will be emitted, even if at a distance of time, a new stem from the lower nodes. 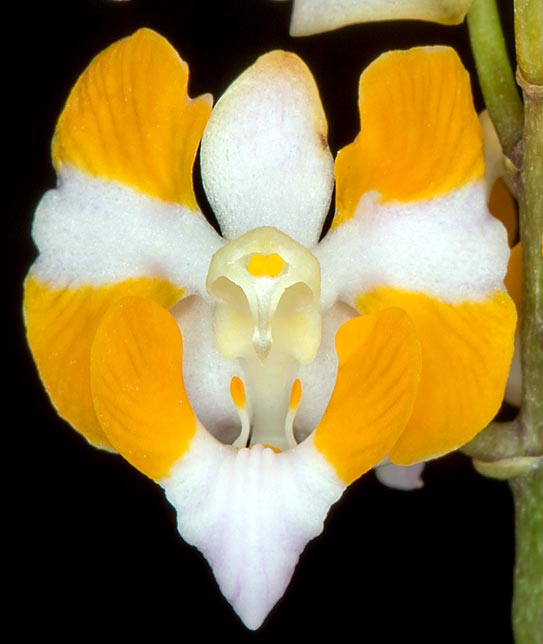 In the peloric mutation the petals are nearly equal to the labellum as size and colour. The flower therefore goes from the bilateral symmetry, typical of orchids,to the radial one © G. Mazza

It reproduces by seed, in vitro, by micropropagation and easily through the young plants forming at the base and on the inflorescence (in jargon “keiki”, meaning in Hawaiian “sons”); that can be removed when they have formed a good rooting apparatus. Species diffused in the wild of easy cultivation and adaptability, amply utilized in the hybridizations, requires high luminosity, also some hours of direct sun, medium-high temperatures, 18-32 °C, with lowest night ones during the coldest months not less than 16 °C, high humidity, 60-80%, and constant ventilation.

During the period of active growth the waterings must be abundant and regular but leaving to dry up before giving water again, more spaced when the temperatures are lower and the growth slowed down; to avoid stagnations at the axil of the leaves, especially by night and with medium-low temperatures, which may cause rottenness. The waterings and the nebulisations must be done using rainwater, demineralised of form reverse osmosis; the fertilizations, duly alternated to avoid excessive accumulations of salts in the compost, are to be done during the growth period with hydrosoluble balanced products, with microelements, at ¼ of the dosage suggested by the producer. It is preferably cultivated in low jars of clay with perfectly draining compost that can be formed by fragments of earthenware and medium sliced pieces of charcoal or bark, with possible addition of sphagnum, less frequently is mounted on pieces of bark, trunks, rafts of cork or of arborescent ferns. Transplants and repottings are to be done at the end of the blooming by the appearing of the new roots.