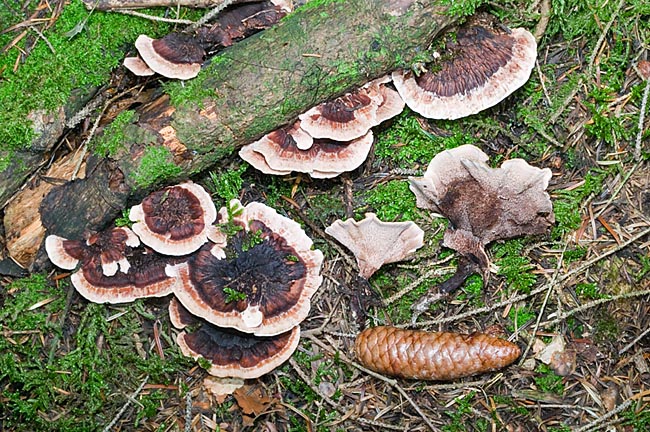 The etymology of the species comes from the Latin “tomentosus” which means “fluffy, velvety”, due to the surface of the cap.

The are no “common” names for this species in Italy, in Spain and in France; in Germany it is known with the names of “Becherförmiger, Duftstacheling, “Dennestekelzwam”; in the United Kingdom “Woolly Tooth” and in USA, “Funnel Tooth”.

To this genus belong stipitate, terricolous basidiomes, with aculeate and elastic hymenophore; the flesh is suberic and zonate, with smell similar to the beef broth in the dried specimens; monomitic hyphal system, without clamp connections, acystidiate, the basidia are tetrasporic, the basidiospores are white in mass, inamyloid, sub-globose, slightly echinulate and without germinative pore. All species are saprotrophic. Species typus: Phellodon niger (Fries) P. Karsten 1881. 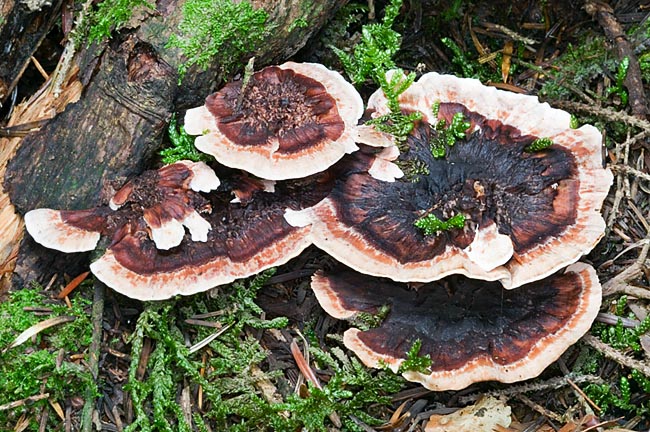 The inedible cap reaches the 6 cm, often merging with the nearby ones © Giuseppe Mazza

Cap: the cap measures 2-6 cm, often merged with nearby specimens, connate, flat or depressed at the centre, initially velvety and felted, then fibrous-scaly, white-grey-brownish when young, then brown-yellowish, whitish in the marginal parts, concentrically zoned.
Hymenium: spines of grey colour, very thick and short (2mm), decurrent to the stem.

Stem: the stalk is brownish, more or less felty, irregular, can reach the 3-4 cm of length and less than 1 cm of thickness.

Habitat: grows in the coniferous and mixed woods, most frequently under the Norway spruce.

Edibility: of no value.

Reactions: the context does not become green, or reacts very feebly, with KOH, reaction which, on the contrary, takes place in Phellodon niger. 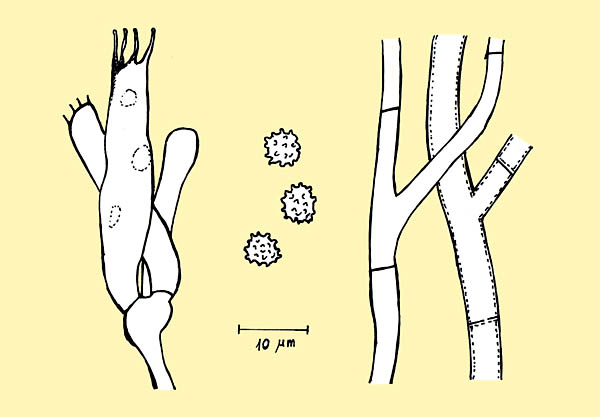 Remarks.This hydnaceous is diffused and common all over Europe and North America, where are present woods of conifers, it presents almost always as accreted; the colour is almost white when young turning, when adult, very dark, maintaining always the spines clear. A similar species is Phellodon confluens (Persoon) Pouzar 1956, which has an azoned cap and grows mainly under broad leaved trees, same poor reaction to the KOH, slightly bigger spores. The closest genus is Hydnellum with often floury smell when cut, but especially brownish spore print with amply ellipsoidal and warty basidiospores.