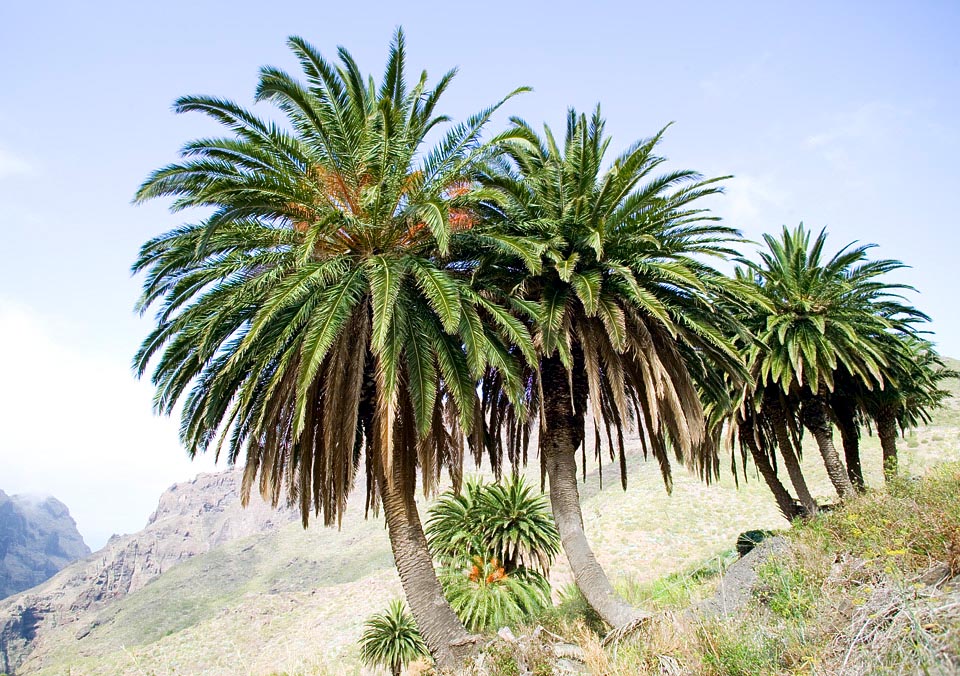 Phoenix canariensis in its Canaries habitat. It grows in open, and sunny positions, from the sea level up to 600 m of altitude, and well adapts to grow in various climates © Giuseppe Mazza

The name of the genus comes from the Greek name, given in the ancient times, to the date palm.

The name of the species refers to its place of origin: the Canary Islands. 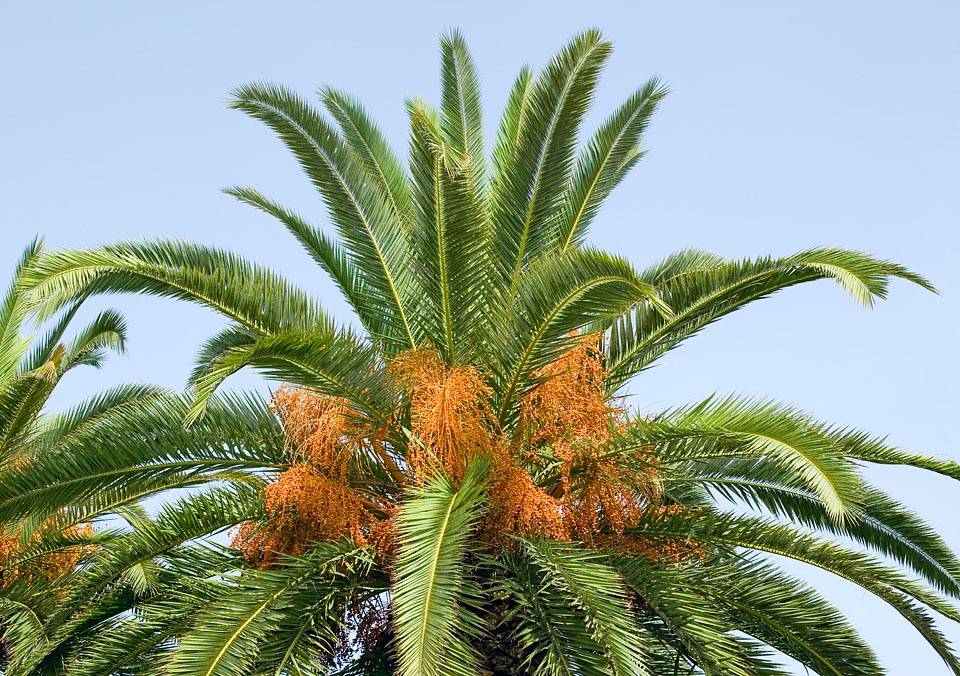 Spread, at the beginning, in all the islands of the archipelago, the presence of Phoenix canariensis Chabaud (1882) has reduced due to the excessive modification of the natural habitat made by man. The major spontaneous population is actually located at La Gomera, less numerous are the populations present in Gran Canaria, Fuerteventura, and Lanzarote. It grows up in open and exposed to the sun spaces, from the sea level up to about 600 metres of altitude. It presents a solitary trunk, rather stocky, tall even 20 metres, with a diameter of about 70-90 cm, where remain evident, in the oldest part, the rhomboidal scar-like marks of the foliar bases. 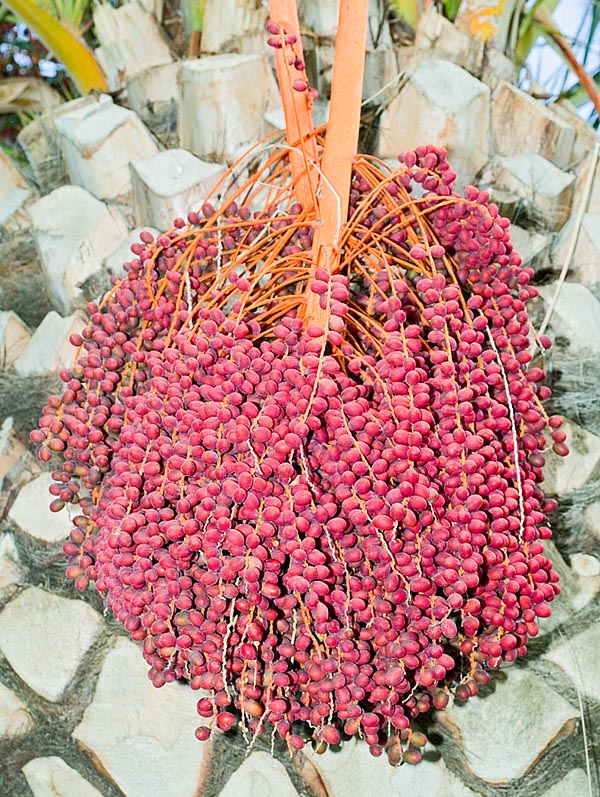 Specimens exist also with reddish-brown fruits, by some deemed as varieties, by others as hybrids © Giuseppe Mazza

Its foliage is imposing, thick, made up by more than a hundred of pinnate leaves, curved, of 4-6 metres of length, persistent for long time.

Rigid leaflets of green colour, reduced to robust thorns at the base.

Dioecious plant (each individual carries either male or female flowers only), presents ramified inflorescences shorter than the leaves, the male flowers being of a cream-white colour, and the female ones, yellow-orange.

In the wild, the blossoming takes place in spring, and the ripening, in autumn.

The ovoid fruits, about 2 cm long, with gold yellow colour, are theoretically edible, but with very scarce and rather unpleasant pulp.

There are also individuals with reddish-brown fruits, very striking, which are considered as varieties by somebody, as hybrids by others.

The Phoenix canariensis crosses easily with the other Phoenix, particularly with the the Date palm (Phoenix dactylifera), as testifies the ample variety of hybrids with intermediate look, between the two species present in cultivation.

It reproduces exclusively by seed, which easily germinates in 100-110 days.

Due to its marked ornamental characteristics, its suitability to climates going from the temperate to the tropical, and to an ample variety of soils, even poor and semi-arid, it is widely utilized in parks and gardens, particularly in the temperate zones, where it can resist to temperature down to -8 °C.

Introduced in Europe by the second half of the nineteenth century, it has rapidly spread in all the coastal countries of the Mediterranean.

As a matter of curiosity: the first information concerning the existence of palms in the Canary Islands, is given by Pliny the Elder (23/24 - 79 AD), while relating the expedition of Numidia’s king, Juba II (Naturalis Historia). 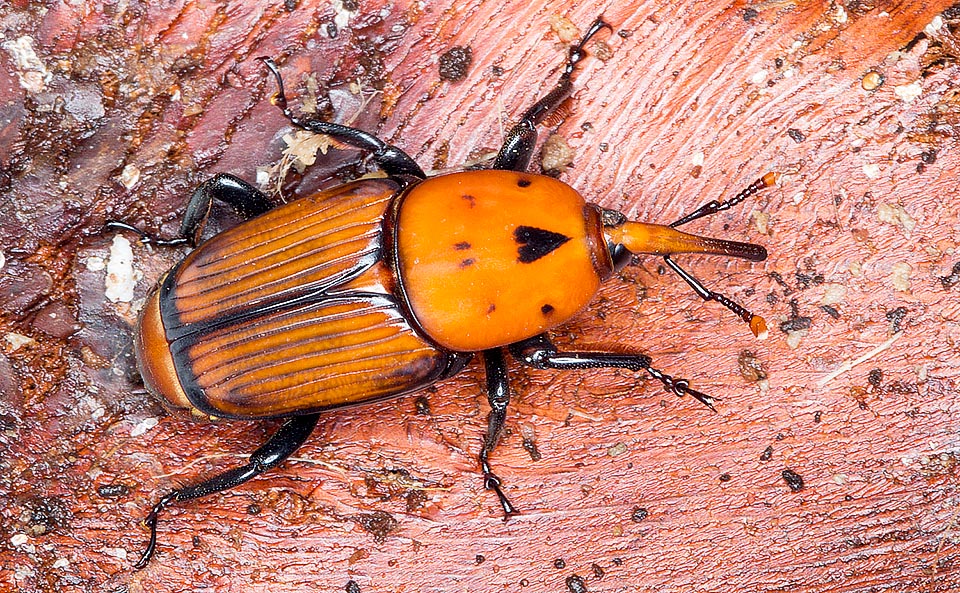 Unluckily now this palm is seriously menaced by a beetle, the Rhynchophorus ferrugineus, that attacks also other Phoenix but loves particularly this one. It is almost impossible to make an early diagnosis, and when the parasite has well settled into the plant, there are no really effective treatments © Giuseppe Mazza