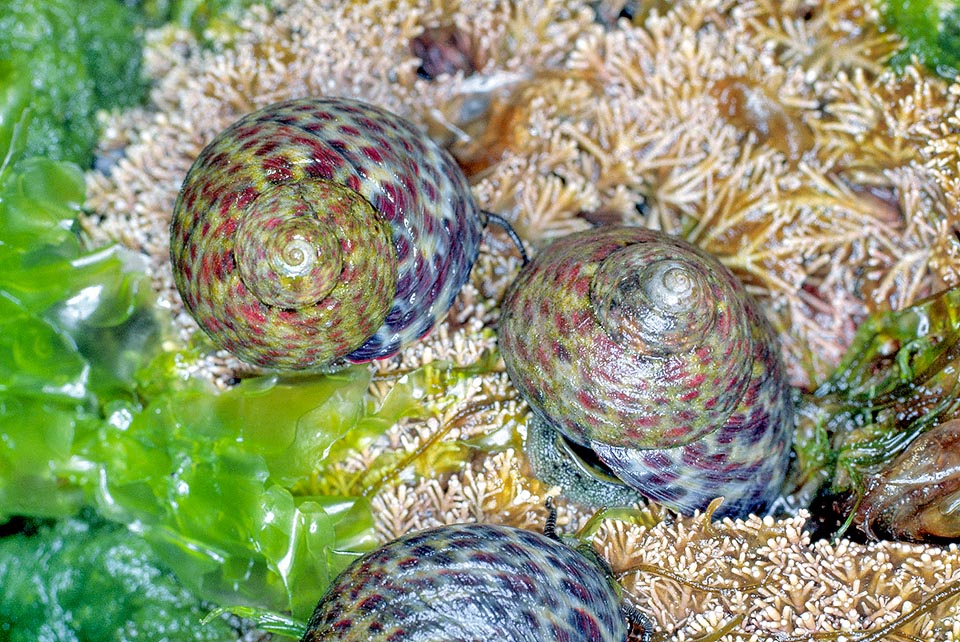 Present in the Mediterranean, except Black Sea, and in the Atlantic between southern Portugal, Morocco and Canary Islands, the Porcus turbinatus, here emerging in the low tide, is a gastropod with a solid roundish shell, grey, yellowish or greenish with violet, reddish or chocolate dots, of 20-25 mm and 5-6 spires little distinct at the apex © Giuseppe Mazza

The Turbinate monodont (Phorcus turbinatus, Born, 1778), is a small marine gastropod belonging to the family of the Trochidae that counts more than 70 genera with countless species and synonyms present in tropical, temperate and arctic waters.

The name of the genus Phorcus gets its origin from a marine divinity of the ancient Greeks, whilst the specific name turbinatus means not by chance in Latin “of conical shape”.

The Phorcus turbinatus is present in the Mediterranean, excepting the Black Sea, and in the Atlantic between southern Portugal, Morocco and the Canary Islands. 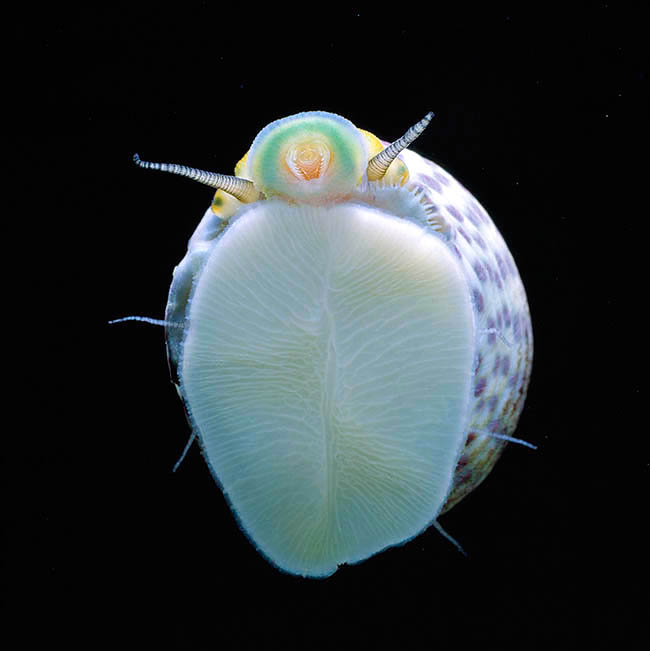 The foot of Phorcus turbinatus is very developped and here, portrayed at work on the aquarium glass, is well visible the radula with which it scratches the algae on the rocks. It can be found up to a maximum of 5-10 m of depth © Giuseppe Mazza

Very common along the coasts, it is often found emerging on the rocks in the tidal zone, hidden by green algae, such as the Sea lettuce (Ulva lactuca) or sheltered in the cracks of the rocks between whitecaps. It goes down at most up to 5-10 m of depth.

The Turbinate monodont nourishes of microscopic algae and debris that it scratches on the rocks with the radula, the typical tongue with chitinous teeth grate-like arranged, often important for the determination of the gastropods, that comes and goes on the food carrying it, chopped, to the mouth.

The fecundation is external and upon hatching the eggs free the larvae that are left to currents and metamorphoses quickly colonizing other rocks.

After the death, the shell becomes often the house of small pagurians such as the Clibanarius misanthropus, decapod crustacea having soft abdomen that need protection.