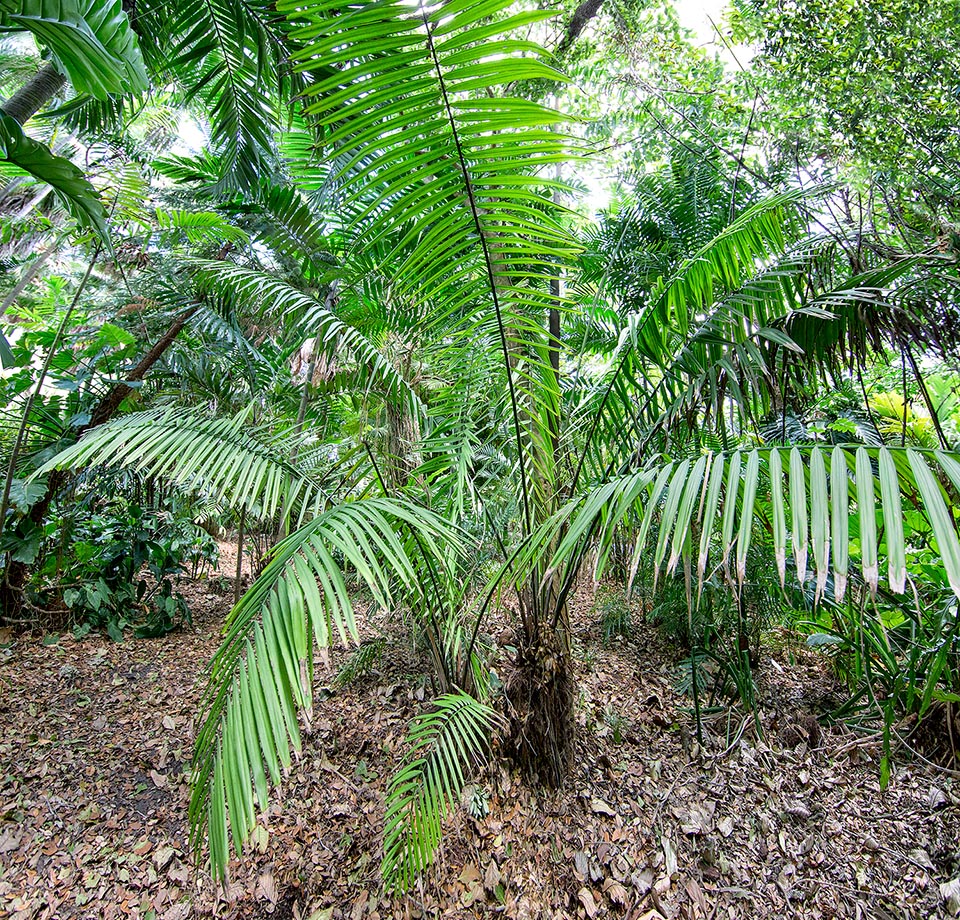 The Phytelephas macrocarpa is a dioecious species native to Bolivia, north-western Brazil and Peru, where it grows up to 1200 m of altitude, in the rainy forests, along the water streams and the periodically flooded soils. The stem about 30 cm broad, longer in the male plants, is often subterranean or bent and does not exceed the 2 m © Giuseppe Mazza

The species is native to Bolivia, north-western Brazil and Peru, where it grows in the rainforests, up to about 1200 m of altitude, usually along the banks of water streams on periodically flooded alluvial soils.

The generic name is the combination of the Greek substantives “φυτόν” (phytόn) = plant and “ἐλέφας” (elephas) = elephant, but also ivory, with reference to the endosperm utilized as ivory substitute; the specific name is the combination of the adjective “μακρός” (makrόs) = big and of the substantive “καρπός” (karpόs) = fruit, with obvious reference. 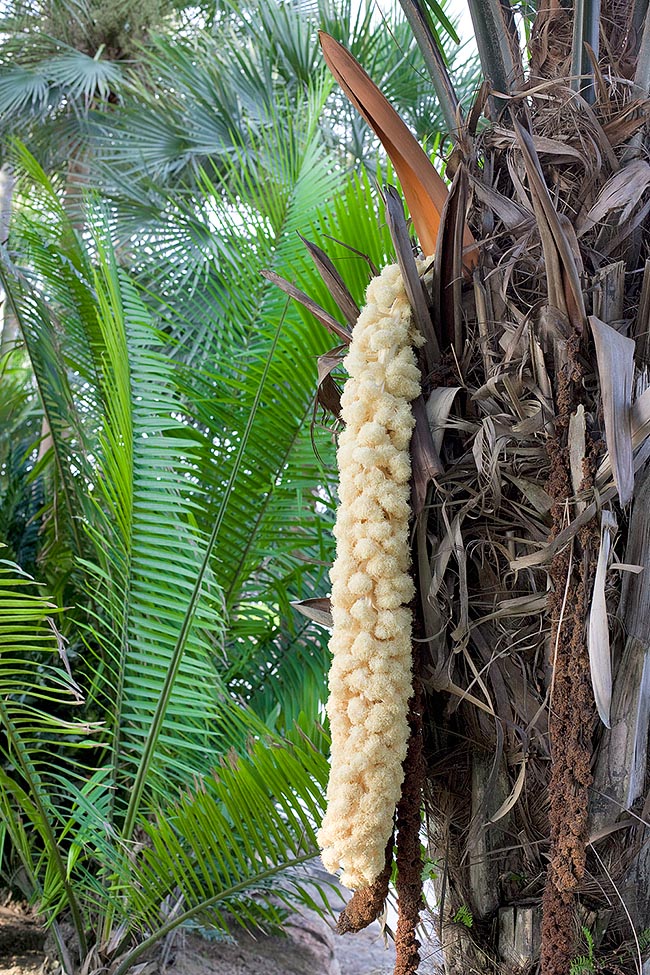 A male inflorescence. The endosperm of the growing fruits is a delicacy, consumable in liquid or gelatinous state. Later on it becomes extremely hard and furnishes to the handicraft, with analogous characteristics, the vegetal ivory © Giuseppe Mazza

The Phytelephas macrocarpa Ruiz & Pav. (1798) is a dioecious species (each individual has either only male flowers or only female ones) with single underground or short stem, usually bent or prostrate, up to 2 m long with a diameter of 30 cm, covered by a mass of fibers and by the base of the petioles, the male plants are usually higher than the female ones; rarely it appears cespitous.

The leaves are pinnate, erect or just arcuate, up to about 6 m long with 50-70 leaflets per side, linear, sharp, regularly distributed along the rachis on the same level, up to about 90 cm long in the median part and up to 5 cm broad, of glossy dark geen colour above, paler below.

The inflorescences generate between the leaves, the male ones are formed by a cylindrical spadix, fleshy, about 70 cm long, bearing white flowers, sessile (without peduncle), about 1,6 cm long, united in groups of four, with 25-250 stamens per group; the female inflorescences generate at the level of the soil, are globose, compact, with about 22 cm long grouped flowers; the flowers, either male or female, emit a pungent odour.

The fruits are grouped in a roundish mass, of up to 50 cm of diameter, covered by woody plaques of dark brown colour with central pointed protrusions; the single fruits contain four to six, rarely up to nine, ellipsoidal or reniform seeds 2-6 cm long.

It reproduces by seed, in sandy substrata, that germinates in 3-6 months in the best conditions, but may take even some years.

Well known species due to the white and extremely hard endosperm of the ripe fruits that is used, in lieu of the ivory of animal origin, for the realization of buttons (in particular before the advent of plastics), handicrafts, bijouteries, etc. the refractive index, the hardness and shine are similar to those of the ivory, the density is instead lower, about 1,4 g/cm³.

The vegetal ivory represents still nowadays an important economic resource for the local populations, especially after the banning of the animal origin one. Locally, the plant has also other uses; the unripe endosperm is consumed in the liquid state, as beverage, as well as semi-solid, gelatinous, and is considered as a delicacy; the leaves are utilized by the local populations as cover of the dwellings. It is also a very ornamental plant, but little utilized for such purpose, requires a tropical climate, and marginally subtropical, humid, with high temperatures all over the year, even if it seems to be able to resist, exceptionally and for very short time, temperatures close to the 0 °C; conversely, it is not particular about the soil, provided there is an ample availability of water, as it does not bear dry periods.