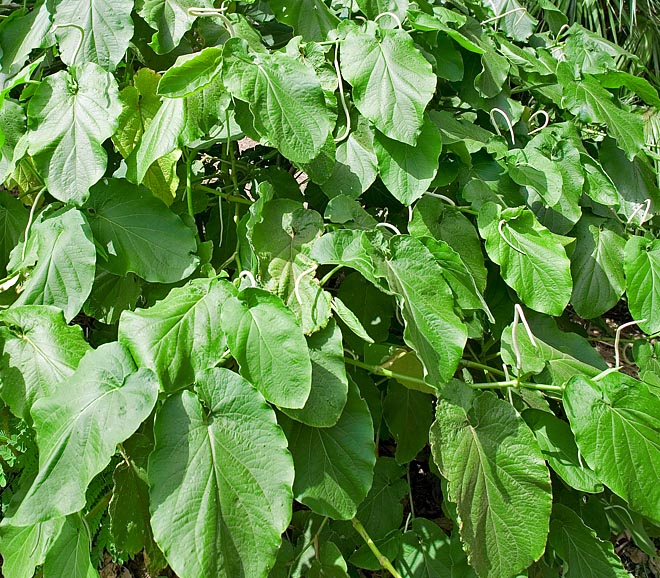 The species is native to Belize, Colombia, Costa Rica, El Salvador, Guatemala, Honduras, Mexico, Nicaragua and Panama, where it grows at the margins of the humid forests and in open areas from the sea level up to about 1500 m of altitude.

The name of the genus is the Latin substantive “piper, -eris” = pepper, the spice obtained from the fruits of the Piper nigrum, the name of the species is the Latin adjective “auritus, a, um” = having long ears, with reference to the shape of the leaves.

The Piper auritum Kunth (1815) is a semi-woody herbaceous species or an evergreen 1,5-6 m tall shrub, with erect stems, frail, knobby, often equipped with aerial roots at the base and the upper branches placed almost horizontally. The leaves, on a 4-12 cm long petiole wingend for part of its length, are simple, alternate, of variable size and shape, ovate, oblong or cordate with suddenly pointed apex and base usually asymmetric, 20-35 cm long and 12-25 cm broad, of pale green colour with the surfaces finely pubescent, soft to the touch, aromatic. The inflorescences, on a 2-8 cm long peduncle, are axillar spikes, opposed to the leaves, arcuate or hanging, 12-25 cm long and of 0,3-0,5 cm of diameter, with a crowd of tiny whitish or pale green flowers, invisible to the naked eye, thickly placed along the rachis; the fruits are drupes of less than 1 mm of diameter, rarely produced outside the origin zones. It reproduces by seed, to be placed in surface on sandy loam rich of organic substance, kept humid, at the temperature of 20-22 °C, by cutting, but usually recourse is done to the root suckers, produced in quantity and with which it quickly expands so much to become invasive in favourable situations. 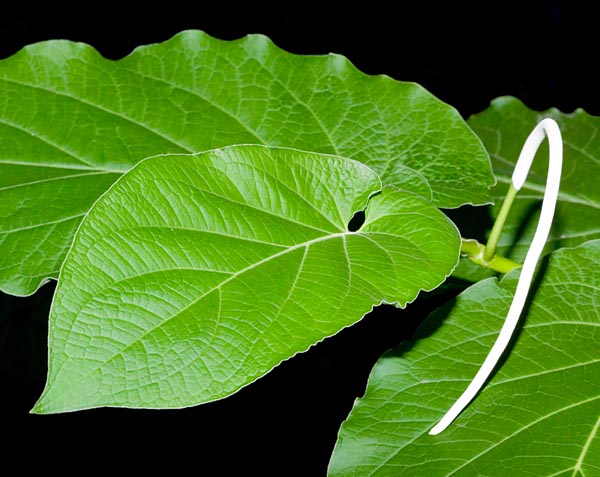 The leaves are used for cooking, but the typical aroma might be carcinogenic © Giuseppe Mazza

Species of easy cultivation and fast growth with particularly ornamental foliage, cultivable in the tropical, subtropical climates, marginally in the warm temperate one, where it can stand without any damage temperatures up to about 0 °C, lower temperatures, up to about -6 °C, destroy the aerial part, but the plant usually is capable to grow again from the roots in spring.

It can grow in full sun but it is preferable a partially shaded position and is not particular about the soil, provided the same is well draining; the waterings in summer must be regular and abundant, as it requires a permanently humid soil.

Where the climate does not allow a continuous permanence in open air, it can be cultivated in pot, in sandy loam, draining, rich of organic substance, in order to be moved in winter to a protected, luminous, location, with temperatures preferably not lower than 10 °C. The leaves, fresh or dried, are utilized, in particular in the Mexican cuisine, for aromatizing various dishes and enveloping meat or fish for the cooking, for preparing a typical green sauce and a liquor.

The leaves do contain high concentration of safrole, that gives them the typical aroma, toxic aromatic compound, suspected to be carcinogenic, their utilization should be therefore in some way discouraged or however limited avoiding the excesses; the leaves are furthermore utilized since remote times in the popular medicine for various pathologies.