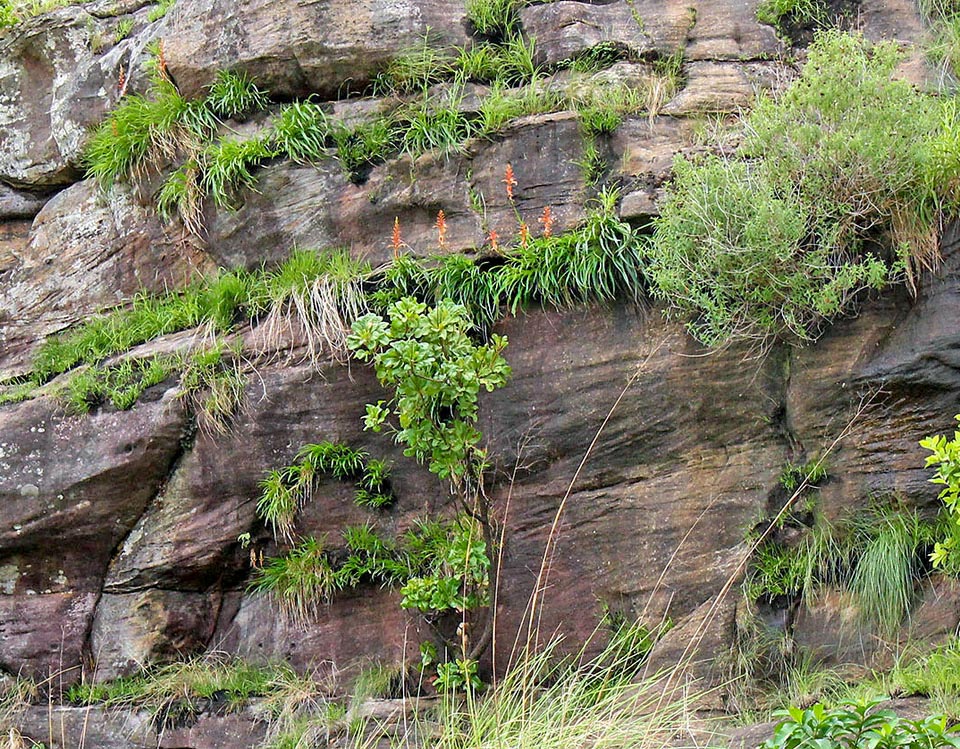 Present in the Red List in the endangered species, Pitcairnia feliciana is the only bromeliad present in the Old World © Rainer Wendt

Pitcairnia feliciana (A.Chev.) Harms & Mildbr. is the only species belonging to the Bromeliaceae not native to Americas. It is found on the monadnocks of sandstone (inselbergs) of the Fouta Djallon, in the northern part of the territory of Middle Guinea (West Africa).

Pitcairnia is a genus of plants of the family Bromeliaceae, included in the subfamily Pitcairnioideae, with more than 400 species, whose name comes from the Doctor William Pitcairn (1712-1791), Scottish physician and botanist. 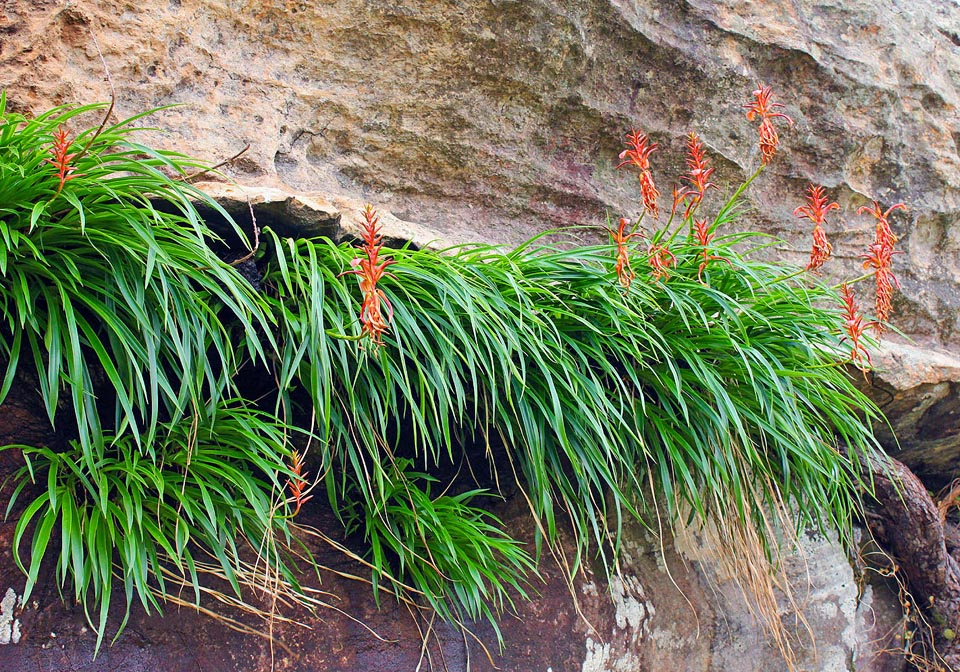 It is found only on the isolated outcrops of sandstone of Fouta Djallon highlands, in the northern part of central Guinea © Rainer Wendt

The specific epithet feliciana honours Henri Jacques-Félix (1907-2008), French botanist, explorer, specialist in tropical African flora, who was the first (1937) to discover and collect this plant.

Pitcairnia feliciana is a species endemic to Guinea and based on molecular data has close relatives in Venezuela, whilst, due to the resemblance of the flowers, leaves and of the same growth temperature, is connate with Pitcairnia glaziovii Baker, species endemic to the Atlantic Forest. 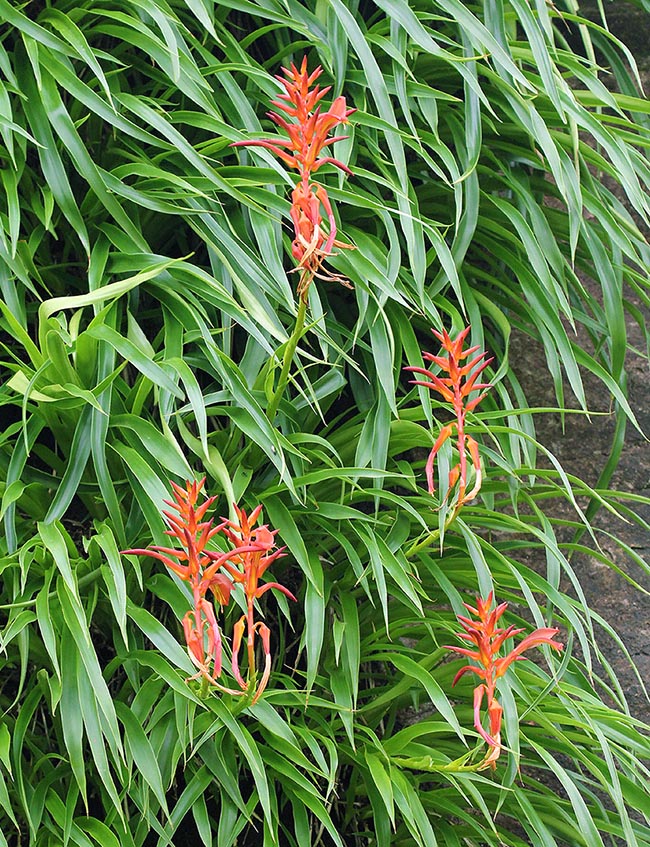 It seems that its ancestors of this plant reached Africa 9-10 million years ago, with seeds carried by migratory birds © Rainer Wendt

The molecular clock has evidenced that the speciation of P. feliciana may have occurred about 9,3 (10) million years ago, hence the presence of this species on the African soil is not due to the continental drift as Americas have separated from Africa many years before.

Therefore, it is a possible long-range dispersion done by means of seeds carried by migratory birds.

Moreover, the species displays bright orange red flowers, not odorous, and with abundant nectar, being these characters typical to the species utilizing birds as pollinators, even if, in Africa, P. feliciana  has never been observed while being pollinated by birds.

For the African presence of P. feliciana it is also possible to hypothesize that, in the past, have occurred bidirectional faunal and floristic exchanges between Africa and South America datable about 80-40 million years ago.

Obviously, these are dates that greatly precede the genesis of Pitcairnia, but it is possible that the route of colonizations has occurred, through the southern Atlantic, on the Rio Grande Rise ocean ridge and of the Walvis ridge.

The settlement of P. feliciana as sister group of P. glaziovii indicates that the genus could have entered the Brazilian area before the diversifications in its present taxa, that is, more than 9,3 million years ago.

All above suggests that the events of occupation of this area could have happened during the cold and dry episodes of the Neogene, that is about 23 million years ago, when the dense pluvial forest was partially replaced by the savannah’s corridors.

P. feliciana is a perennial herb, terricolous, saxicolous, glabrous, up to 70 cm tall with bulbiform rhizome, covered with toothed scales. It has alternate, linear, 50 cm long and 5-9 mm broad leaves with thorny and hooked teeth. The cauline leaves are strictly lanceolate, amplexicaul at the base and with entire margins.

Among the leaves, during the months of June-July, grow the terminal racemose inflorescences, up to 30 cm long, bearing zygomorphic, trimerous flowers with lanceolate, up to 2,5 cm long sepals and petals shaped like a reversed lance (oblanceolate), up to 5 cm long, of orange or intense red colour. 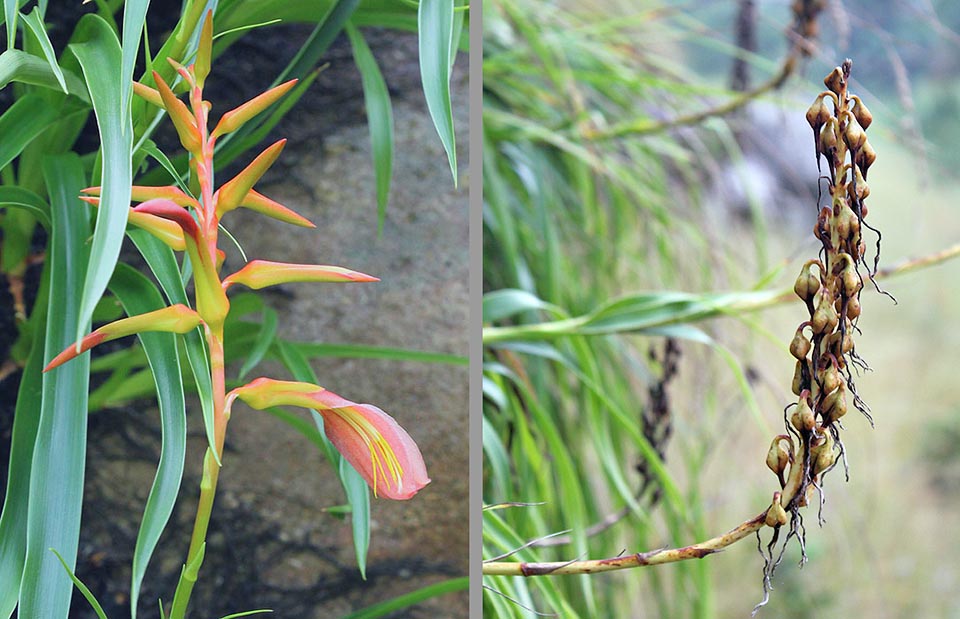 Close-up of the even 30 cm long inflorescence. Left, a flower lets glimpse the 6 long stamens. Right, the fruits are capsules full of seeds © Rainer Wendt

The stamens are six and the styles are elongated with capitate and twisted stigmas. The fruits are dry capsules with many seeds, whose ripening takes place in the months of September-October.

P. feliciana forms tufts that with their roots do anchor strongly into the cracks of the rocky walls of sandstone, occasionally of granite, and overcomes the dry season in a state of dormancy by drying up the leaves. It is a species deemed to be in danger of extinction and for such reason it has been inserted in 2018 into the Red List of the endangered species of the IUCN (International Union for Conservation of Nature). 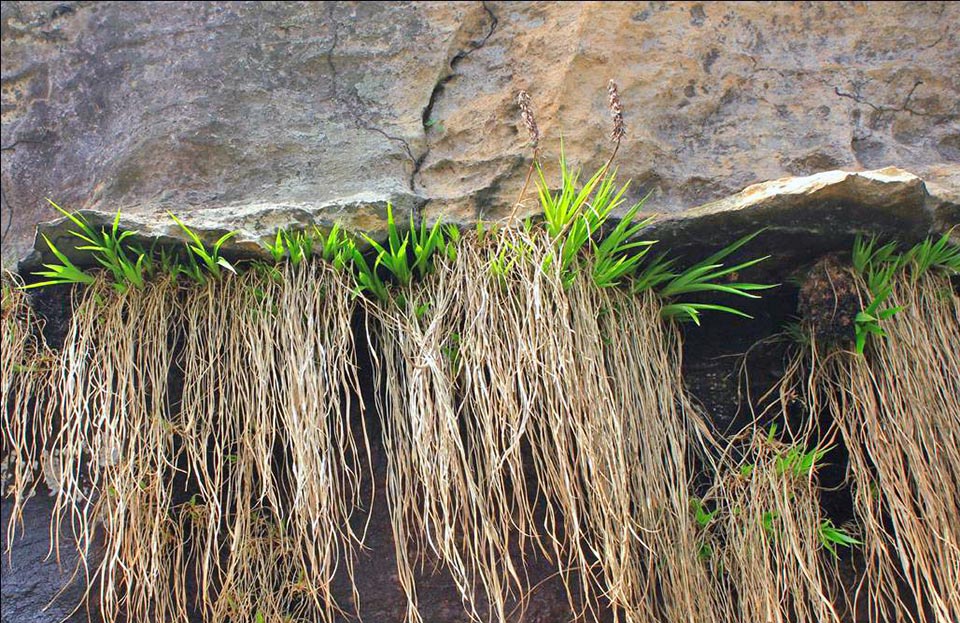 In the dry season, the plant is dormant, but reappears with the first rains, thanks to the bulbiform rhizome anchored in the roots th the cracks of the rocks © Rainer Wendt

The threats are direct, like fires, urbanization, and enlargement of roads, but are also indirect, like pollution and climate changes.

Even if it is a protected species, P. feliciana is easy to cultivate and its blooming lasts several months, a characteristic that renders it very desired by the lovers of ornamental plants. For an optimal growth, can be utilized a light substratum to be maintained humid, and to expose it to light and air, but not to currents and to sudden changes of temperature.