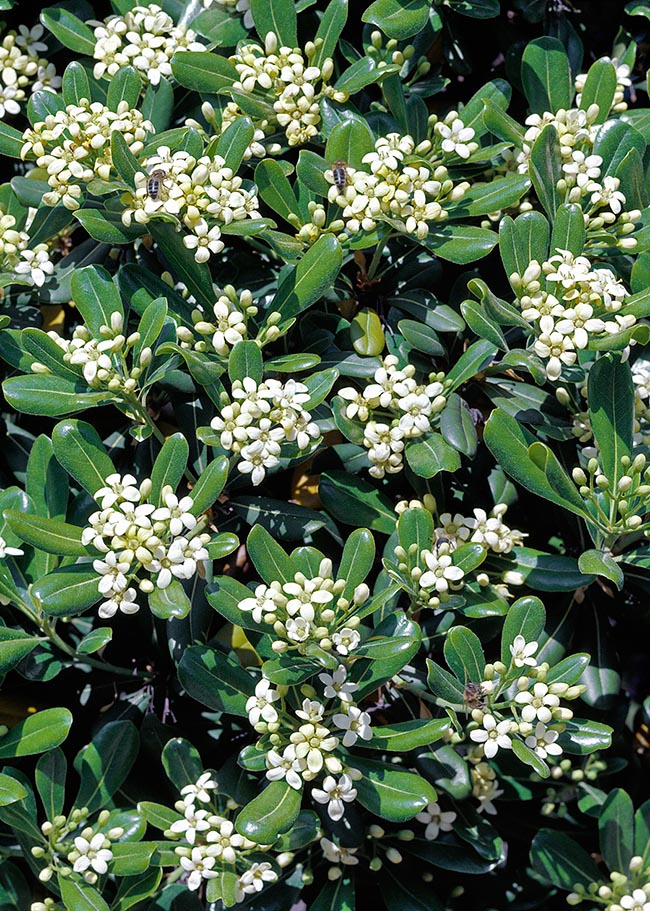 The Pittosporum tobira is native to Japan, Northern Taiwan and Southern Korea. Evergreen shrub or small sapling with compact and roundish crown, it can reach the height of 6 m. The umbellate terminal inflorescences, with white flowers before and later cream, emanate an intense fragrance that reminds that of the flowers of orange © G. Mazza

The species is native to Japan (Honshu, Kyushu, Ryukyu and Shikoku), Northern Taiwan and Southern Korea where it grows in the forests from the sea level up to about 1800 m of altitude.

The name of the genus is the combination of the Greek substantives “πίττα” (pitta) = pitch and “σπόρος” (spóros) = seed, with reference to the resinous substance that surrounds the seed; the name of the species is the Japanese one “トベラ” (tobera).

The Pittosporum tobira (Thunb.) W.T. Aiton (1811) is a shrub or small evergreen tree, 3-6 m tall, with compact and roundish crown.

Leaves, on a 0,8-2 cm long petiole, grouped at the apex of the branches, alternate, obovate or spatulate with obtuse or rounded apex and entire margin slightly bent downwards, coriaceous, 4-10 cm long and 2-4 cm broad, of glossy dark green colour above, paler and opaque below, and yellowish central vein.

Umbellate terminal inflorescences in spring with hermaphroditic flowers, on a 1-2 cm long pedicel, of pure white colour that with the time turns cream yellow, that emanate an intense fragrance reminding that of the orange flowers.

The fruit is a trivalve globose capsule, of about 1,2 cm of diameter, pubescent, initially green then yellowish when ripe, containing some angular seeds, about 0,4 cm long, of bright red to dark red colour, covered by a resinous substance.

It reproduces by seed, that has a short lasting germinability, cleaned from the resinous substance that covers it, in organic sandy loam maintained humid at the temperature of 20-24 °C, with germination times of 2-3 months, and by semi-woody cutting in summer.

Robust species, of easy cultivation, amply diffused and often naturalized in the tropical, subtropical climate regions as well as in the warm temperate one, where adult specimens, duly protected, may bear temperature up to about -10 °C, is exceptional and for short time. Utilized as isolated specimen or in mass, for borders and hedges, formal and informal, requires full sun or partial shade and well-draining soils, to avoid root rottenness, fertile, slightly acidic to slightly alkaline. 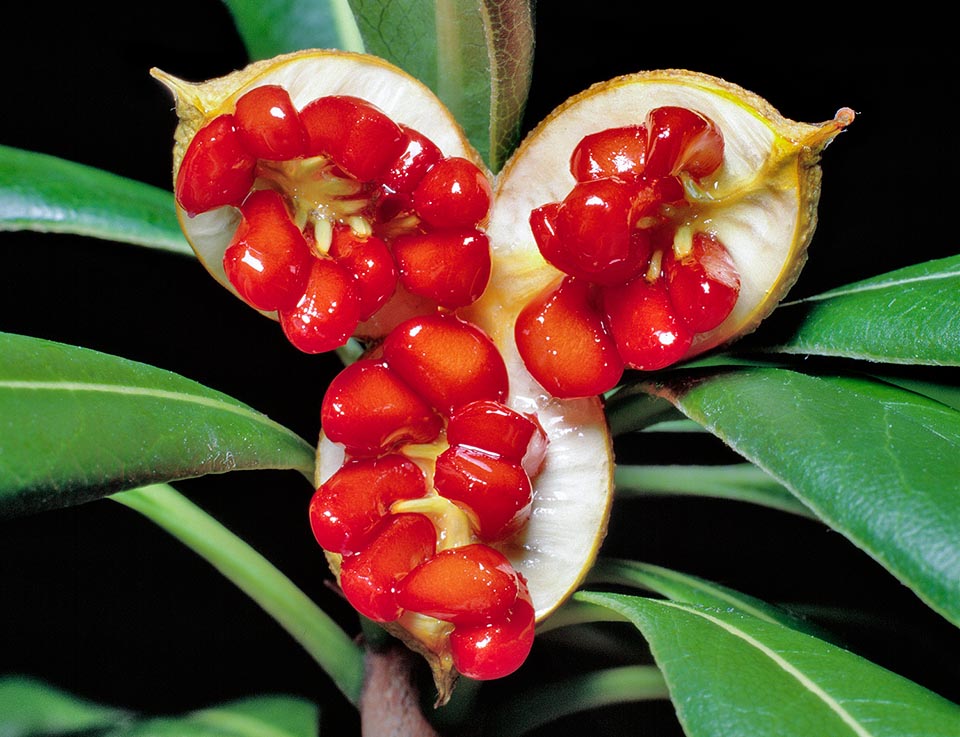 The fruit as a trivalve globose capsule. Initially green and then yellowish, it opens when ripe with angular bright red or dark red seeds, covered by a resinous substance © Giuseppe Mazza

It is to be regularly watered in the climates characterized by warm and dry summers, even if, well rooted, may bear short period of drought. It presents a high resistance to the winds, and for such reason it is widely employed in the gardens close to the sea, and to the atmospheric pollution of the cities. It bears well the pruning, for a compact posture, and may be grown as sapling and employed in the topiary art.

Numerous varieties have been selected, among these, very utilized, but more delicate than the species, the variety ‘Variegatum‘, with whitish variegations along the edges of the leaf, and ‘Nanum’, that normally does not exceed the height of 80 cm, with particularly compact rounded foliage.

In the less favorable climates it can be cultivated in capacious containers, to be sheltered in winter in a particular luminous environment, utilizing an organic loam with addition of coarse siliceous sand per a 30%. Usually not subject to disease, it can suffer from chlorosis in soils with high pH, to be treated with microelements under form of chelates. Among the parasites, the most frequent are aphids and mealybugs that are to be promptly treated with specific products.

→ To appreciate the biodiversity within PITTOSPORACEAE family please click here.