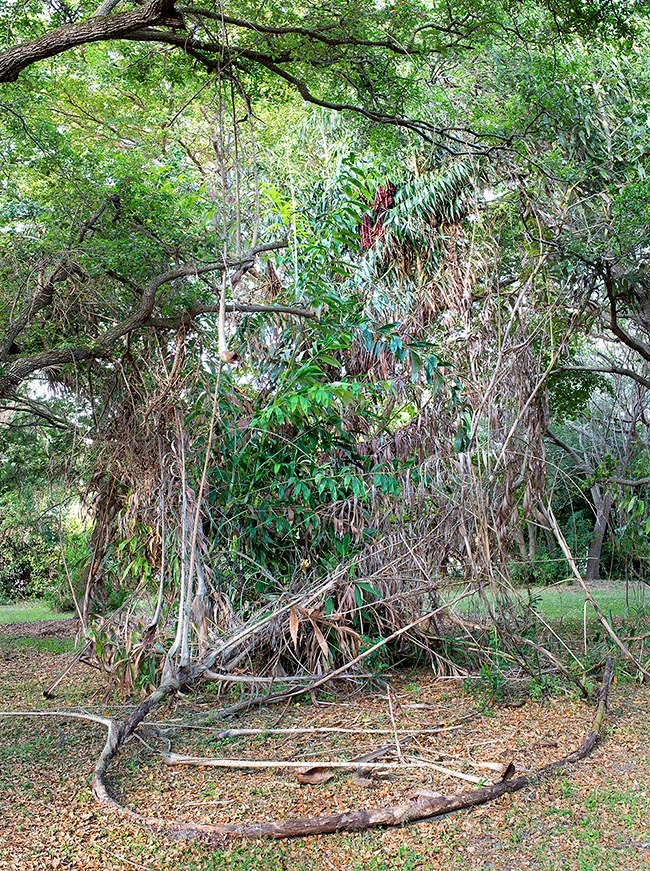 The species is native to Borneo, Cambodia, Java, Malaysia, Myanmar, Philippines, Singapore, Thailand and Vietnam where it grows in the humid forests usually at the margins of clearings, from the sea level up to about 2000 m of altitude.

The name of the genus is the combination of the Greek adjective “πλεκτός” (plectós) = twisted and of the substantive “κόμη” (kome) = crown, with possible reference to the inflorescence; the name of the species is the Latin adjective “elongatus, a, um” = elongated.

The Plectocomia elongata Mart. ex Blume (1830) is a solitary species, dioecious, monocarpic, spiny, climbing, with robust stems, 30-50 m long, and of 10-18 cm of diameter, that anchor on the trees through cirri.

The almost distichous leaves, on a 20-30 cm long petiole, are pinnate, 3-6 m long, with 40-70 pairs of lanceolate leaflets with acuminate apex, in the median part 45-60 cm long and 3-6 cm broad, irregularly arranged along the rachis in groups of 2-6, of glossy green color above, whitish grey below.

The rachis extends besides the leaflets in a cirrus, up to 3 m long, armed of groups of curved spines like hooks. The tubular foliar sheath, of dark green color and covered by whitish tomentum, is provided of oblique rows of spines, 3-4 cm long, of golden brown color. At the end of the vital cycle are produced at the same time on the axilla of the 7-10 terminal leaves, of reduced dimensions, the inflorescences, similar in the male and female plants, up to 2 m long, with 10-12 drooping primary ramifications, up to 1 m long, with many short close rachillae, bearing each one numerous flowers of cream color, covered by overlapped bracts concave, 5-7 cm long, of brown reddish color. Sessile male flowers with calyx and tubular corolla with 3 triangular lobes and 6 stamina, similar female flowers, usually pedicellate, with 6 staminodes, trilocular globose gynaeceum covered by tiny scales and 3 long stigmata.

Globose fruits of 1,5-2 cm of diameter covered by imbricate reddish scales with pointed apex generally erect, usually containing one only globose seed of 1 cm of diameter. 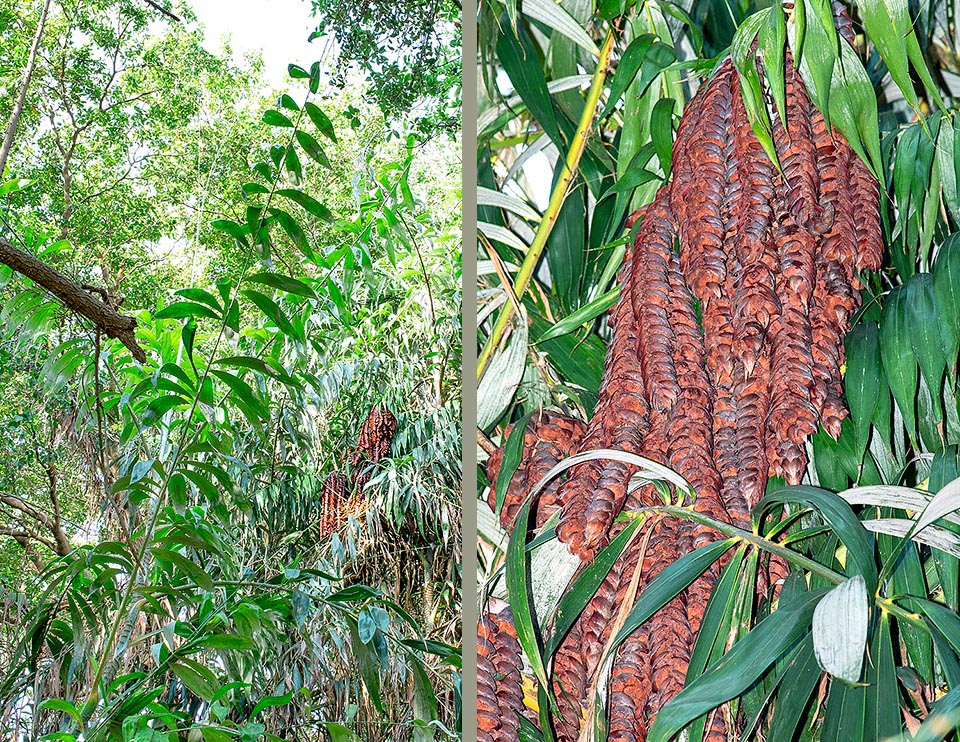 The rachis extends besides the lanceolate leaflets in a cirrus, even 3 m long, armed of spines curved like hooks to anchor on the branches of the trees. On the right the inflorescence, up to 2 m long. The flowers of both sexes are covered by overlapped concave bracts, 5-7 cm long, of brown-reddish color. The lymph has medicinal properties © Giuseppe Mazza

One of the most imposing climbing palms, commonly known under the name of rattan, with unusual and particularly attractive inflorescences, but whose cultivation is limited to the large gardens of the tropical and subtropical zones, due to the dimensions it may reach and especially for the high dangerousness of its spines, and in any case far from parking and transit areas.

The stems, that do not have particularly high characteristics of resistance and duration, are utilizable for furniture of various type. The lymph is utilized in the traditional medicine of some populations for various pathologies.