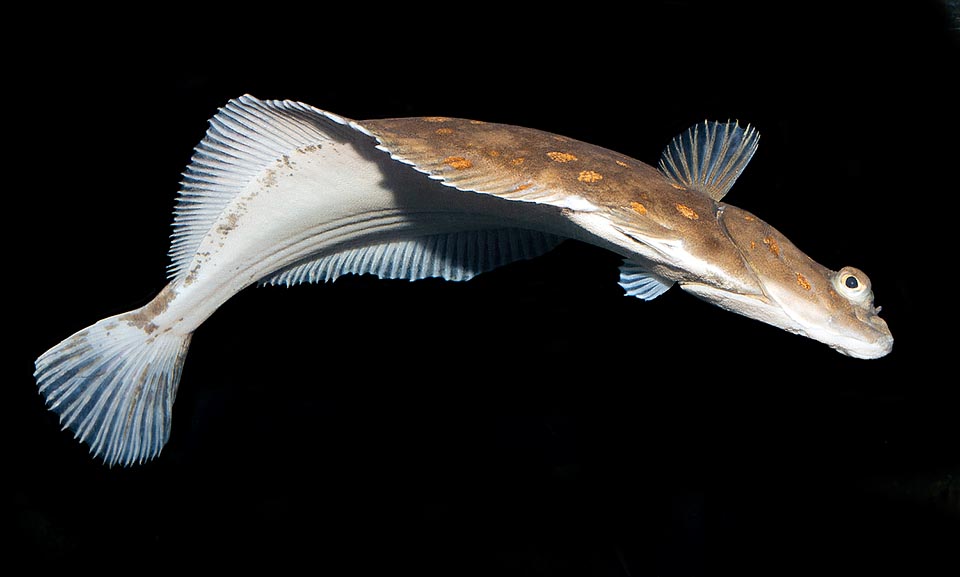 Important for the human nutrition, the Plaice (Pleuronectes platessa) has given name to the order of Pleuronecteformes counting more than 800 species © Giuseppe Mazza

The Plaice or European Plaice  (Pleuronectes platessa Linnaeus, 1758), belongs to the class of the Actinopterygii,  the ray-finned fishes and to the order of the Pleuronectiformes, that rightly gets its name from this species, important for the human feeding, and to the family of the  Pleuronectidae,  counting 66 species.

The genus Pleuronectes comes from the Greek “πλευρόν” (pleurón) = side and “νήκτης” (nèktes) = swimmer, because this fish swims inclined on one side, whilst the specific term platessa comes from the Latin “platus” = flat, with obvious reference to its morphology.

The Plaice is diffused in the north-eastern Atlantic, from Greenland to the Atlantic European coasts, including the Baltic Sea and up to the Gulf of Cadiz. Instead, it is absent in the Mediterranean Sea, where it was maybe present in the Glacial Period. The presumed occasional current sightings of the Italian fishermen come from the confusions with the analogous Platichthys flesus. So, we find the Pleuronectes platessa in the waters of Greenland, Iceland, Faroe Islands, Ireland Isle of Man, United Kingdom, Denmark, Sweden, Norway, Finland, Russia, Estonia, Lithuania, Latvia, Poland, Germany, Holland, Belgium, France, Spain and Portugal.

Here, swimming on a side, in all its length. The eyes have moved to the right side and we note, vertically, the pectoral fins © Giuseppe Mazza

It is a demersal species, that is, swimming not far from the bottom. The adults can go down up to 200 m and even lower with the age, it seems up to 400 m, whilst for the juveniles is sufficient on 1 m of water. It is a nocturnal fish spending the hours of the day on the bottoms, more or less covered by sand, mud or debris. It performs migrations and is present also at the mouth of the rivers, in brackish waters, however without never venturing, apart rare instances, in the fresh waters.

The Plaice can even weigh 7 kg and may measure 1 m of length, even if the fished ones rarely exceed the 50-60 cm.

So, at first glance, it could be defined a “giant sole” but its size is nothing if compared to the famous Atlantic Halibut, the Hippoglossus hippoglossus of North Atlantic and the Pacific Halibut of North Pacific Hippoglossus stenolepis, that are the real giants of the Pleuronectiformes: fishes exceeding the 300 kg with a record length, for the first one, of 470 cm. 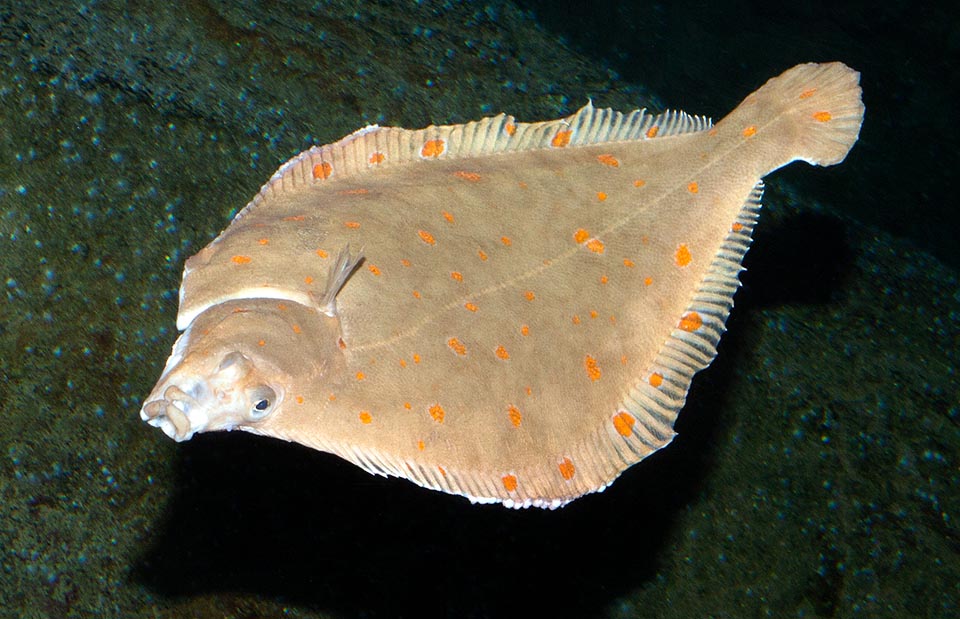 May live 50 years, reaching 7 kg and 1 m of length, but unluckily is fished too young, with trawls, ending frozen or with French fries in the fast food © Giuseppe Mazza

The decidedly flat body, roughly rhomboid, with the fins stretched. The eyes, close together and raised, the lower, a little more ahead towards the mouth, have moved on the right side of the fish, usually the only one pigmented, whilst the left side is the one lying on the bottom. The “left handed” ones are not missing, however, with the eyes migrated on the left side, and those with a more or less dotted livery on both sides.

Behind the eyes we note a characteristic bony crest formed by 4-7 tubercles. The mouth is small, armed with rows of teeth basically molariform, with the jaw getting almost to touch the lower eye and the prominent mandible.

The colour of the visible side, the one not touching the bottom, is grey-brown with characteristic and showy circular red orange dots extending to the fins. Spots apart, it can change colour by camouflaging rapidly thanks to the work of the chromatophores, that dilate or contract the pigments. On the other hand, it is already a poorly visible animal especially when resting the bottom, half buried into the sand, with the eyes observing like periscopes, the surroundings 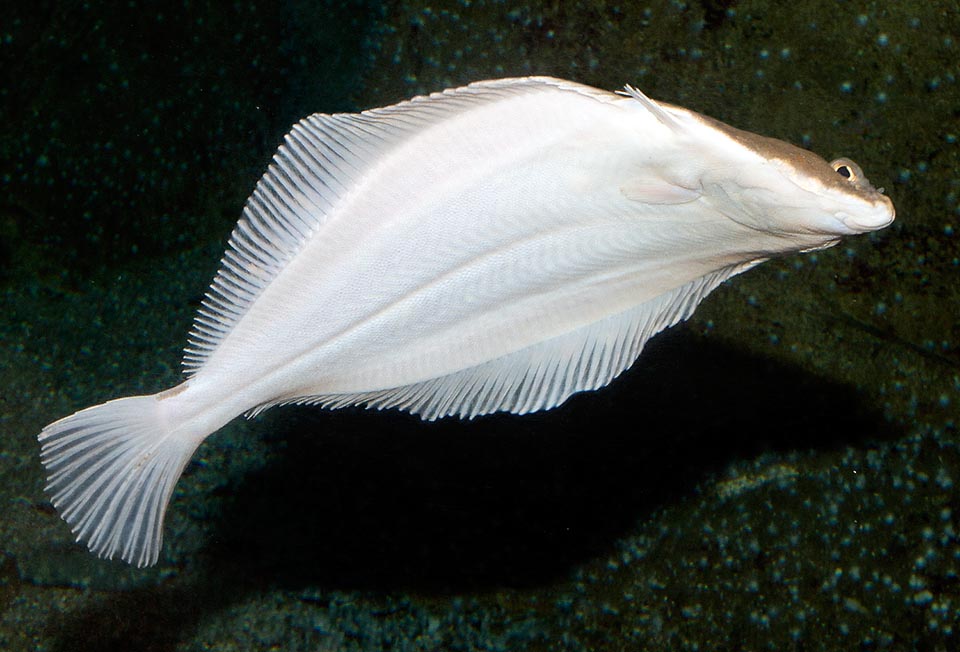 The left side, the one laying on the bottom, is greyish white, whilst the right shows on variable background showy circular red or orange spots © Giuseppe Mazza

The scales, tiny, mostly cycloid, are more evident on the lateral line that covers, almost rectilinear, 88-115.

The Plaice goes hunting mainly during the night with an anguilliform movement, moving the body and the caudal fin. It predates in shallow waters various benthic organisms, mainly polyketes, ophiures, crustaceans and bivalves. We must note that, especially when young, the shrimps stand among the choice preys whilst later on the big individuals appear to respect some of the crustaceans, such as the Palaemon elegans and the Palaemon adspersus, because while resting during the day lying on the bottom, they do free them from the ecoparasites, maybe also from the leeches the fishermen often find glued to its head. 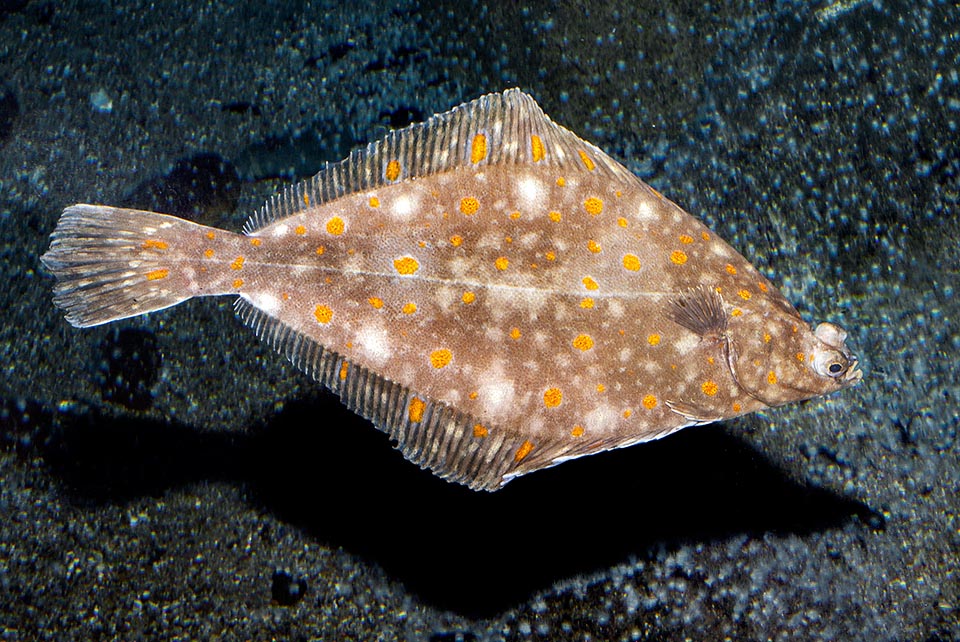 The shape, with stretched fins, is rhomboid and the reddish brown background can turn greyish or suddenly stressing the clear dots mimicry © Giuseppe Mazza

The Pleuronectes platessa is in its turn attacked by many species of fishes, mainly rays,sharks and conger eels, not to forget the seals and the dolphins.

It reproduces only once a year, mostly between January and April when the water reaches the 6 °C, but also in November or in June, depending on the zones. It seems that annual migrations take place towards the sites more favourable for the reproduction.

It has been noted, from the catch in the reproductive season, that a female produces 50.000 to 500.000 ovules. It seems that the fecundation is done at a depth of 20-50 m with eggs released every 3-5 days for about one month. They are floating, they measure little less of 2 mm, and are entrusted to the currents. They hatch in about one week, depending on the temperature of the water. 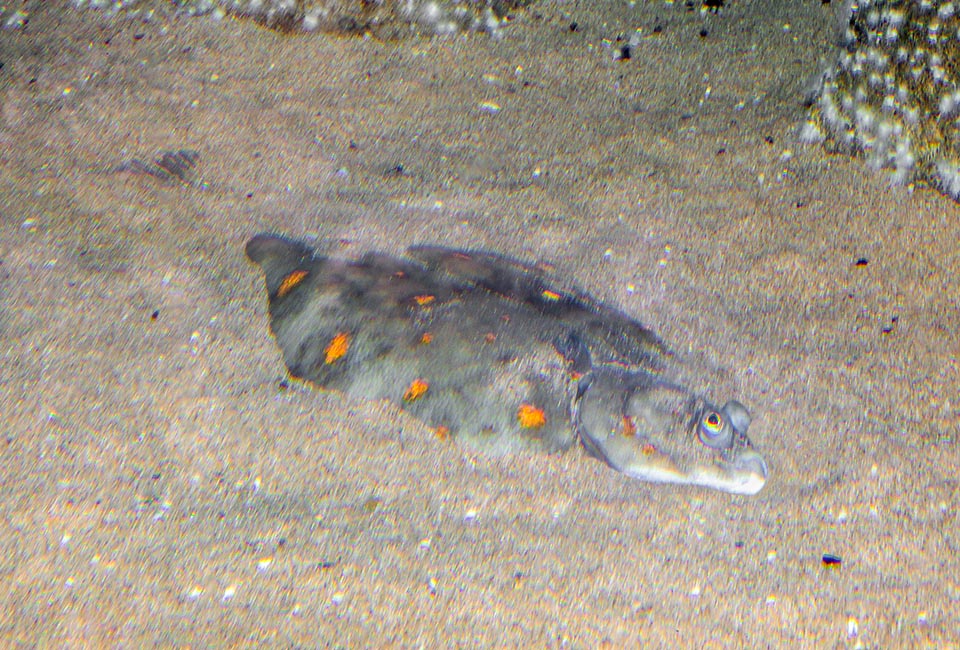 Here, imiting a rock, half covered by sand, on the bottom. It rests so during the day and goes hunting the night exploring bottoms © Giuseppe Mazza

When larvae are 10 mm long, the left eye begins to move on the right side, operation lasting a ten of days, whilst the pigmentation completes later on, when about 15 mm long. They grow along the beaches, in shallow waters, and only by the seventh month of life they go to deep waters.

The Plaice is the most caught flatfish in Europe, mainly with dragnets. They speak, globally, of 100.000-120.000 tons per year. In the northern countries it is often served in the “fast food” with the French fries, specially mostly too young for a fish planned to grow, with a lifespan of 50 years.

In some locations their number has collapsed, and the zones of reproduction of Kattegat, along the Danish coasts, have been abandoned due to the poisons connected with the agricultural acivities that reach the sea with the rivers floods. The Wadden Sea, between Holland and Germany, is still, conversely, a good nursery. 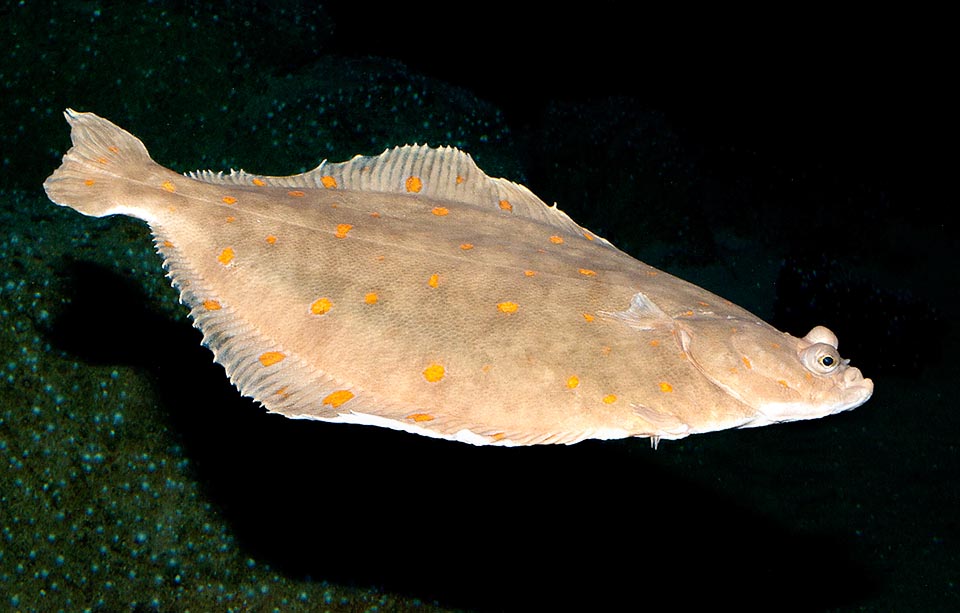 It eats polyketes, ophiures, crustaceans and molluscs. Is predated by many fishes, like rays, sharks and conger eels, but also by mammals as seals, dolphins and mainly men © Giuseppe Mazza

Hence, even if theoretically, the Plaice is a very diffused and proliferous fish, the points of view regarding the vulnerability of the species are nowadays (2020) fairly different.

For the IUCN, that for the calculation uses parametres such as the growth trend of the populations, the geographic distribution and the total population, is a “Least Concern” species, not yet then ready for the “Red List” especially because of the populations decimated by the events may double in the time of 1,4-4,4 years. Conversely, FishBase is less optimistic. Keeping in mind the human activities, and considering that it is a too much fished species, it assigns it a vulnerability index of 71 on a scale of 100.