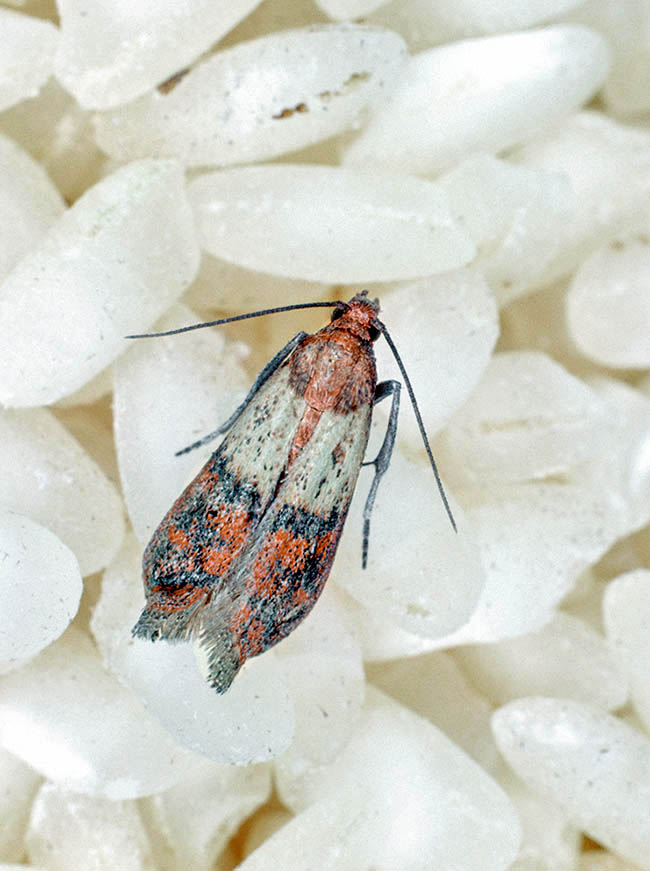 Plodia interpunctella, here on rice, is a small moth infesting the houses and the food stores all over the world © Giuseppe Mazza

The Indianmeal moth, described by Hübner as Tinea interpunctella in 1813, has been transferred, in 1845, to the genus Plodia created by Guenée, who has dedicated it to Plodia, character cited by Herodotus of Halicarnassus as the most beautiful among the Spartan women.

The specific epithet interpunctella, utilized by Hübner, refers to the dark small dots present at the base of the forewings.

The Lepidopteran affers to the family Pyralidae, that includes numerous species, amply diffused, called synanthropic because living associated with humans and whose larvae infest organic materials of vegetable and animal nature, as well as foodstuffs in the stores or in the houses.

Similar behaviour have other species of the same family, afferent to the genera Cadra and Ephestia that, at the larval stage, infest the same substrata but whose adults, unlike the Indianmeal moth, have wings devoid of drawings and with inconspicuous colours.

Believed to be of tropical origin, Plodia interpunctella is responsible for almost all food infestations caused by lepidopterans worldwide.

It is an insect very frequent in the houses, in the grain stores, in the silos and in the food packings with which they are transferred in even very far environments, in relatively short times compatible with the vital needs of the species.

The greyish adult’s body is about ten millimetres long. The head is reddish brown; the wingspan varies from fifteen to twenty millimetres. The wings are equipped with marginal fringes of small hairs, the proximal part of the fore ones is of yellow colour whilst the remaining part is brown-reddish, with coppery reflections and with two or three characteristic brown bands. The hind wings are white-greyish with a thin dark edging along the margin.

The eggs, white-greyish, have an oval shape, are about half a millimetre long and consequently are poorly visible without the help of a magnifying glass. 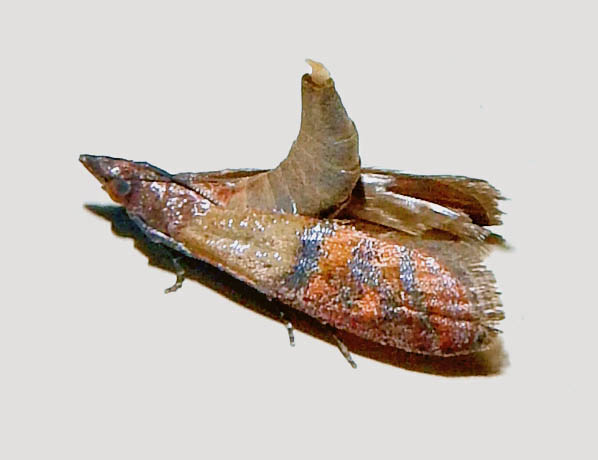 Virgin female of Plodia interpunctella with raised abdomen that releases the allure sexual pheromone for the males. In return these emit aphrodisiac substances that induce the females to mate © Santi Longo

They are laid on the food substrata one by one or in groups formed by ten to thirty elements.

The larvae are endowed with thoracic legs and with ambulacral mamelons, called pseudo-legs, in the abdomen.

They are called waxworms because of their resemblance with those of the Greater wax moth (Galleria mellonella) that are bred and employed in the animal feed industry.

The newborn larva measures about 1 mm with the whitish body, during the subsequent ages the colour varies from yellowish to beige, more or less dark, depending on the type of food eaten.

The pseudo-legs serve to cover relatively long distances while looking for a suitable site, on the walls or in the clothings, where to transform in pupa.

The strong mandibles of the buccal chewing apparatus allow the larva to pierce even plastic wrappings; whilst the jaws and the lower lip, partially fused, form, together with the distal part of the palps, the spinneret, structure from where the silk threads produced by the specialized salivary glands come out.

Other minute morphological characters are the presence of a characteristic thickening, crescent-shaped, at the base of the bristles located around the breathing openings (stigmi) from the first to the seventh abdominal segments.

The chrysalis is about 1 cm long, of brown-reddish colour, with dorsal keel, usually protected by a white silky, more or less thick cocoon. 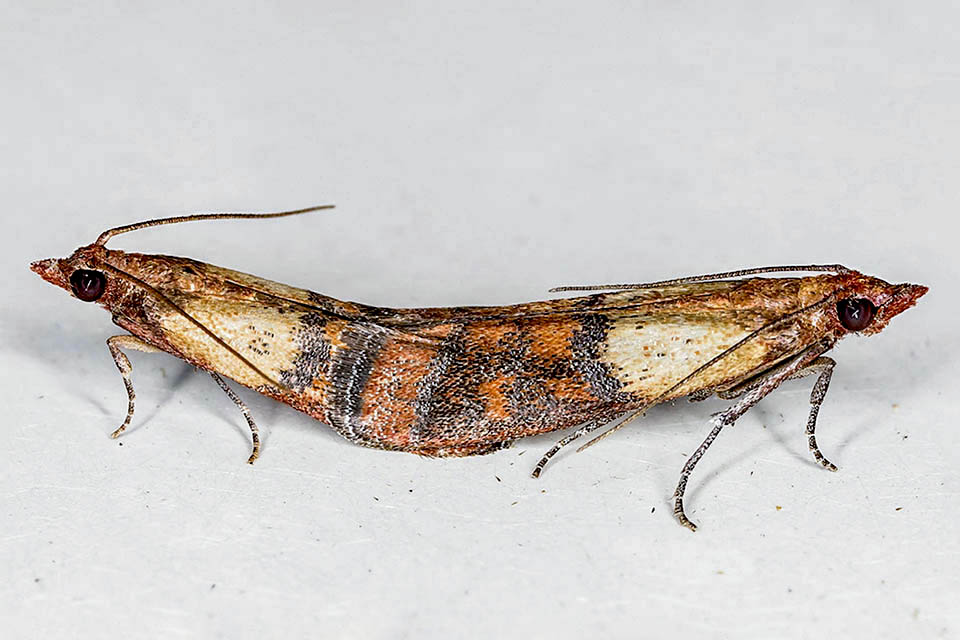 This occurs even shortly after birth, and in ten days a well-nourished female may lay, in several times, about 400 eggs © Elliot Lowe

In the tropical climates and inside conditioned environments, the adults of the Indianmeal moth are active during the whole year, whilst, in the regions with a temperate climate, the adults flicker starting from the end of February.

The females allure the males emitting attractive substances (sexual pheromones) at certain times of the day. These odourous molecules, dispersed in the air, are picked up by the males, even at considerable distance, by means of appropriate olfactive structures called sensilla placed in the antennae. The olfactory stimulus is “translated” in a motor stimulus that causes the male to fly towards the source of emission, for mating, following the odourous traces (trails, braids or “plumes”). 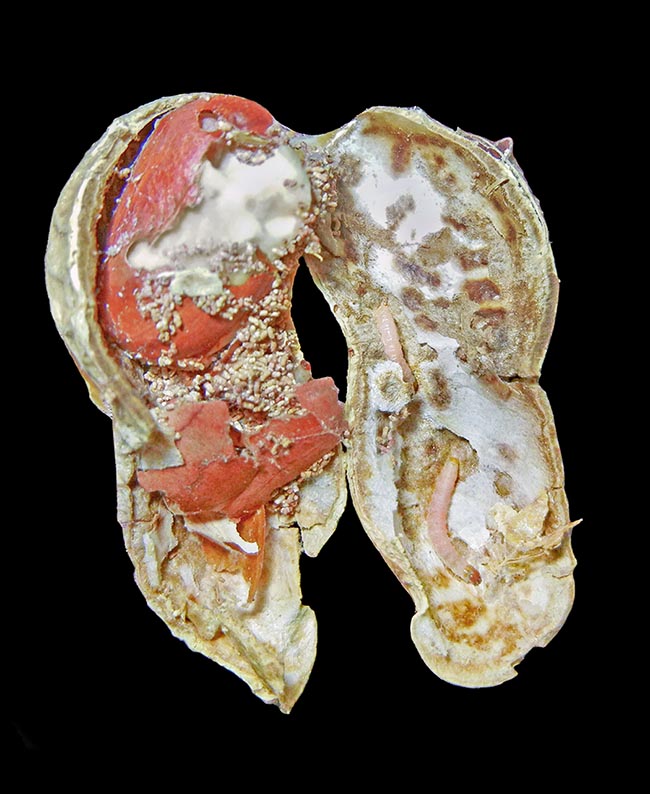 The sexual pheromones are often formed by mixtures (blends or bouquet) of substances in different ratios, depending on the species, each of which conveys a certain message.

The first pheromone has been identified and extracted in Germany by Butenandt in the late 1950s from a very high number of females of the Silkworm (Bombyx mori). Such a substance endowed with a very high attractive power towards males is called “bombykol”. Subsequent studies have evidenced the complexity of the pheronomic blends emitted by various species and the richness of the chemical language of the insects.

After mating, that may take place even in the same day of the flickering, and the fecundation, the females of the Indianmeal moth lay, over a period of ten days, up to 400 eggs; their number varies depending on the quality and quantity of food eaten during the larval stage.

The development cycle completes in an extremely variable period of time, from about one month up to almost one year. If the temperatures maintain constantly around the 30 °C, one generation from egg to adult may develop in little more than one month.

The newly born larva attacks the substratum immediately and builds a shelter with the secreted silk threads that will be thickened during the five or six larval ages that it crosses to complete the development.

During the last two of the five larval stages, they integrate their diet, essentially based on starches, with fat substances.  At temperatures around 25 °C, the larvae complete their development in two or three months.

When ripe they abandon the infested substratum and pupate inside fusiform cocoons open at the front.

The remarkable quantity of silky threads produced by the larvae, with which they cover the surface of the infested foodstuffs, hinders the dispersion of heat and causes the increase of the temperature and of the degree of humidity.

In the heavily infested warehouses, they can cause inconveniences to the augers of the lifting machines. 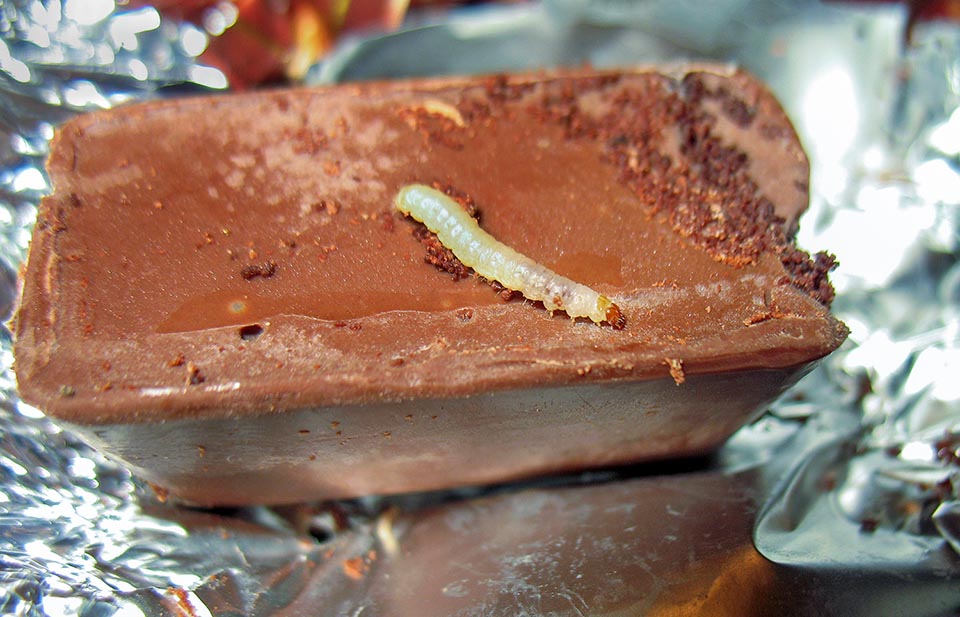 Nothing stops the solid larvae jaws. This one has even pierced the plastic casing of a gianduiotto © Santi Longo

The larvae live in the surface layers of the foodstuffs and therefore, become ripe, look for a sheltered location where to pupate in the cracks or in the crevices of the walls. The ripe larvae, depending on the photoperiod and on the density of the population, may undergo an optional diapause, and prepare a thicker silky shelter where they will build up to cocoon that will protect the chrysalis.0

Depending on the environment temperature, the pupal phase lasts one to three weeks; at 20 °C it completes in fifteen-twenty days, whilst at 30 °C in only seven-eight days.

In optimal climate and trophic conditions, the Indianmeal moth does, normally, six-seven annual generations. In environments having a continental climate, only one or two, whilst in those with Mediterranean climate they will be three to four, with flickerings from May to September and presence of adults almost throughout the year. 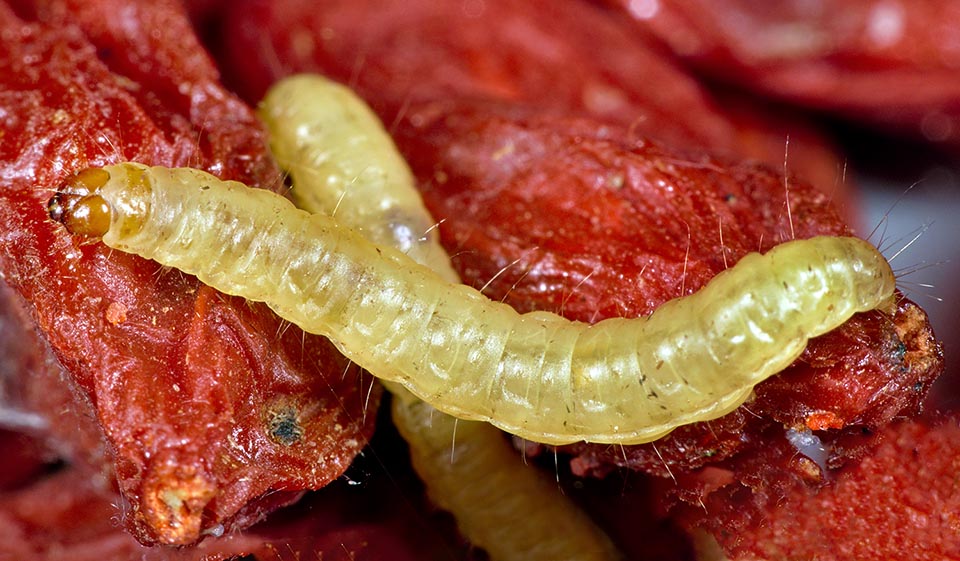 In the tropical environments it develops also in open air at the expense of hanging ripe sugary fruits, dried, or mummified, as well as of small dead arthropods. In the temperate climates the larvae overcome the cold periods in diapause and lengthen the duration of the chrysalis stage.

The main factors that hinder the development of the species are the temperatures under 8 °C and the low percentages of relative humidity (% UR). The food deficiencies cause phenomena of sterility in the adults and of cannibalism in the larvae. Moreover, numerous species of insects and parasitic mites cause high mortality rates. 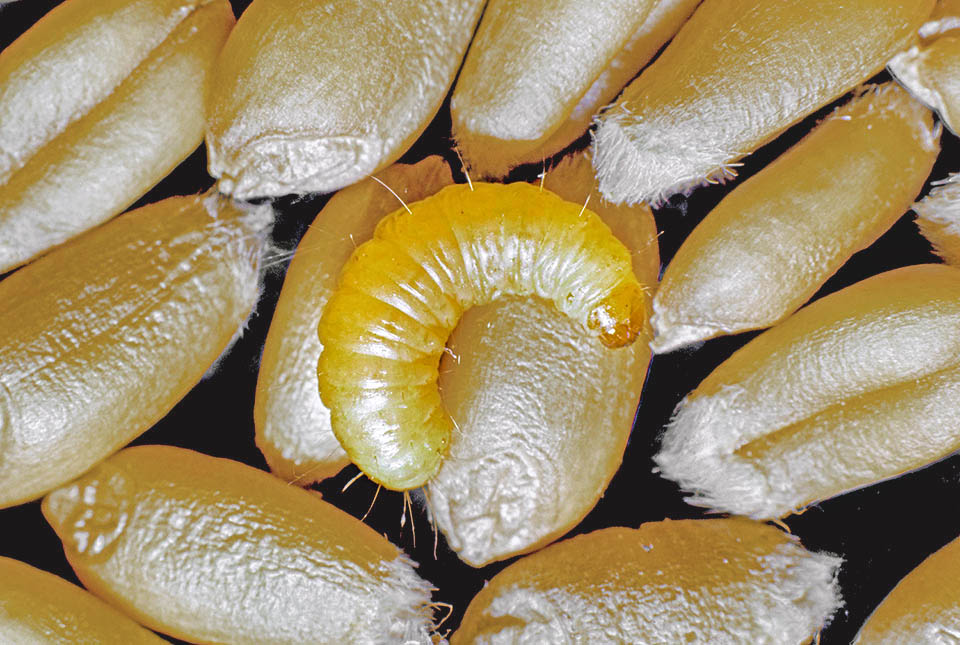 Mature larvae on wheat looking for a site where to pupate. In a few weeks. the whole contents of a silo may become uneatable © Giuseppe Mazza

The female of the parasitic Hymenopteran Venturia canescens, inserts its own eggs inside the eggs of the Indianmeal moth and the arva of the parasite consules its contents to complete its own development.

In the silos and in the food warehouses, an important rôle have some diseases caused by entomopathogenic bacteria and by viruses that cause infections, called granulosis. The affected larvae are little mobile and are devoured by the healthy ones that then get infected, and, if the density of population is high, may occur epidemics called epizootics.

In the warehouses and in the houses the presence of the Indianmeal moth can be detected and monitored by capturing the males, capture done with appropriate traps commercially available, that are triggered with a mixture of synthetic attractive substances, similar to the sexual pheromones, produced by the females. 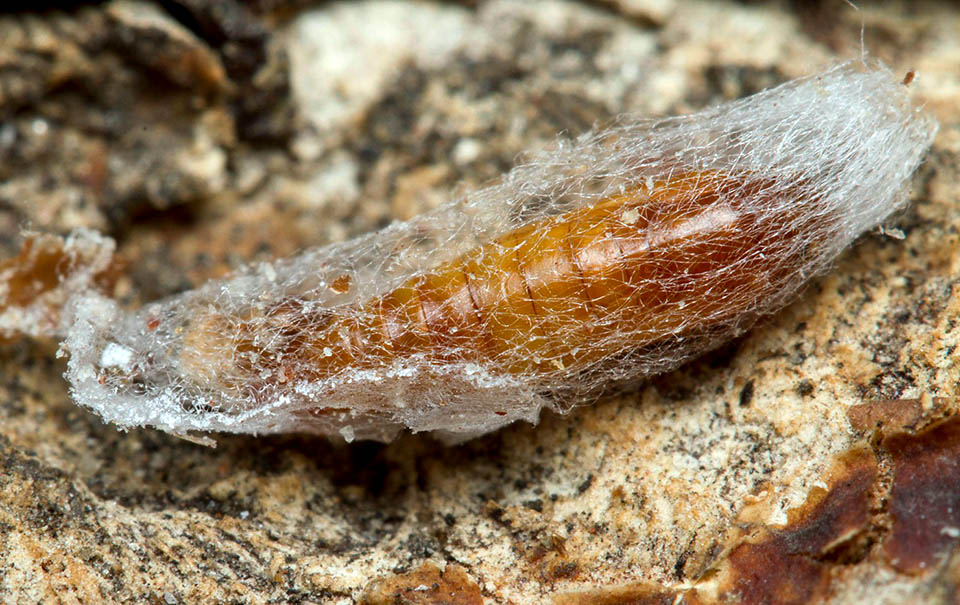 A silky cocoon protects the chrysalis. The duration of the pupal phase, depending on temperature, varies from one to three weeks © Ricardo Augusto Gomes da Costa

Numerous are also as well the common names with which the Indianmeal moth has been indicated in the various Countries, depending on the infested substratum or on its origin; most of them are those in English: Indian lotus, Indian mallow, Indian meal, Indian meal Moth, Indian millet, Indian mulberry and Indian Mutiny; in French it is called Pyrale des fruits sec; in Spanish