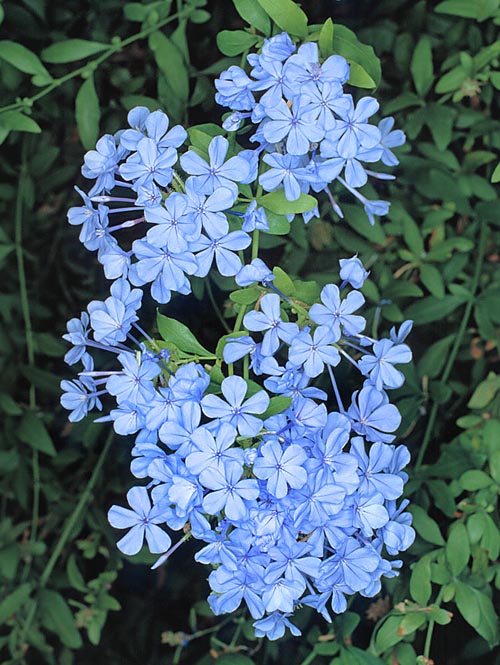 The species is native to the savannahs of Mozambique and South Africa.

The name of the genus is the Latin one used in the olden times for designating the Plumbago europaea; the name of the species comes from the Latin “auricula” = ear, with reference to the shape of the base of the leaf.

The Plumbago auriculata Lam. (1786) is an evergreen sarmentose shrub with much ramified stems long up to about 4 m, presents alternate sessile leaves or on a short petiole, simple, entire, elliptic, obovate or oblanceolate with base often auriculated (having two small ears), 2-8 cm long and 0,5-2,5 cm broad, of pale green colour.

The inflorescences, on a 1-5 cm long peduncle, hairy, are compact terminal racemes, about 6 cm long and up to 15 cm of diameter, carrying several hermaphrodite flowers with tubular calyx, 1-1,3 cm long, provided with short sticky glandular hairs, and tubular corolla 3-4 cm long with 5 obovate lobes, 1-1,6 cm long and 0,5-1,5 cm broad, in various shades of blue, also a variety with white flower does exist.

The fruits are oblong capsules, of about 0,8 cm of length, enclosed in the persistent calyx, containing only one seed about 0,6 cm long of brown or black colour. It reproduces by seed, in sandy loam rich of organic substance kept humid at the temperature of 20-22 °C, by division, through root suckers, which it abundantly produces and with which it expands so quickly to become infesting in favourable situations and semi-woody cutting in summer.

Species of easy cultivation and fast growth with flowering abundant and almost continuous all over the year, but the colder months when the temperatures drop under 10-12 °C, it is cultivable in the tropical and subtropical climate zones, and in warm temperate ones where temperatures little under the 0 °C may destroy the aerial part, but the plant is capable to grow again from the roots in summer if well mulched. It requires full sun for an optimal growth and is not particular about the soil, even if it prefers the sandy ones rich of organic substance, from slightly acidic to slightly alkaline ones, and, well rooted, can resist to drought periods.

Utilizable as soil cover, climber on supports or as drooper, for borders, also formal, and fences, in fact it stands well the prunings, even if drastic, to be done by the end of winter, which, furthermore, favour an abundant flowering; cultivable also in pot, in sandy loam rich of organic substance, with regular waterings and fertilizations during the summer.

All parts of the plant are utilized in the traditional medicine.

→ To appreciate the biodiversity within PLUMBAGINACEAE family please click here.