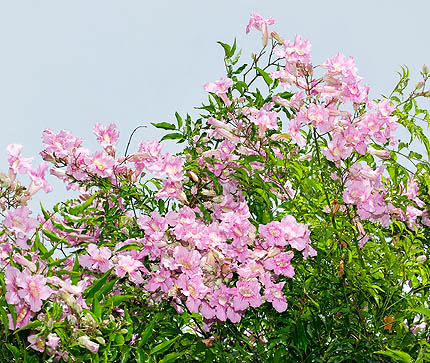 Common in Mediterranean area, but especially in the Tropics © G. Mazza

The name of the genus is the anagram of Pandorea, genus of Australian Bignoniaceae, where the plant had been inserted at the beginning; the species is honoured to the Florentine general and politician, Vincenzo Ricasoli (1814-1891), impassioned grower of exotic flora.

The inflorescences are terminal with several bell-shaped flowers of a pink colour with purple-red striae in the throat, 5-7 cm broad, slightly perfumed; the fruits are long and thin capsules containing many flat and winged brown seeds. It reproduces by seed, semi-woody cutting in spring-summer, air and ground layering.

The Podranea ricasoliana is widely spread plant in tropical and subtropical countries, and in particular in those with Mediterranean climate, it prefers a full sun exposition and rich and draining soils; when adult it can bear temperatures up to about -6°C, even if with the loss of the aerial part, but with a fast revival from the foot during the following spring. Seen its extreme vigour and speed of growth, it needs robust supports, on which to be guided and anchored, and suitable pruning, to be effected in winter, in order to keep its growth under control and to stimulate its blooming.