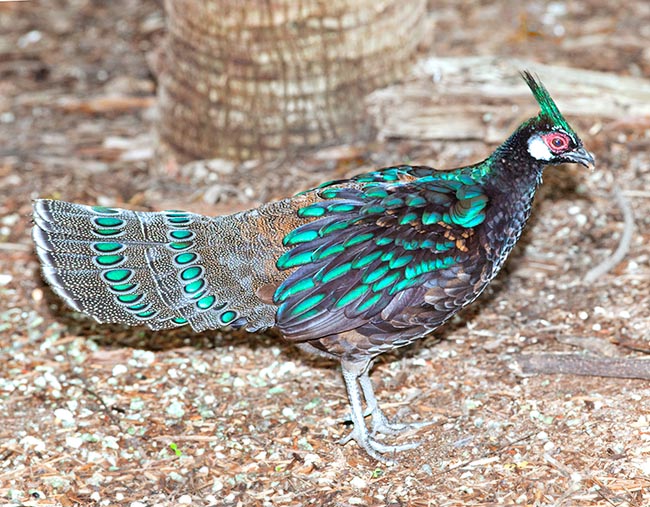 It belongs to the order of the Galliforms (Galliformes), to the well known family of the Pheasants (Phasianidae), to the genus Polyplectron and to the species Polyplectron emphanum.

The name of the genus “polyplectron” comes from the Greek “plektron” = plectrum, the instrument used for plucking string instruments, with reference to the spur. It is therefore a pheasant having paws with more spurs.

The common name of “pheasant” refers to the same particularity. The name of the species “emphanum” comes from the Greek “emphaino” and means “conspicuous, remarkable” referring to the splendid look of this bird.

As the name states, the species is distributed in the humid forests of the Pilipino island of Palawan; but also in the south-west of the Philippine archipelago.

The traditional habitat of this species is that of the coastal plains wood even if the species is present from the plain woods up to the limit of the areas with human presence and in the mountain woods up to about 600 metres of altitude. 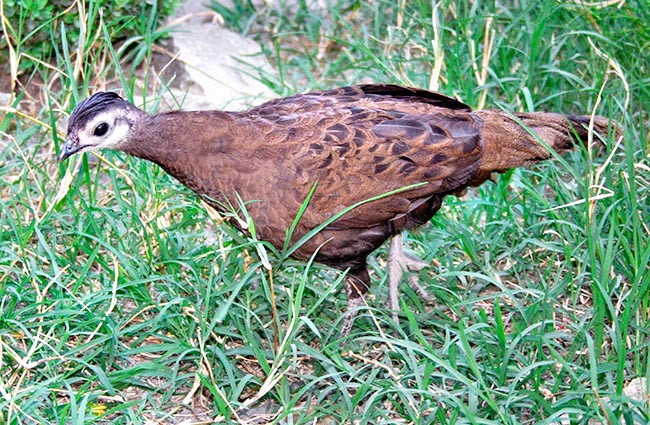 The female, without tuft and the splendid male colours, is markedly different © Gianni Ferretto

It is an under-wood and mature forest species.

The species clearly distinguishes from any other similar species belonging to the same genus, due to the male who is markedly different.

This has a long erectile crest, pointed and thick formed by black filiform feathers with green-enamel blue reflections. The abdomen, sides and thighs have a decided black colour.

The scapular feathers, the coverts of the wings and the tertiary feathers are of a showy glossy and changing blue colour with reflections turning green enamel and turquoise. The brightest portion of such spectacular colouration is localized in the distal portion of the feathers, which have black base, and form a whole of roundish-oblong drawings forming a group of spectacular big coloured “scales”.

The face, head and neck are black like the chest, with green-blue reflections especially in the dorsal parts (tuft and summit). The dark head lively contrasts with a wide roundish white spot placed at the level of each cheek. Some specimens can have also a vast eyebrow, always white, which starts more finely from the attachment of the beak and continues widening and extending up over the nape. These specimens usually have the white spot of the cheek drop shaped (with the thin part starting from the base of the beak).

Some breeders grow and maintain the two forms: “black-headed” and with head having an “ample white eyebrow” separate as if they were two different subspecies. 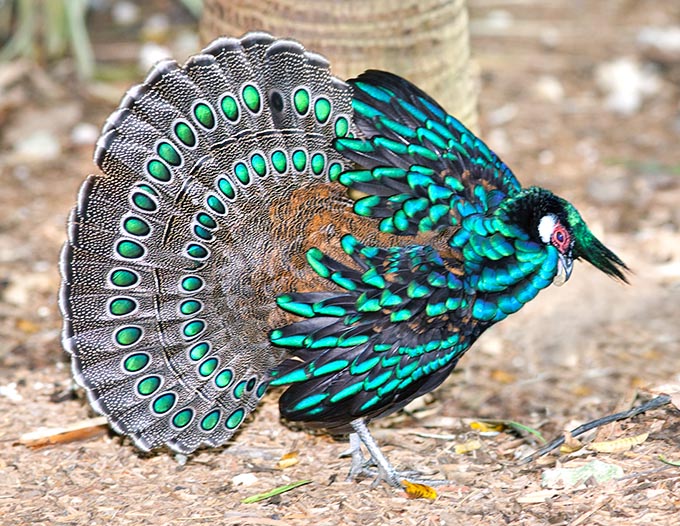 After other authors, the species is to be considered uniquely. The white eyebrows have, at times, variable extension and thickness depending on the subject and probably due to the matings done between the two forms. In the wild, it seems that the “black-headed” form lives in the shadiest plain forests whilst the form with the ample white eyebrow lives in more open forests.

The eye, which has brown-dark brown iris, is surrounded by a periocular ring and by a portion of bare red skin. The beak is grey-black with apex at times shaded of flesh colour.

The feathers of the back, of the upper-tail and the flight feathers are brown-grey-black typically dotted and marbled to form a thickly dotted and streaked drawing very typical of the pheasants belonging of this genus.

The tail ends in some black interrupted (at the level of each rectrice) sub-terminal lines and then white (more distal). On the numerous rectrices, more than 20, and on the coverts of the tail are present some roundish green-blue, bright ocelli bordered by a dark small line, and, after this, by a sort of pale greyish halo.

These changing spots, ovoid shaped, are placed at about half of each feather (two per feather) to form a double row of ocelli. The splendid drawing of the tail, as well as the maximum splendour of the back feathers, reach the top when the Palawan peacock-pheasant is courting its own female, opening and extending at the maximum the back feathers as well as those of the tail to form a fan recalling the tail of a miniature peacock; the Palawan peacock-pheasants are also called “pheasants-peacock”. 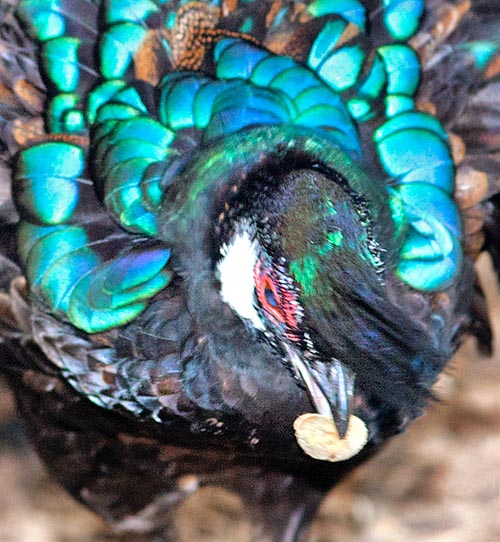 The tails, fan-opened, and having multicoloured ocelli, are typical also of the other species of peacock-pheasants. The paws are dark grey lead and, as the name states, can be endowed of numerous spurs (at times also in the females).

The female has brown reddish silt colouration shaded of dark, uniform, with few dotting limited to the tail. It has dark (sometimes with slight metallic hues) sub-terminal spots on the flight feathers and dark spots shaped like a “scale-hood” on the back. It does not have the male tuft (it has an only hint of the same) and the face is rather amply pale (dirty white) at the cheek level, supraciliary area and throat. The head does not have the portion of red bare skin.

The vast pale zone of the head joined with the scarce dotting-marbling of the livery allows to neatly distinguishing the females of this species from those belonging to other species of the same genus. The immature juveniles are already recognizable due to the bigger sizes; in particular, they are taller having longer legs.

Though being a terricolous species well camouflaging in the thick of the vegetation, the Palawan peacock pheasant can perform rapid, direct and fairly prolonged flights. For sleeping, the species utilizes elevated branches of plants. The Palawan peacock pheasant nourishes of any invertebrates, such as insects and their larvae, like ants and termites, molluscs, millipedes, small animals and of vegetables such as leaves, fruits, berries and seeds.

The male courts the female in a spectacular way, opening and spreading all the feathers of its back, wings and tail in a sort of prolonged fan, compressed and extended from the side where the female stands; that is almost wrapped and surrounded by the voluminous livery of the male. During this parade, the male emphasizes the splendid drawings and colours of its own livery.

The male, during the courting, often offers mouthfuls to the female which are “thrown” to this one with its beak.

This species, like the others of the genus, lays two eggs. The eggs have white and smooth shell, and are spawned directly on the ground; the nest can be almost or practically absent or may be formed by little vegetal material. The incubation, done by the female only, lasts about 19-20 days. The chicks, nidifugous precocious, are cared with love by the female and by the male too. 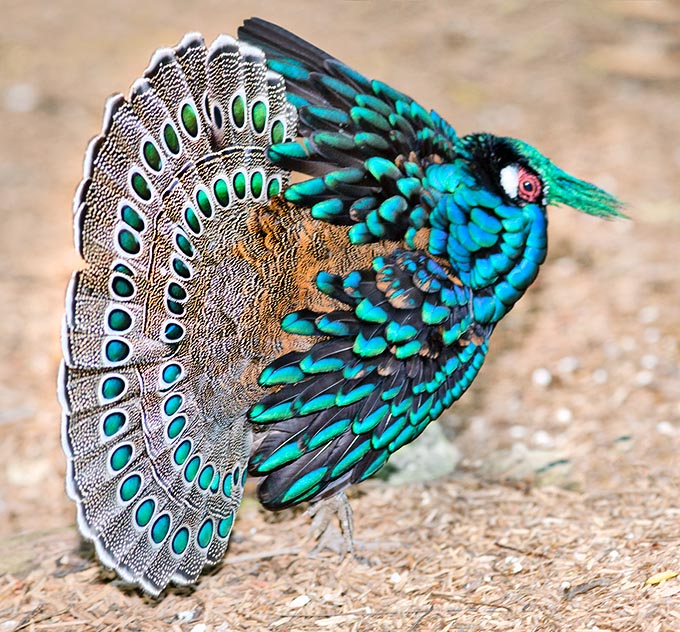 In fact, the species is monogamous and the males survey and protect the females while hatching before and the family later on.

The chicks have a brown fawn-chocolate colouration with the abdominal parts paler-yellowish-ginger coloured; on the back are present two parallel white-cream stripes. Even if the parents give their progeny the choice bites, they are, right away, excellent scratchers, able to find directly their food. The feathers of the wings of the chicks grow quickly allowing the young, after a few days, to be able to follow the mother on the branches for resting perched under its wings.

The Palawan peacock pheasant is endangered and vulnerable with its home range progressively reducing at the level of the coasts and narrowing on the mountains where the species has been often confined. The species stands in the appendix I of CITES.

Basing on the remaining habitats they estimate that the population is now of few thousands of individuals and rapidly declining. The Palawan peacock pheasant can be considered as an “umbrella” species to protect in order to safeguard the unique habitat where it lives and, as a consequence, the other hosted animals and vegetables which, in the same habitat, get shelter. Some local foundations have started to safeguard the species protecting and preserving the habitats where it lives: “the commitment, for this species, is heavy and must be maximum”. The Palawan peacock pheasant is vey much appreciated and sometimes bred by zoological structures and by private breeders all over the world. In captivity, outside from its home range, the species suffers from the too rigid climates and adapts to nourish of grains, fruits, vegetables and bred insects of good quality.

Polyplectron napoleonis (Lesson, 1831): after many authors, this is the name to attribute the species as assigned before the other one. The term “napoleonis” has been given honouring the French emperor, Napoleon Bonaparte (1769-1821); I must say the strutting and tufty appearance of this small pheasant can, really, remind the famous emperor. The Palawan peacock pheasant is indicated under this nomenclature also on the European Commission Regulation for CITES purposes.