Increasingly rare, the Yellowbar angel- fish (Pomacanthus maculosus Forsskål, 1775) belongs to the class of Actinopterygii, the ray-finned fishes, to the order of Perciformes and to the family of Pomacanthidae.

The name of the genus comes from the Greek “poma” = cover and “akantha” = spine, with reference to the spine on the operculum. The name of the species “maculosus” = mottled, spotted in Latin, evokes the typical yellow spot visible on the sides. 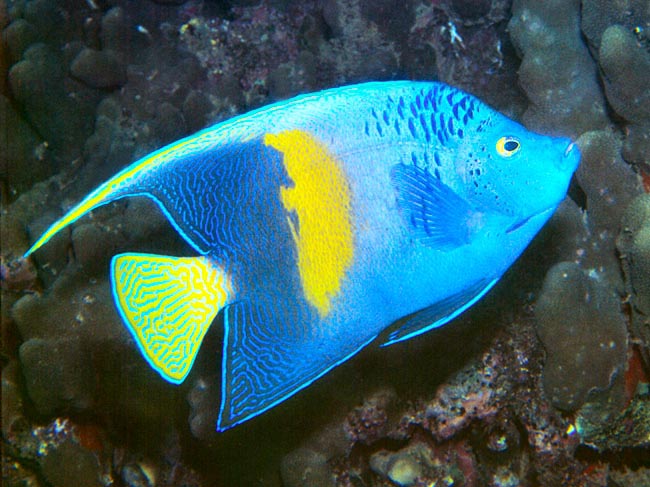 It is present in the western Indian Ocean, from South Africa and Madagascar up to the Red Sea and the Arabic Sea.

It lives in the madreporic formations up to 50 m of depth.

The yellowbar angelfish can reach the 50 cm. The body, more or less squared when the fins are spread, is compressed laterally with a showy spine at the base of the operculum as the name of the genus states.

But the most outstanding feature is the showy lateral yellow zone at the beginning of the second half of the body: some, poetically, see in it the map of a continent in the middle of the ocean, whence the French name of “Poisson Ange géographe” , which means “Geographic angelfish”, others a “crescent”, the heraldic term for indicating the quarter of the moon, whence the name, always in French, of “Poisson-Ange à croissant” (Crescent angelfish); the English, more pragmatic, talk generally of “Yellowbar angelfish” that is of “Angelfish with the yellow stripe”. Also the arabesqued tail has some yellow colour and the dorsal fin too, but all depends on the age of the fish. 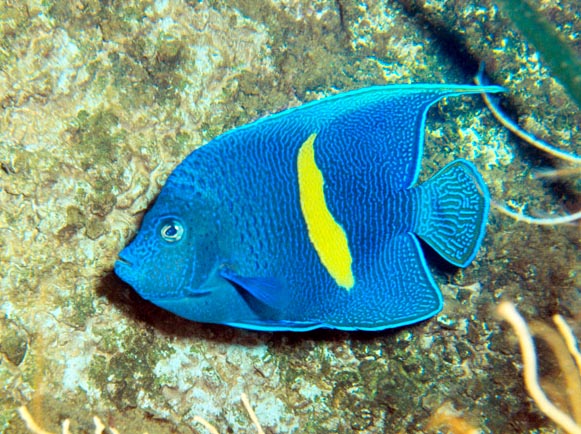 Too much fished for aquaria, it’s a vulnerable species © Giuseppe Mazza

The young adults have the tail arabesqued in blue and have brighter tints; the very young are black with blue and white vertical bands of various lengths and can be told apart from other species of angelfish youngsters by their yellow tail. The yellow lateral spot appears only by the 6-8 cm.

The Yellowbar angelfish swims usually alone or in pair, exploring the seafloors looking for sponges and ascidians of which chiefly it nourishes, without ignoring the crustaceans and eventual worms. It is a protogynous hermaphrodite species: at a certain point in their life, some females, while ageing, become males. The larvae are planktonic.

The doubling time of this species is very high, from 4,5 to 14 years, and then, kept in mind the climate changes which affect the animals of the reefs, and the fishing for the aquaria trade, raging on the juveniles preventing them from reproducing, the vulnerability index of the Pomacanthus maculosus is unluckily high: 61 per 100.