Common in public aquaria, the Bluegirdled angelfish (Pomacanthus navarchus – Cuvier, 1831) belongs to the class of Actinopterygii, the ray-finned fishes, to the order of Perciformes and to the colourful family of Pomacanthidae.

The etymology of the genus comes from the Greek “poma” = cover and “akantha” = spine, due to the presence of a showy defensive spine protruding from the operculum.

The name of the species comes from the Latin “navarchus” = admiral of the fleet, with reference to the blue band it carries as shoulder strap, like the admirals.

It is present in the tropical waters of the eastern Indian Ocean and of the western Pacific Ocean. Just to give an idea of its distribution, we find it at the Andaman Islands, in Indonesia, at the Palau Islands, in north Australia, in New Guinea, at the Solomon Islands, in Micronesia, Philippines, Taiwan and in the southern part of Japan at the Ryukyu Islands. Southwards, it reaches and stops at the Australian Great Barrier Reef.

It lives in the calm and clear waters of the lagoons, among the corals, and when the zone is sheltered, also on the outer side of the reefs up to about 40 m of depth. Being very shy, it keeps in the shade of the multilayered flat corals, ready to enter the labyrinths of their formation at the least sign of danger. 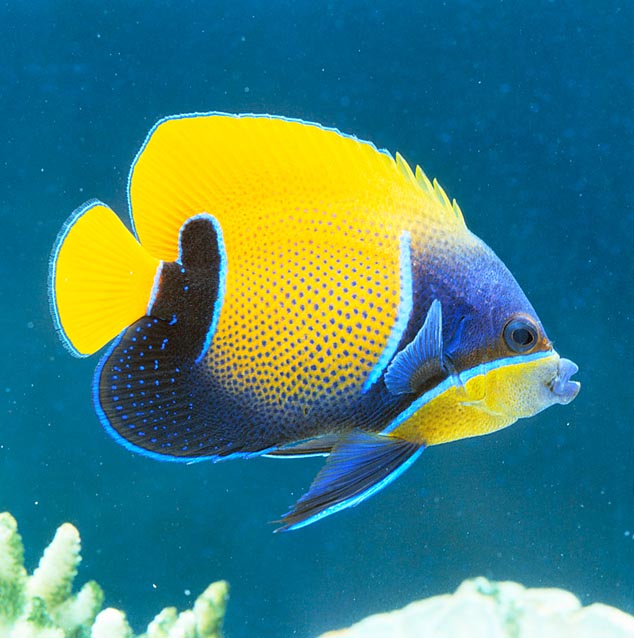 The juveniles are completely different: black with bluish vertical lines, more or less curved, and a transparent caudal fin. The yellow-orange colouration will appear later on, starting from the dorsal fin.

The bluegirdled angelfish lives solitary or in pair. It nourishes of seaweeds and of marine invertebrates, especially sponges and ascidians, which it nibbles with its robust lips and the numerous brush-like teeth. It is a protogynous hermaphrodite species: the females, in fact, can turn to male once a certain size is reached. The Pomacanthus navarchus may hybridize with the Pomacanthus xanthometopon.

Eggs and larvae are pelagic and its lifespan is of about 15 years. In the wild, the populations may double in 1,4-4,4 years and the species has a moderate vulnerability index: 32 on a scale of 100.