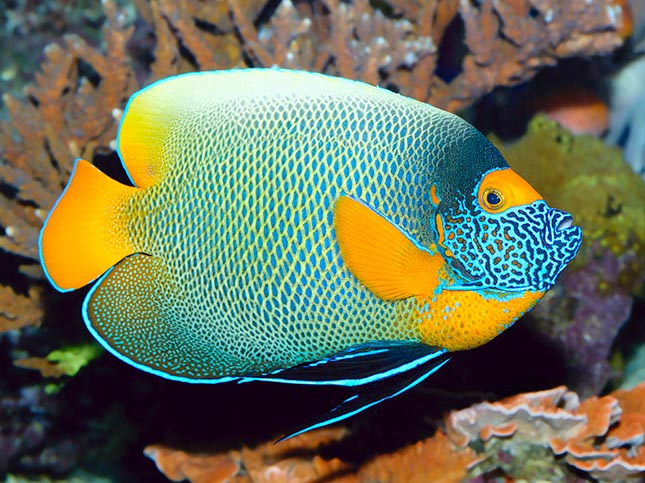 The colourful Blueface angelfish or Yellowface angelfish (Pomacanthus xanthometopon Bleeker, 1853) belongs to the class of Actinopterygii, the ray-finned fishes, to the order of Perciformes and to the family of Pomacanthidae.

The etymology of the genus comes from the Greek “poma” = cover and “akantha” = spine, due to the presence of a showy spine on the operculum. The name of the species always comes from the Greek “xanthos” = yellow, and “metopon” = front, with reference to the yellow-orange front of the fish that stands out on the blue head.

It is present in the tropical waters of the eastern Indian Ocean and of the western Pacific. Just to give an idea of its distribution, we find it at the Maldives, Andaman Islands, Vanuatu, Palau, Indonesia, Australia, New Guinea, Micronesia, Philippines, Taiwan and in the southern part of Japan at the Ryukyu Islands.

It moves around in the madreporic formations between the 5 and the 40 m of depth, also on the outer side of the reefs. It loves the rocks rich in hidings and the multilayered flat corals, placed one close to the other in colourful labyrinths, where it can go in order to escape the view of the predators and then to get out undisturbed from the back. 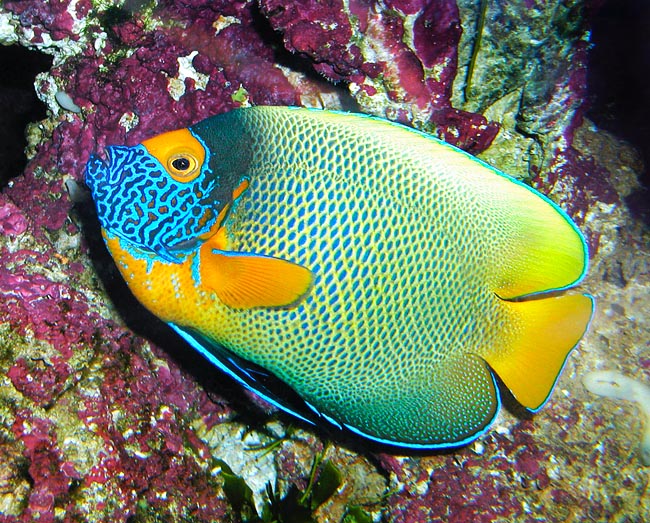 It's a hermaphrodite protandric species, that is with females turning males with the age © Giuseppe Mazza

The tail tends to yellow, whilst the pectoral fins are more orange like the zone under the operculum and the famous frontal band surrounding the eyes. The resulting blue facial mask shows numerous dark, at times black, arabesques. Also the zone over the frontal fascia is dark and at the back base of the dorsal fin some adults exhibit a big bluish spot which creates a false eye in retracted position.

All these colours, prima facie ostentatious, are, on the contrary, very much mimetic, because they break the contour of the fish and reproduce those of the adjacent madrepores. 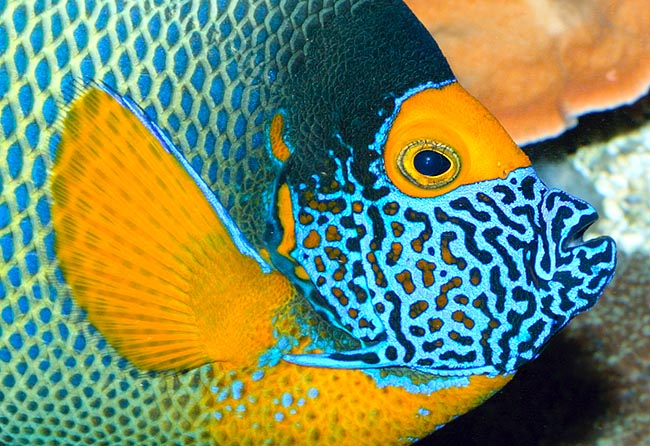 The Blueface angelfish lives solitary or in pair. It nourishes of marine invertebrates, mainly of sponges and ascidians, which it nibbles happily with the robust lips and the numerous teeth arranged like a brush, but also of algae.

It is a hermaphrodite protandric species, that is, with females which, ageing, and starting from a certain size, become males.

The couplings take place in surface with the simultaneous emission of the seminal fluid and of the eggs. These ones, like the larvae, are therefore pelagic and only after several weeks, starting from the size of 1 cm, the juveniles reach the coasts and the corals.

Their livery is quite different from that of the adults. In fact, initially the body is dark blue with four white vertical bands; then these get thinner and numerous and only when around the 10 cm the new generations get gradually the adults’ livery. Their life expectancy, observed in aquarium, is of about 30 years. The Pomacanthus xanthometopon can hybridize with the Pomacanthus sexstriatus and the Pomacanthus navarchus. The populations, in nature, may double in 1,4-4,4 years and the species has nowadays reached a moderate vulnerability index: 36 on a scale of 100.