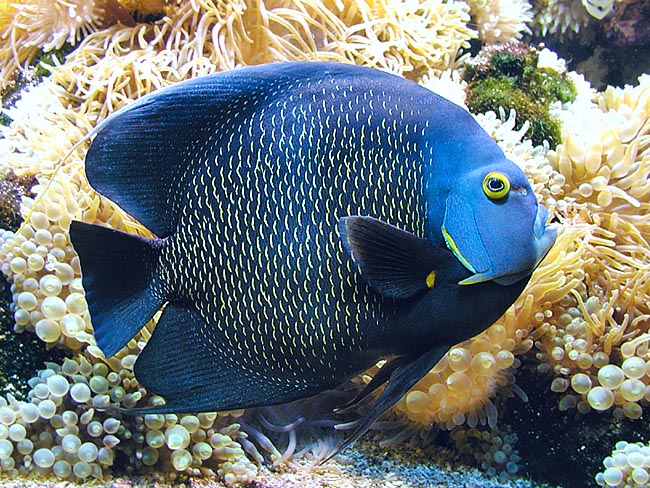 The French angelfish (Pomacanthus paru Bloch, 1787) belongs to the class of Actinopterygii, the ray-finned fishes, to the order of Perciformes and to the family of Pomacanthidae.

The etymology of the genus comes from the Greek “poma” = cover and “akantha” = spine, due to the presence of a showy spine protruding from the opercular zone.

The name of the species “paru” does not come from the Greek or the Latin but from the local Brazilian name “paru-preto”, of Portuguese origin.

It is present in the tropical waters of the Atlantic Ocean, mainly in the American ones.

Even if, as it’s suggested by one of its vulgar names, it’s at home in the Caribbean, it has, in fact, colonized Ascension Island, closer to Africa than to South America and the St. Paul’s Rocks Archipelago.

It usually lives between the 5 and the 25 m of depth, among the corals, the madrepores and the rocks where t finds food and shelter, but also on the outer side of the reefs, in the middle of the currents, up to 100 m. 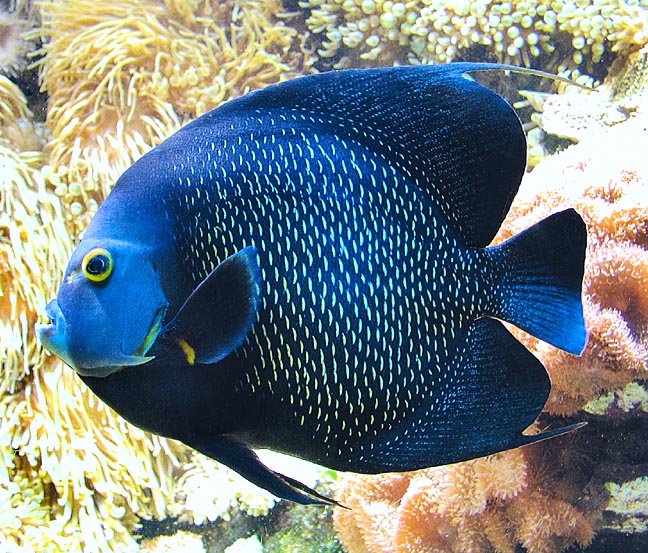 The juveniles, completely different, are black with 4 yellow vertical bands, more or less curved, and an almost triangular profile.

The French angelfish is omnivorous. It nourishes of seaweeds, tunicates and of sponges like Myrmekioderma styx, Desmacella meliorata, Anthosigmella varians, Ectyoplasia ferox, Pseudoceratina crassa, Plakortis angulospiculatus and the members of the genus Cliona; polyps of cnidarians of the genera Plexaura and Pseudoplexaura, not to forget of the crustaceans and other benthic animals. The juveniles, like those of the Holacanthus bermudensis often act as cleaning fishes, freeing, like the Labroides, various ichthyic species from their ectoparasites.

It is a protogynous hermaphrodite species: the females, in fact, may transform in males, once a certain size is reached. It lives alone or in pairs which defend vigorously their territory. The marriages, with the dispersion of the eggs and the fecundation, take place early in the morning in surface. The larvae are pelagic and the young install among the corals only starting from the length of 15 mm.

Present in almost all the public aquaria, thanks to its beauty, the easiness of alimentation and the fact that it can live even 10 years, the Pomacanthus paru is also sporadically consumed by the Caribbean fishermen, careless of the risk of ciguatera, a serious alimentary intoxication connected to the presence of venomous organism in their diet. In the wild, the populations can double n 1,4-4,4 years and the species has a moderate, but already worrying, vulnerability index of 39 on a scale of 100.

Pomacanthus paru was last modified: May 9th, 2021 by Giuseppe Mazza