The species is native to Colombia, Ecuador and Venezuela where it grows in the humid forests between the 1500 and the 2700 m of altitude. 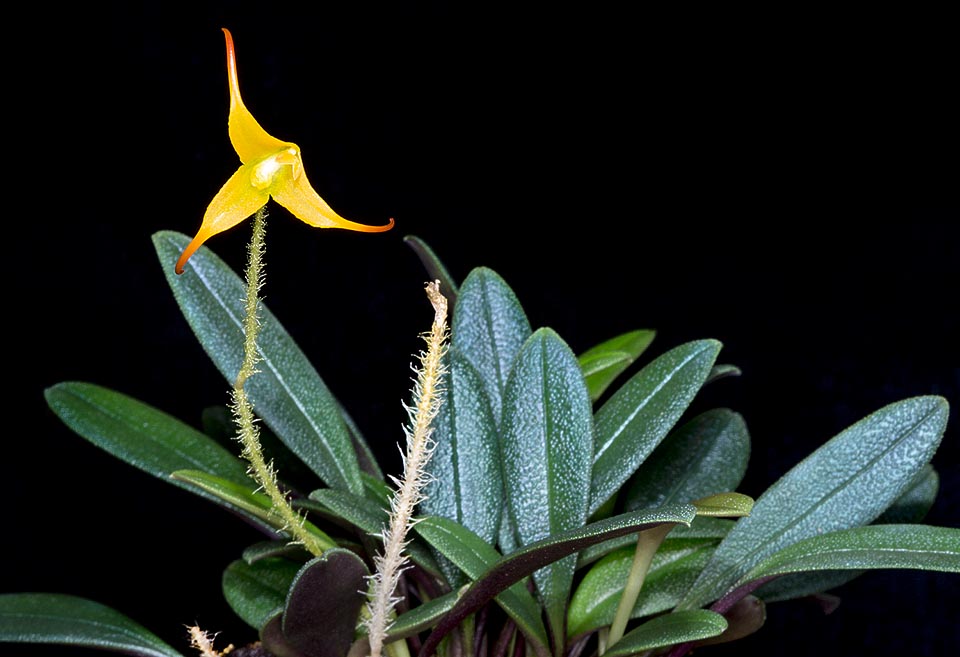 Epiphyte or lithophyte in Colombia, Ecuador and Venezuela humid forests at altitude, Porroglossum muscosum tends to form tufts, starting from a creeping rhizome with many small stems having only one 5-12 cm leaf. Inflorescences on hairy peduncle, as the specific name states, with few flowers opening gradually © Giuseppe Mazza

The Porroglossum muscosum (Rchb.f.) Schltr. (1920) is a caespitose species with creeping rhizome, usually epiphytic, at times lithophytic, with erect stems, 1-4 cm long, bearing at the apex an oblong to lanceolate leaf with pointed apex, 5-12 cm long and 1-2 cm broad, thick, fleshy, wrinkly above, of dark green colour. Erect racemose inflorescence, on a 10-25 cm long peduncle covered by a thick and long down, bearing few flowers, opening singly gradually, with greenish or pale brown sepals, whitish or pale brown petals and white labellum suffused of purple, also yellow individuals do exist (see photo). Ovate sepals united a the base, about 0,7 cm long, with filiform fleshy appendage at the apex, 1-2 cm long, lanceolate petals about 0,5 cm long and 1-2 mm, and obovate fleshy labellum, about 0,5 cm long and 0,4 cm broad, finely ciliate at the margins. 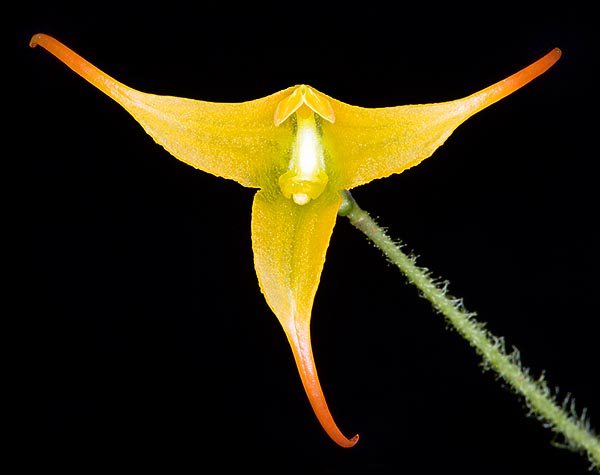 The labellum has the unique characteristic of being particularly sensitive to the solicitations (seismonasty), when an insect settles there, it slowly raises at the beginning, for a very short time, in order to allow it to enter completely into the “trap”, then springs pushing it against the column and imprisoning it, thus to the insect remains only one obliged way through which to get away and it does so dragging with itself the pollens, then, settling on another flower, the mechanism repeats and the pollens are deposited on the stigma. After 20-30 minutes from the stimulation, the labellum resumes the normal position. The labellum shows also the phenomenon of the nyctinasty, during the night it raises and closes the column, then at daybreak lowers in order to be ready to receive the pollinating insects. These phenomena have a certain similarity to that, for instance, well known, of the Mimosa pudica. It reproduces by seed, in vitro, and by division.

The main attraction of this orchid, yet rarely cultivated, is the particular mechanism of pollination that since ever has drawn the attention of the scholars. It requires a shady position, intermediate temperatures, 16-28 °C, with lowest winter values not under the 12 °C, high atmospheric humidity and constant ventilation. Regular waterings, thus to maintain the substratum constantly humid, but without stagnations, cause of rotteness, utilizing rain water, demineralized or by reverse osmosis. Monthly fertilizations, from spring to autumn, with hydrosoluble balanced product, with microelements, at ¼ of the dosage suggested on the package. It can be mounted on trunks, bark pieces or rafts of cork or of roots of arborescent ferns covered by a layer of moss, or cultivated in pots or baskets with medium sliced fragments of bark and of charcoal and moss. Transplants and repottings are to be done at the vegetative restart.