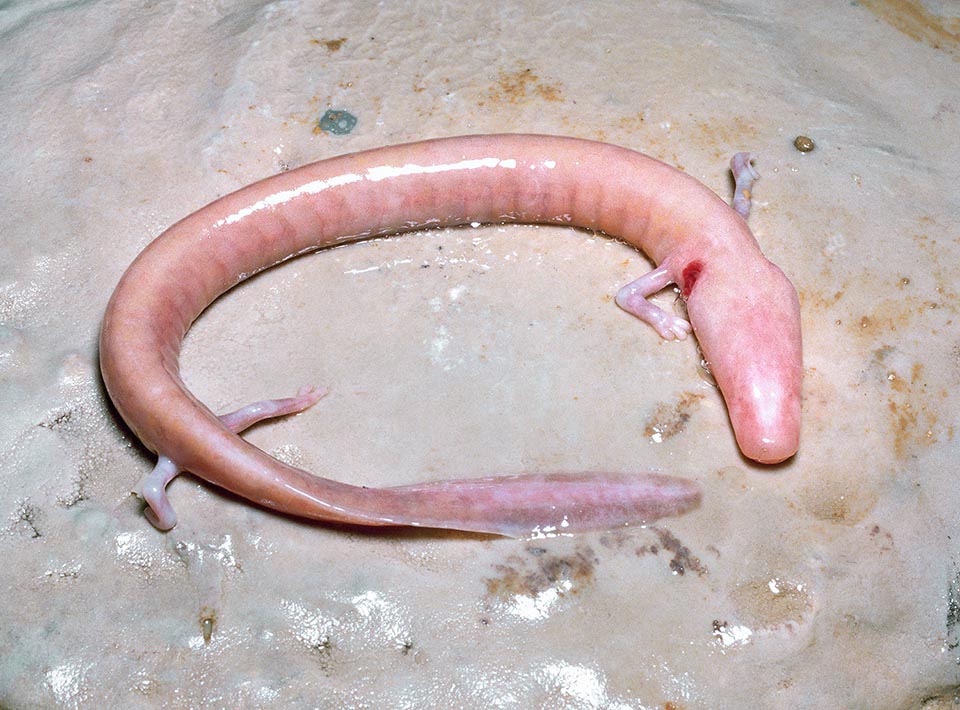 The Proteus (Proteus anguinus) is a species endemic to the flooded caves of the Dinaric Karst where it eats insects’ larvae, mollusks and crustaceans © Giuseppe Mazza

The Proteus, Proteus anguinus Laurenti, 1768, is a caudate amphibian belonging to the family of the Proteidae, present exclusively in the Dinaric Alps.

The Proteus is the only extant species of the genus Proteus, that however presents other species in the fossil record.

The name of the genus Proteus comes from the Greek god Pròteus, from the Greek language “πρῶτος” (protos), meaning first, as well as “πρωτόγονος” (protogonos) meaning primeval or also born first.

The specific term anguinus means in Latin resembling a snake, with obvious reference to its look. 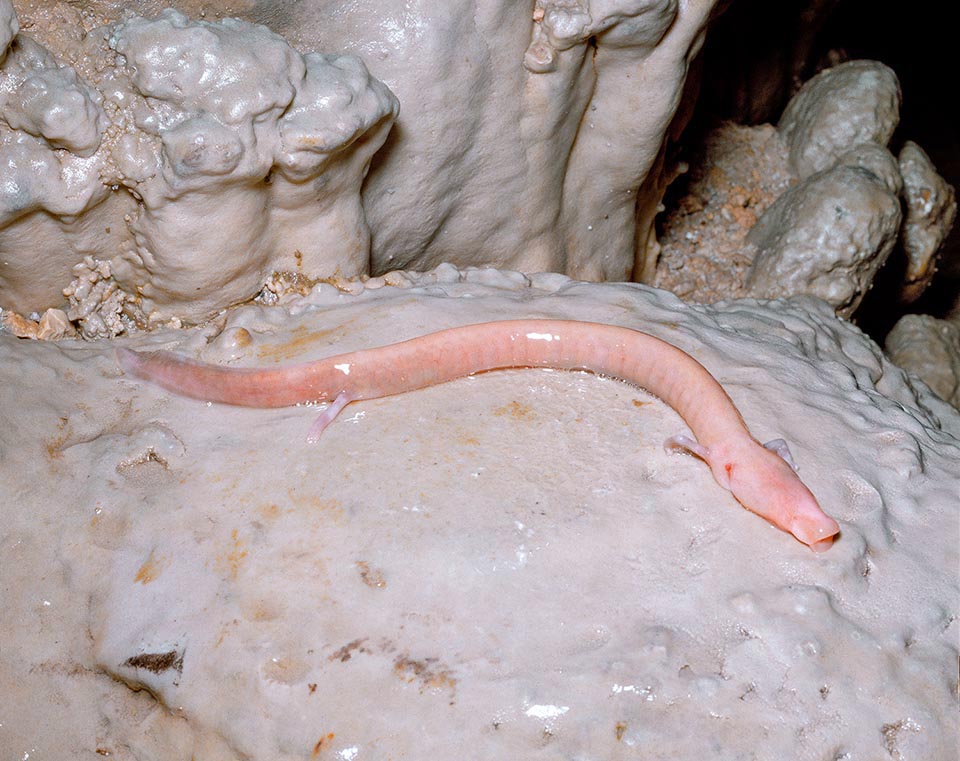 The very long body allows it to develop a greater number of sensory receptors, to compensate for the almost total loss of the eyesight © Giuseppe Mazza

The distribution area of Proteus anguinus is quite limited. It can be found in the underground environments of the Karst Region, along the Adriatic coast, from the North-East of Italy and from southern Slovenia, up to western Montenegro. Outside its natural range, the Proteus has been introduced inside several grottoes in Europe, where it has stabilized, forming reproductive communities. Some examples are the grottoes of Oliero near Vicenza, the grottoes of Moulis in the French Pyrenees. In southern Slovenia is present a subspecies called Proteus anguinus parkelj.

The Proteus is a stygobitic species, that is, living in an aquifer cave environment, particularly in the underground systems that are created by the karst phenomena. It loves still water, oxygenated and at a temperature between the 8 and the 14 °C. Besides the natural grottoes it may be found also in abandoned mines. The maximum depth where this species has been observed is of -300 m. Occasionally, some individuals may be found at the surface due to flooding, that can bring them closer to the entrances of the grottoes or that make accessible some passages to the surface. 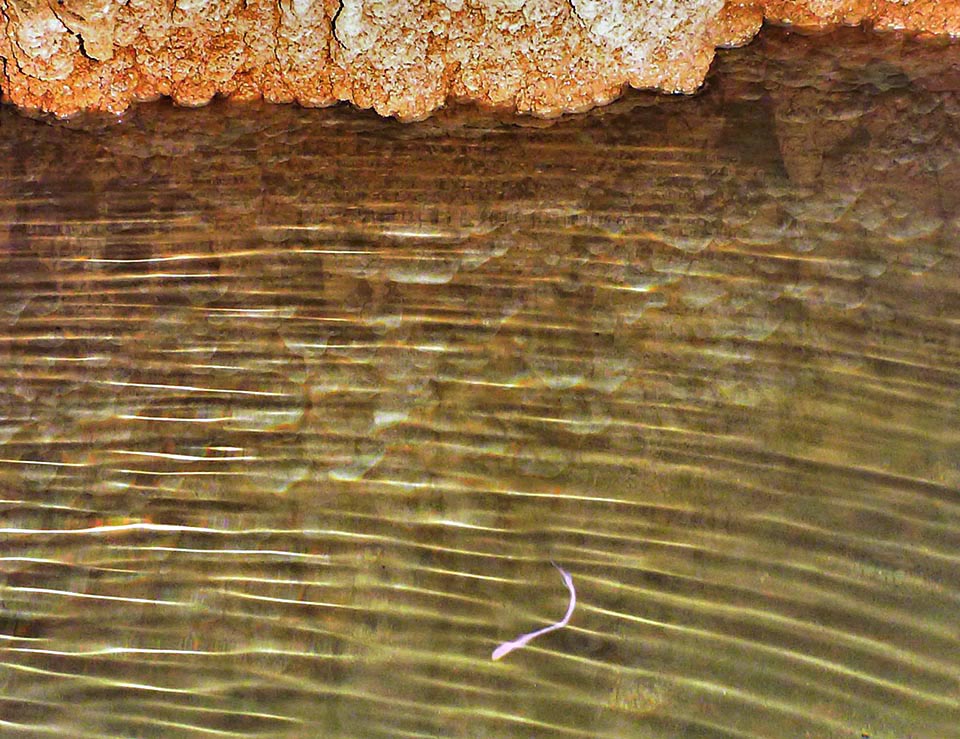 It is a stygobitic species, that is present only in the cave’s watercourses, but after heavy rains if these increase the level, may be found even in open air © Sebastian Voitel

The diet of the adult individuals is formed by a vast diversity of animals, mainly larvae of insects such as trichopterans, ephemeropterans, plecopterans and dipterans, but also gastropod mollusks and amphipodan crustaceans. The diet of the young and of the larvae is quite different, as they mainly nourish of bacteria, protists and organic substances.

Proteus anguinus is an urodele that may reach important dimensions. The total average length is about 25 cm, but may grow up to 30 cm, and in some instances even more. An example are the individuals of the subspecies Proteus anguinus parkelj, that can grow even over 40 cm.

The Proteus presents a slender and elongated body, with a flattened and short tail, small limbs having the forelegs presenting 3 toes, whilst the hind ones have only 2. The head has an elongated shape, with rounded snout and little developed eyes, covered with epidermis. The skin is translucent and allows to observe the outlines of the internal organs in the ventral part of the body, making easier the identification of the sex in the adults. Once the colour so white had led to thinking of a case of albinism. However, from recent studies it has been noted that the young, if exposed to the light, develop darker spots, thus demonstrating the presence of melanin, and consequently refuting the hypothesis of albinism. 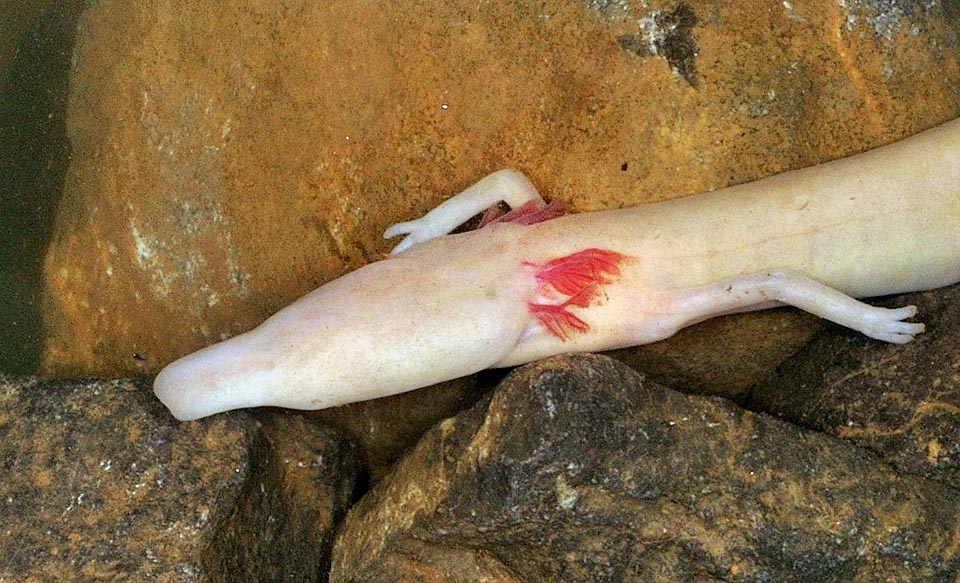 This species is a paedomorphic obliged species, hance has lost totally the capacity of metamorphosing, unlike other species, like Ichtyosaura alpestris, that are optional paedomorphic and that therefore, depending on the environmental conditions, may or may not metamorphose. As a matter of fact, the Proteus presents well evident external gills, formed by three pink tufts on both sides of the head.

The respiration occurs mainly through the gills and the epidermis, but in conditions of poor oxygenation utilizes also the breasts. Despite being unable to use its eyesight effectively, the Proteus has developed a number of sensory adaptations to the stygobitic life. The shape of the body and of the head, very elongated, is not casual, but rightly serves for carrying more sensory receptors. These receptors help it in the capture of the preys, such as the chemoreceptors, mechanoreceptors and electroreceptors as well as in other vital functions like the perception of light, photoreceptors or the orientation in space, geomagnetic sense.

The subspecies Proteus anguinus parkelj presents different morphological characteristics. Beyond the larger size, it presents a darker skin pigmentation, so much that it is defined as a “black” subspecies or black Proteus, head shorter and functional eyes. Among all species of amphibians, it seems that the Proteus is the longest living species. The average lifespan of an individual is 68,5 years, whilst the expected maximum duration is of more than one century. Probably this longevity is due to the metabolism of this animal, which may be extremely slow. 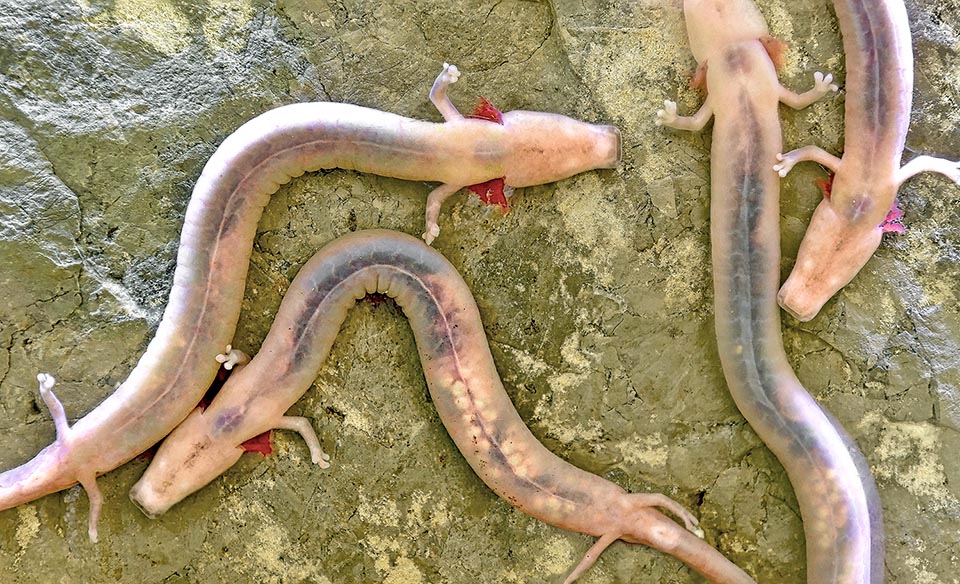 The skin, translucent, allows us to observe its organs, here also the eggs. Proteus anguinus may live 100 years but it’s already shown as “vulnerable” in the Red List © Thierry Balint

Proteus anguinus is an oviparous species. Its reproductive period goes from January to June.

The males fix their own territory, that is furiously protected from the other competing males. When the female enters the territory of the male, the courting can begin. First, the male moves its tail towards the head of the female, and then rubs the cloaca with the snout. At this point also the female touches with its snout the cloaca of the male, and then follows it in a short walk of about ten centimetres, at the end of which the male releases one spermatophore, that will be collected by the female through the cloaca.

After 2-3 days the female begins the deposition of the eggs which may last about 25 days. On average, 35 eggs are deposited, with a maximum of 70, and are placed under the rocks. The diametre of the eggs upon the deposition is 4-5 mm and may reach 8-9 mm. The development of the eggs takes place within 182 days at a temperature of 8 °C, 140 days at 10 °C, 123 days at 11 °C and 86 days at 15 °C. The hatching occurs after 10-15 days, whilst the metamorphosis occurs within 1-2 months. The sexual maturity is reached between 10 and 14 years for the males and between 15 and 18 years for the females. The development of the larvae strongly depends on the temperature, and at 10 °C will be necessary other 14 years to reach the sexual maturity.