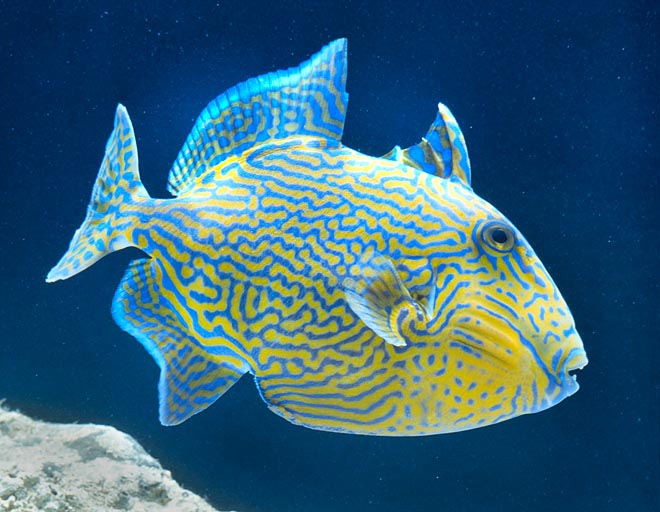 The showy Yellow-spotted triggerfish (Pseudobalistes fuscus Bloch & Schneider, 1801) belongs to the class of Actinopterygii, the ray-finned fishes, to the amazing order of the Tetraodontiformes and to the family of Balistidae, the trigger fishes.

The name of the species comes from the Latin “fuscus” = dark, with reference to the midnight blue livery on which stands out, at times, a yellow pattern.

In Italian it is also named blue triggerfish, but this often creates confusion with the Odonus niger, by sure smaller and with a much more slender shape.

It is present in the tropical waters of the Indian and Pacific oceans, where however it is more rare. We find it, as an indication, along the African coast, from South Africa to the Red Sea, to the Seychelles, Mauritius, Réunion and Maldives, in India, Sri Lanka, Thailand, Australia, Indonesia, New Guinea, Micronesia, Philippines, Taiwan and China up to Japan. Eastwards, it has colonized Samoa and the Society Islands. Southwards, it reaches Tonga and New Caledonia.

It lives in the madreporic formations, usually between the 30-50 m of depth. 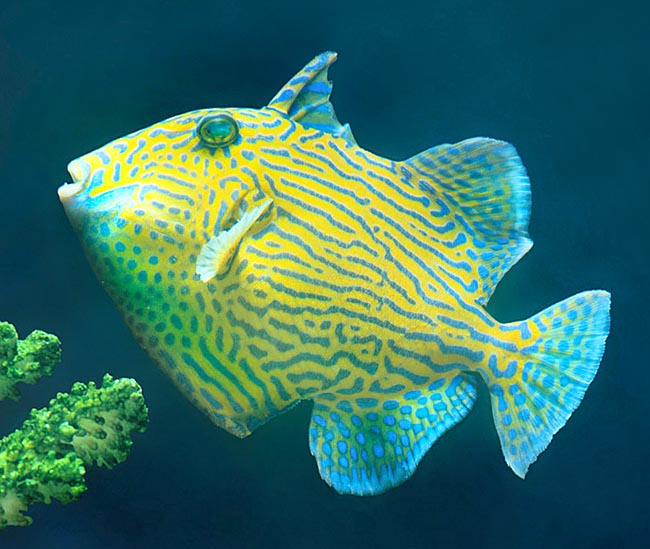 Changeable livery. In the young the yellow arabesque prevails, the contrary in adults © Giuseppe Mazza

It can be 55 cm long. The body is flat, ovoid, protected, like all triggerfishes, by a solid coating of bony scales. The first dorsal fin is an erectile trigger formed by three spiny rays which the animal may block in vertical position for defence. Typical of the Balistidae, it keeps armed even when the animal is dead, and the first spine, long and sharp, often discourages the aggressors. It is furthermore useful for entering shelters with small entrance with the fin lowered down and then arms it and sleeps soundly, safe from large predators, and without being taken out by the currents.

In the livery of the juveniles the yellow arabesque on the blue background prevails, in the adults it’s the contrary.

As it is usual among the triggerfishes, it digs a nest in the sand with water jets from the mouth and after the spawning the female keeps the watch till the hatching of the eggs attacking the intruders with ferocity. 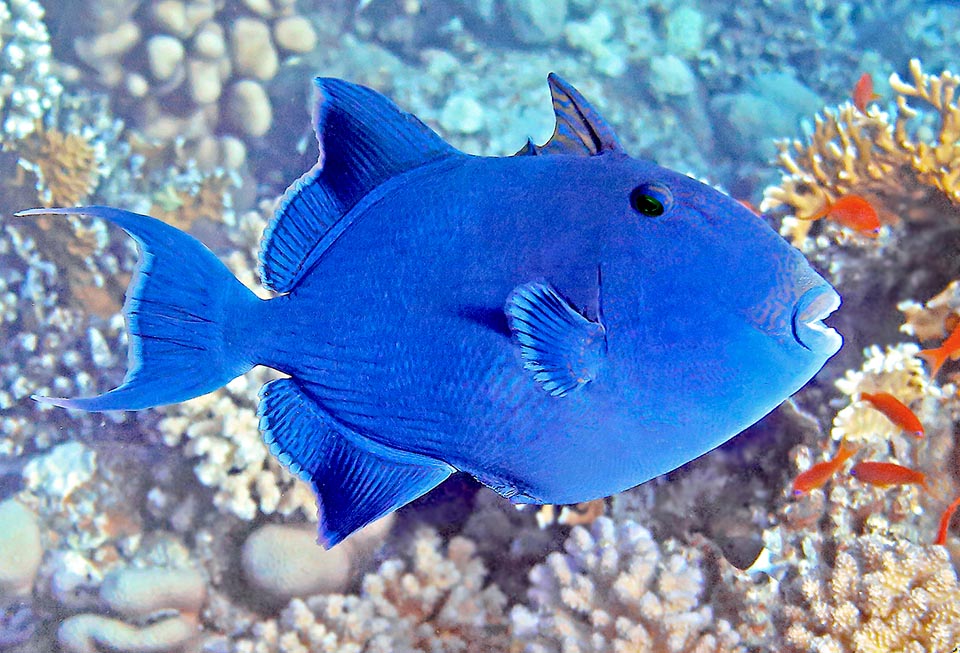 Beautiful old specimen. Due to its size, the Pseudobalistes fuscus is often fished and consumed fresh or dried by the local populations © Gianemilio Rusconi

The less than 5 cm long juveniles have black spots on the back and dark undulated lines more or less interrupted. Then appear some bright blue lines, so much unevenly that the fish, with an unbelievable detachment, may have a blue background in the upper mid and yellow in the lower one. Finally, the yellow with the blue veinings intensifies: this is the most beautiful livery, which fades with the time to become of an almost even dark blue.

Due to its size, the Pseudobalistes fuscus is often fished and consumed fresh or dried by the local populations. The members of the species may double in 1,4-4,4 years, but the vulnerability index is to be watched because we have already reached the 43 on a scale of 100.